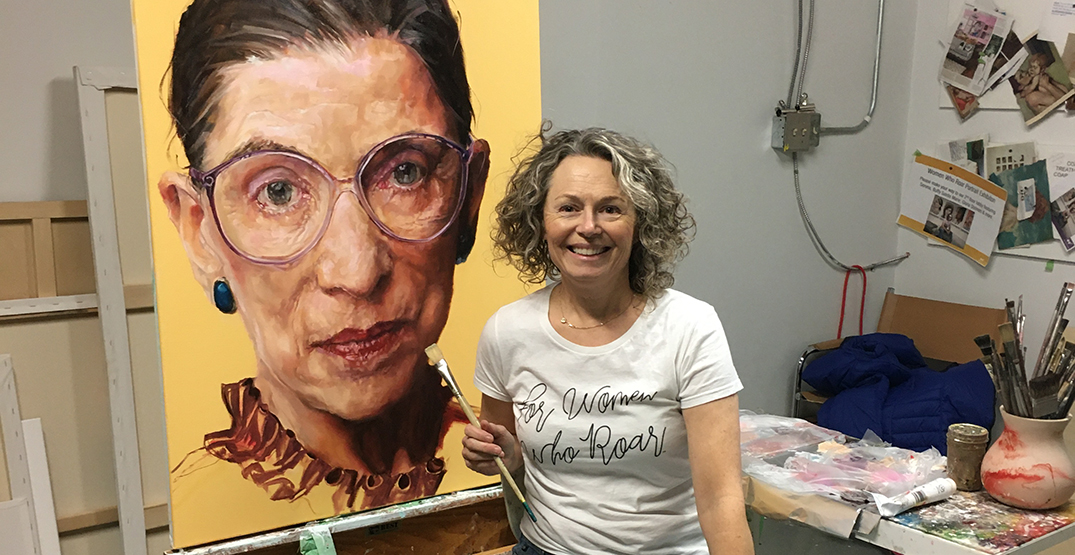 Artist Shana Wilson and her portrait of the late US Supreme Court Justice Ruth Bader Ginsburg that appeared on the cover of TIME Magazine. (Submitted)

A local Edmonton artist is the creator of a vibrant Ruth Bader Ginsburg portrait that’s being widely circulated after the revered judge’s death.

Shana Wilson’s painting was first published on the cover of TIME magazine in March 2020 as one of ten covers in circulation that month commemorating the magazine’s 100 Women of the Year.

It was the magazine’s effort to recognize the women it may have overlooked while publishing its annual Man of the Year issue until the name was changed to Person of the Year in 1999.

Oh Ruth. Long may your commitment to equality and justice live in those that come after you. The world needs more Ruth. Painting you was an honour. ⠀⠀⠀⠀⠀⠀⠀⠀⠀ ⠀⠀⠀⠀⠀⠀⠀⠀⠀ #ruthbaderginsburg #notoriousrbg #rbg #timecover #time100 #time100womenoftheyear #womenoftheyear #restinpower #supremecourt

Wilson recalled sitting in her Edmonton studio on a cold January day when she checked her email to find a note from TIME’s creative director asking to commission a painting. When Wilson found out she’d be doing Bader Ginsburg, she was “in shock” and “humbled.”

“Everything that Ruth stands for is something I’ve been preaching for a long time to my kids, to my friends,” Wilson said. “I wouldn’t be doing what I’m doing without the work she did.”

Wilson decided not to paint Bader Ginsburg in her judicial robes, instead opting for regular clothes to communicate that she was also a daughter, wife, mother, and grandmother. She wanted to capture the totality of who Bader Binsburg was.

“I wanted to choose something that portrayed her quiet, inner strength,” Wilson said. “She was so quiet yet so fierce.”

At the time, Wilson felt the judge was somewhat invincible. She was saddened to learn of Bader Ginsburg’s death last week, and was struck by the enormity of likely being the final person to capture her likeness on canvas.

“It feels crazy to know that in a really tiny way I’m part of this enormous legacy,” Wilson said.

Like many of its covers, TIME has made Shana’s painting available for purchase in poster form.

Painting inspirational women is something Wilson enjoys doing. She first caught TIME’s attention with her For Women Who Roar exhibit featuring images of trailblazers such as Christine Blasey Ford, Anita Hill,  Gloria Steinem, and Buffy Sainte-Marie.

The artist says her overall goal is to “empower women on canvas.”

She wants to see change in the art world, pointing to renowned museums such as the Louvre with many historic paintings that feature women in nude and subservient positions while men are “knights in shining armour quite literally,” she said.

She wants young girls and young boys who go on school trips to their local art galleries to “come out feeling empowered,” seeing a variety of roles for themselves.

“I understand history is history … but when it’s wrong, it’s also time to make amends.”

For those who want to see more of Wilson’s work, some of her paintings are on display at the Peter Robertson Gallery in Edmonton, including her original Bader Ginsburg canvas.