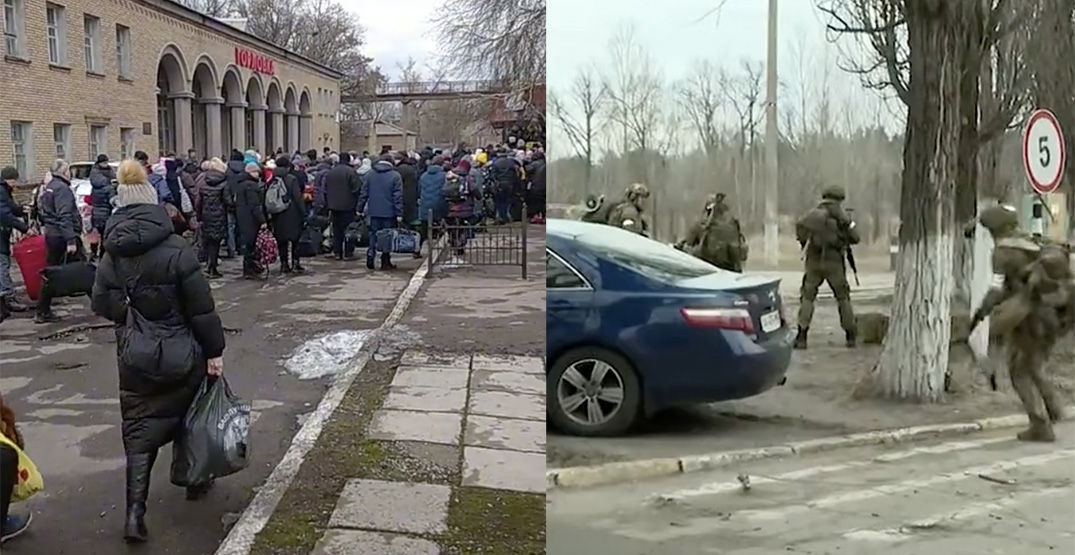 Years of political tension between bordering countries Russia and Ukraine have culminated in a full-scale invasion by Russia.

“Russia treacherously attacked our state in the morning, as Nazi Germany did in #2WW years,” he said. “As of today, our countries are on different sides of world history.”

Russia treacherously attacked our state in the morning, as Nazi Germany did in #2WW years. As of today, our countries are on different sides of world history. 🇷🇺 has embarked on a path of evil, but 🇺🇦 is defending itself & won’t give up its freedom no matter what Moscow thinks.

Caught in the middle are Ukrainian civilians who are trying to evacuate and take shelter from Russian missiles that are raining down on cities.

Salwan Georges, a photojournalist for The Washington Post, shared footage of hundreds of people taking shelter inside a subway station in Kharkiv, a city in northeast Ukraine.

“Explosions are heard in the city,” he tweeted.

Hundreds of people, including many women and children are currently taking shelter inside a subway station in Kharkiv, #Ukraine as explosions are heard in the city. @washingtonpost pic.twitter.com/ZddeHqlMvU

CNN reporter Clarissa Ward spoke with some of the civilians taking shelter in the subway station amid explosions.

CNN’s Matthew Chance reports from an airbase outside the Ukrainian capital of Kyiv, where Russian airborne troops are engaged in a fire fight with the Ukrainian military https://t.co/TaPomIUP26 pic.twitter.com/rSye7nzmbi

On TikTok, videos of an account that appears to show civilians in Ukraine evacuating have gone viral.

One video that has about six million views as of Thursday shows a large crowd of people with suitcases and bags. It was posted five days ago.

NBC News posted a video of the air raid sirens blaring through Kyiv.

Vice World News was also on the ground, interviewing evacuees in Kyiv.

“It’s a big threat for our lives…I have a fear, I have instinct, and I want to live, so I need to leave,” said one civilian as air raid sirens blare in the background.

@viceworldnews @matthewcassel spoke to people in Kyiv as they attempted to leave the Ukrainian capital, which is home to around 3 million people. #Russia #Ukraine ♬ original sound – VICE World News