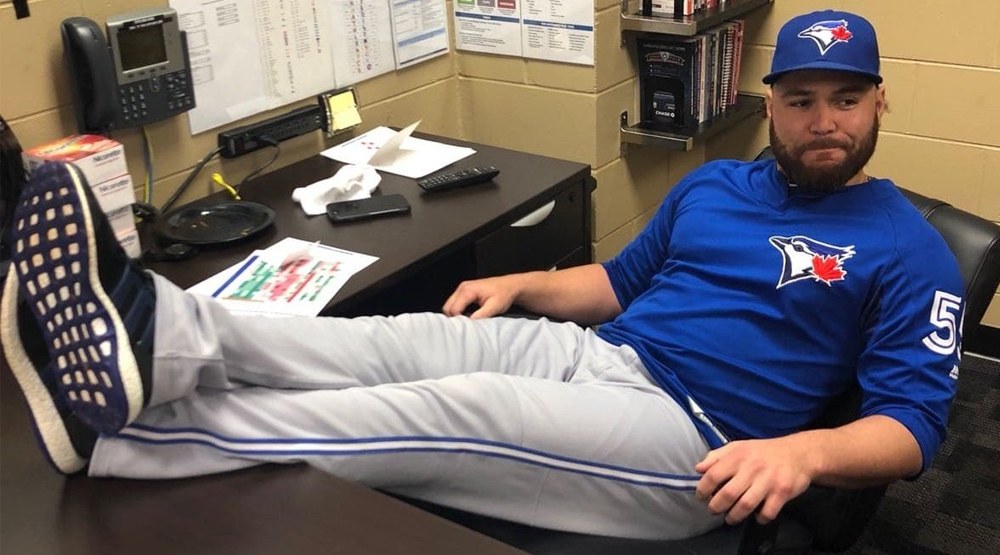 Russell Martin spent most of 2018 bouncing around the diamond for the Toronto Blue Jays. In total, he played 71 games at catcher, 21 games at third base, three games at shortstop and even one game in left field, of all places.

So, why not manager too?

In the Blue Jays’ final game of the 2018 regular season, John Gibbons handed the reigns over to the 13-year veteran as he played acting manager for a day. With Gibby nowhere to be seen, Martin put on the manager’s cap and pulled the strings from the dugout for the Blue Jays.

That included meeting with the media for the typical pre-game scrum to answer questions from writers and reporters. Martin absolutely nailed the Gibbons 135 degree lean backwards in the manager’s chair.

The Blue Jays’ backstop hasn’t seen game action since September 3rd, but noted he would only enter the game unless it was absolutely necessary.

Russell Martin is prepared for a playing-managing situation this afternoon. pic.twitter.com/kUSsu0Tbzi

Martin even made the customary pre-game trip out to home plate to exchange the lineups with the umpires and shake hands with his opponents.

Catcher, third base, shortstop, left fielder AND manager. @russellmartin55 has checked in for duty. 📝 pic.twitter.com/izcrI3zGaj

The skipper went out to retrieve his starter Sam Gaviglio after five and two-thirds innings. Martin’s speed to the mound was about 20 km/h faster than Gibbons’ typical saunter up the dugout steps and leisurely stroll out to the mound.

My favourite thing about Martin's first pitching change today – the infielders smirking and looking around at each other like "is this actually happening?" pic.twitter.com/OY3wz7hHSk

One of the downsides of being player-manager for a day? Your teammates may not take you seriously when you try to take them out of the game, as evidenced by this exchange between Gaviglio and Martin.

Manager-of-the-day Russell Martin said he went to over to shake starter Sam Gaviglio's hand in the dug out after the fifth inning, meaning his day was over, but Gaviglio would have it, and went out for the sixth #BlueJays

And then Martin wrapped up his day and the Blue Jays’ regular season by meeting with reporters one last time and dissecting the team’s 9-4 loss to the Tampa Bay Rays.

Russell Martin reflected on his experience managing the #BlueJays in the team’s season finale. pic.twitter.com/EOcaaDcSOP

“It was fun. I didn’t realize how much went into it. How much preparation, how much you have to think ahead. It’s tougher than it looks,” Martin told reporters.

With one year remaining on his five-year contract with the Blue Jays, Martin will make $20 million in 2019. The 35-year-old’s future with the Blue Jays remains uncertain as Danny Jansen took charge as the team’s everyday catcher in the month of September.

That means Martin’s final game in a Blue Jays uniform may have come as the team’s manager. If that’s how his era ends with the club – as player-manager for a day – that’s one of the more memorable ways to wrap up a Blue Jays career … arched back in the skipper’s chair without a care in the world, just as Gibbons would’ve done.