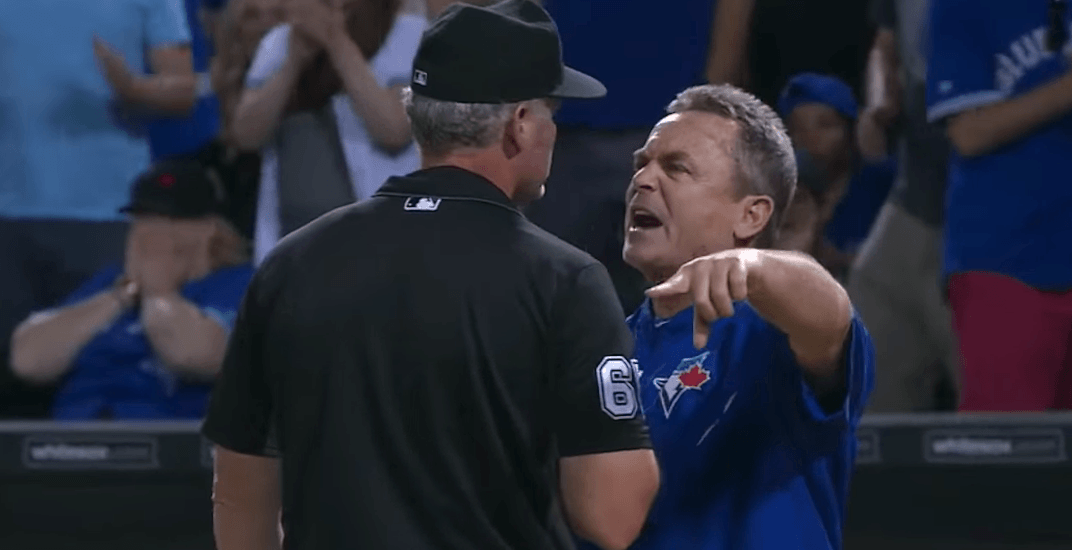 Blue Jays manager John Gibbons will be remembered for many things; his self-deprecating sense of humour, his affinity for country music and his maniacal cackle. But one of his most memorable traits was his ability to get ejected from a baseball game in an entertaining fashion.

With 52 career ejections to his name, Gibby ranks 14th all-time among managers in Major League Baseball. It’s an impressive feat for a man who will have managed 1,582 career games with an ejection rate of one toss per 30 games.

Some blow-ups were bigger than others. On some occasions, Gibbons was flat-out confused at what transpired.

With the news that he won’t be back next season as Blue Jays manager, here are the top-5 Gibby ejections.

This might be the most livid you’ll ever see Gibbons on the field. Here, he was enraged by a botched call at first base when the umpires declared Edwin Encarnacion bobbled the ball.

Upon further review, he didn’t, but with MLB’s instant replay system not yet instituted, all Gibby could do was yell and scream ’till he was blue in the face.

4. He gets ejected and makes the pitching change anyway (2017)

Gibby gets tossed – then makes the pitching change anyway. pic.twitter.com/xNoLPrGZBw

Technically, this might not even be allowed, but Gibbons pulled it off anyway. In the midst of walking out to the mound, he gets ejected by Lance Barksdale for arguing balls and strikes.

The genius thing about this move? Gibby keeps sauntering to the mound and makes the pitching change, even though he was just ejected from the game. You won’t see a better pitching change than this.

The summer of 2015 was one of the most exciting eras in recent memory for the Blue Jays. The team was riding high, having completed a whirlwind trade deadline and finished with a 40-18 record during the final two months of the regular season.

The team’s four-game set against their eventual ALCS opponent – the Kansas City Royals – would prove to be one of the most heated series of the 2015 season.

After the Royals and Blue Jays traded several bean balls back-and-forth, Gibbons had finally seen enough after his MVP third baseman Josh Donaldson was buzzed up and in.

Here's some audio from the John Gibbons ejection.

Navigating a relationship with an umpire is a delicate dance. Sometimes, managers say “screw it” and flat-out berate the guys behind the plate. Here, Gibbons antagonizes home plate umpire Will Little by saying “flip a coin” before getting ejected.

That’s when Gibby really goes to town and you can hear a few choice words from the Blue Jays manager before the mics get cut off.

This is without question the biggest blow-up by Gibby after an ejection. He absolutely lost it on the umpiring crew during this game on June 24, 2016. In what was clearly a foul tip, Darwin Barney was ruled out at first base on a swinging third strike.

Gibbons couldn’t believe what happened and rightfully tore a strip off the home plate umpire and third base ump before exiting the field… and picking up his cap that he spiked into the ground in disgust.