With just three games remaining in the regular season, the Canucks are sitting in a good spot, 2 points ahead of the Calgary Flames for second in the Pacific Division.

In the wild and wacky NHL, nothing is solidified. The Canucks could have home ice advantage, finish as a wild card team or even miss the playoffs entirely.

So what’s it going to take? Let’s find out in another edition of Rumours & Revelations.

The Canucks have two very winnable games left against Arizona and Edmonton (although Vancouver is 2-1-1 against the Coyotes this season), but beating Los Angeles is of vital importance tonight. Beating the Kings would not only help the Canucks secure home ice advantage in the first round, it would also help avoid a first round matchup against the defending Stanley Cup champs. 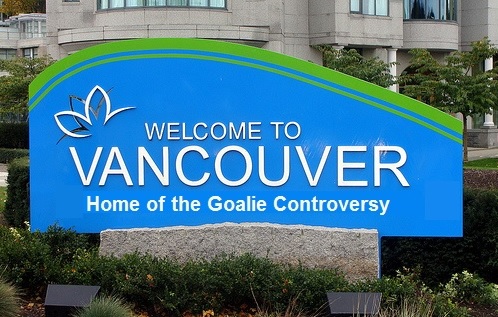 Since Ryan Miller went down with a serious knee injury against the New York Islanders six weeks ago, Eddie Lack done a good job backstopping the Canucks. Lack has a .917 SV% on the season, which ranks him 15th in the league. His save percentage since taking over from Ryan Miller has been a sparkling .921. But his save percentage in the last 10 games has been a pedestrian .911.

So depending on what your preconceived notions are for Lack, you can see him as average, elite or sub-par. And that’s a perfect recipe for a fan-fueled goaltending controversy, which boiled over with Canucks nation on Twitter after Sunday’s game against Winnipeg.

This game is over without Lack

From my standpoint, Lack has been more far more good than bad since Miller went down with an injury and he’s making me a believer. He’s not an elite goalie in the league (at least not yet), but he is very good.

Lack’s elite-level save percentage since Miller went down with an injury should not be overlooked, although I question whether he will be able to sustain a .920 SV%. He will have some ups and downs, but he has been Vancouver’s best netminder this season.

The question that is looming for Vancouver is what they will do with Ryan Miller. He began practicing with the team on Friday and could potentially be ready for game action by the end of the week.

If Vancouver has a playoff spot secured, it makes sense to give him a game against the Oilers in the season finale. But if the season is on the line, I don’t see any way that the Canucks can lean on a goalie that hasn’t played a game in nearly two months.

That brings us to the playoffs. If the Canucks make it and Miller is healthy, who will Willie Desjardins start? Conventional wisdom says you start the #1 veteran goalie with the big contract. There is also an unwritten rule in hockey that you don’t lose your job due to injury.

Although one would hope the Tom Brady-Drew Bledsoe example from football would put an end to that unwritten rule.

Personally, I would go with the hot hand, Eddie Lack. Willie Desjardins might agree and start Lack, but then the question will become: how long is Eddie’s leash?

Welcome to Vancouver, home of the… It never ends.

The Canucks will hand out their end-of-season awards this week and one of the most intriguing selections every year is the unsung hero. There are no shortage of candidates this season and with all the Twitter-hate I see about him, I’m tempted to give the unsung hero to Ryan Miller. But that would be just weird and awkward for everyone involved…

So instead, my choice for the unsung hero this season is defenceman Yannick Weber.

Weber is a guy who rarely gets talked about. He came into this season as a depth defenceman. He was on waivers at one point last year and played 7 games for the Utica Comets.

This season, Weber began in a mix of depth d-men that included Ryan Stanton, Luca Sbisa and Frank Corrado. But Weber has separated himself from the herd and is now a minute-eating defenceman on Vancouver’s second pairing with Dan Hamhuis. In the last 5 games, Weber has averaged over 20 minutes of ice time.

Weber leads all Canucks defencemen in goals this year, with 9. Recently promoted to the first unit power play, his big shot and puck moving ability has been one of the biggest reasons for the Canucks’ dramatic improvement with the man advantage.

Maybe Sven Baertschi felt he couldn’t follow in the footsteps of the living legend, Kyle Wellwood.

Baertschi said he's happy with the switch to No. 47. Was his number in Calgary; calls it his "lucky number." #Canucks

Or maybe he got wise to the curse that has bestowed the Canucks jersey #42. Previous wearers of that jersey include Josef Beranek, Kyle Wellwood, Bill Sweatt and Benn Ferriero. That’s not exactly the company you want to keep.

Thankfully after just one game wearing #42, he has switched to jersey #47, once worn by the great Yann Sauve… Aww crap. I guess there are a lot of cursed jersey numbers in this franchise.