As the Canucks continue to beat the likes of Anaheim and St Louis, while losing to the likes of Buffalo and Arizona, now seems as good as any time to dip into some rumours and revelations. 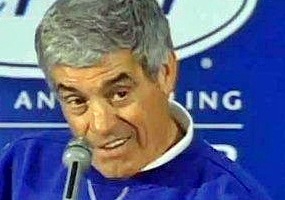 The Canucks are 2nd in the Pacific Division, which would ensure home ice in the first round of the playoffs, but they have just a 3 point cushion on their playoff spot. The defending champion Los Angeles Kings are one of the teams on the outside looking in at the moment, and that should scare you.

If the Canucks modestly earn half of the remaining points left in their final 16 games, they will finish the season with 96 points, essentially guaranteeing a playoff spot. Vancouver’s remaining schedule includes games against 8 non-playoff teams (not counting the Kings), Los Angeles three times, Winnipeg twice, St Louis, Nashville and Chicago.

Bieksa Back on Saturday?

The most amazing part about the Canucks’ performance over the past month has been the fact that they have won games despite missing three of their top-4 defencemen. Alex Edler and Chris Tanev have returned to the lineup, and Kevin Bieksa looks like he may return to play on Saturday against the Toronto Maple Leafs.

Botch says Bieksa's hoping to come back Saturday. Richardson could be back Thursday. #Canucks

I bet Don Cherry will be happy to see his boy ‘Bieska’ back in the lineup against his Leafs.

YKNOW LOOK HERE AT THE SUNDINS THERE SLASHIN AND HACKIN AND HE NEEDS TA BE SAVED BY MY BUDDY BIESKA FROM GRIMSBY ONTARIO ATTAGO BIESKA!!!

Jensen on the block?

I think it is pretty telling that Jensen hasn’t been given much of an opportunity this season, despite showing flashes last year. Jensen has just 22 points in 44 games in Utica this season and has just 51 points in 124 career AHL games. Those aren’t numbers that scream future top-6 forward.

The 22-year-old needs to give the Canucks a reason to keep him, particularly with the likes of Bo Horvat, Sven Baertschi and Jake Virtanen set to pass him on the depth chart. Is there room for Jensen? He may be someone that GM Jim Benning uses to recoup some draft picks that he lost in other trades.

Eddie Lack has always been the goalie with most potential (given his age) but also with the most uncertainty (given his lack of experience). Lack played well in spot duty as Miller’s backup this season, but proving that he can perform as the starter is a different animal.

He didn’t respond to it well last season, albeit in difficult circumstances. This year has been a different story.

Desjardins says Miller is still "a ways away." probably still 2-3 weeks out. #Canucks

What on earth are the Canucks going to do if Eddie Lack continues this level of play for the next 2-3 weeks? If Lack keeps this up, he will be playing at a level that we couldn’t expect from Miller, especially coming back from an injury.

It doesn’t roll off the tongue as well as ‘perimeter pass Kass’, as I dubbed Kassian earlier this season, but it is wonderful to see Kassian finally playing like the player we have been waiting for.

Playing on a line with the Sedins, Kassian looks like a power forward. And that’s significant, because it wasn’t that long ago that people were beginning to say that being a power forward isn’t his game.

If management envisions Kassian filling a "power forward" role theyl always be disappointed. Thats just not his game. Might as well move him

And how can we blame people for thinking this? Kassian wasn’t a force physically. He wasn’t scoring. He wasn’t noticeable.

There’s no way of knowing if all of the healthy scratches and tough love got his attention, or if this is simply a function of being put into a top-6 role, but Kassian performing like a true power forward with the Sedins is a game changer.

All of a sudden, the Canucks have discovered a brand new top-6 forward. They also have another look to give teams on their top line.

For years, the Canucks have been susceptible to teams shutting down the Sedin line. Shutdown the Sedins, and you are likely to win the game. And when you constantly roll out Alex Burrows as their winger, you make pre-scouting very easy for your opponents.

Now, with Zack Kassian, Radim Vrbata and Alex Burrows as legitimate options to play with Henrik and Daniel Sedin, the Canucks have three very different looks to throw at teams. Different situations and matchups will call for the size and strength of Kassian, the tenaciousness and defensive awareness of Burrows, or the goal scoring ability of Radim Vrbata.

And that bodes well for the playoffs… If they make it.