Still confused at what life looks like in a world where the Canucks get shelled by the Toronto Maple Leafs and are unable to hold a three goal lead against the no longer pesky Ottawa Senators? I’ll try to bring order back with another edition of Rumours and Revelations. 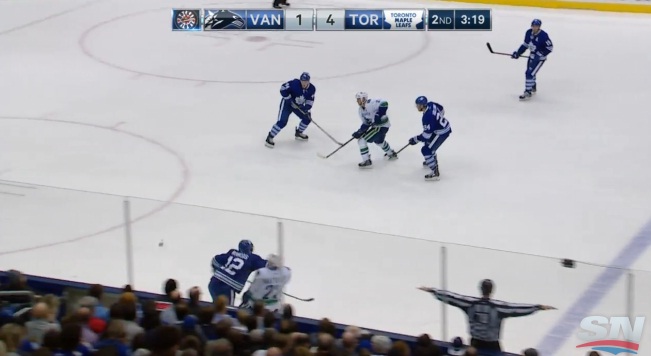 How on earth is Stephane Robidas not going to get suspended for his elbow to the head of Canucks forward Shawn Matthias on Saturday night? I still haven’t got a clue what is or isn’t a suspension in the NHL. Robidas, who is listed as 5’11”, clearly extends his arm to hit 6’4″ Shawn Matthias in the head. The hit caused a concussion and Matthias is gone from the Canucks lineup until who knows when.

Robidas said he didn’t mean to hurt Matthias, which somehow drew headlines on Sportsnet.ca and NHL.com. Have you ever heard a player say “yeah, I meant to hurt him and I’m glad he’s injured”?

I would love to know what a suspension is in the NHL. I thought causing a concussion from an elbow, from an extended arm to the head of a taller player, qualified for at least a game or two.

Dorsett went off on Neil too, called him classless, said raising his arms after fight was a "junior move". Will get full clip later.

Derek Dorsett isn’t particularly thrilled with Chris Neil and for good reason. Neil asked Dorsett to fight, Dorsett declined because he had a bad hand, but Neil persisted. Then, when they fought, Neil snuck-in a sucker punch or two after the linesmen were breaking things up. Then to add insult-to-injury, Neil waved his hands in the air to the crowd. That’s three things you ought to do as a fighter in the NHL.

Say what you want about fighting in hockey, but there is a code among fighters in the league and Neil was way out of line. I don’t blame him for being pissed.

Dorsett on Neil –
"I've talked to many guys around the league and they say he's stupid and just proves it tonight. Guy has been playing…

…in the league over 10 years, has well over a thousand penalty minutes and you'd think he'd have a little bit of class."

Pretty even fight and I fall down and he gets two punches in. The refs in there and it's just uncalled for.

Then he gives it the junior move and starts waving on their fans it's just Chris Neil in a nutshell. END sorry for the multiple tweets!

Usually a comeback win in overtime is a good team building moment that can help propel a team on to bigger and better things. Not so for former Sens coach Paul MacLean, who was fired today, despite beating the Canucks on Sunday. It’s pretty unusual to fire your coach after a win, but it’s also pretty unusual for a coach to throw both his players and his general manager under the bus in one comment:

It sort of reminded me of when Michel Therrien was losing it when he was coaching the Pens in 2006.

Careful when running your mouth on Twitter about Aaron Ward. Whether you want him to see it or not, he will, as our own Ryan Biech found out last week:

@ryanbiech Hilarious and original. You write for a living? Sorry

Oooh SNAP! Ryan didn’t even tag him in his tweet. Does he search his name for random stuff to get mad at?

Yes he does. Apparently he gets a kick out of it. Funny stuff.

Revenge of the Rob

It has been a good year for proponents of analytics in hockey. Last season, the most publicized team in the world, the Toronto Maple Leafs, had an epic collapse as predicted by the fancy stats community. The best Corsi team in the NHL, the LA Kings, won the Stanley Cup. In the offseason, analytics bloggers began to get snapped up by NHL teams all over the place in a nerds arms race.

Well I want an apology from the stats community for being wrong about the New Jersey Devils. The Devils finished the NHL with the 2nd best 5-on-5 Corsi-For percentage in 2012-13 and the 3rd best percentage in 2013-14. They missed the playoffs in both seasons. This year, with stronger goaltending, they have the 7th worst record in the NHL despite playing in the weakest division.

I am a believer in analytics as a valuable tool to help make sense of the sport of hockey, which has so many variables. Ironically, a team name the Devils are proving that fancy stats aren’t always gospel.

You would think after this many years of consistent production that two classy former MVPs (Henrik won the Hart in 2010, Daniel won the Pearson in 2011) wouldn’t still be underrated and under-appreciated.

In NHL fan All-Star voting, Henrik and Daniel rank 83rd and 88th respectively. All-Star voting has its share of flaws (Zemgus Girgensons is leading all vote-getters because of the Latvian vote) but usually established star players get a large share of the votes.

The Sedins somehow are still underrated outside of Vancouver and under-appreciated inside of Vancouver. Jerseys in Rogers Arena ought to be 70-80% with #22 or #33. Instead, there’s a whole lot of Alex Burrows, Kevin Bieksa and Radim Vrbata.

Go here to give the Sedins the respect they deserve: https://allstarvote.nhl.com/