It’s time for the second edition of Rumours, and Revelations! Yes, one week in and I’ve already changed the name. This is the regular series where I rant about a bunch of random things going on with the Canucks, the NHL, the media or anywhere else.

As my insider Taj so eloquently points out, it is believed that the Canucks may have had a deal in the works with the St Louis Blues for Patrik Berglund. I haven’t been able to find confirmation on this from anywhere on the internet, although Taj is typically very reliable at relaying information. Elliotte Friedman reported in June that the Canucks had interest in Berglund.

Gallagher believes Garrison refused to waive his no-trade clause to go to St Louis and then again to another team. He eventually got the hint that the Canucks didn’t want him anymore and accepted a trade to the Lightning.

What’s interesting is how things may have changed if the Garrison-Berglund deal was accepted. Linden Vey was acquired with the draft pick acquired from Tampa By, so he likely wouldn’t have become a Canuck. Perhaps the Canucks wouldn’t have insisted on a centre (Nick Bonino) in the Ryan Kesler trade? 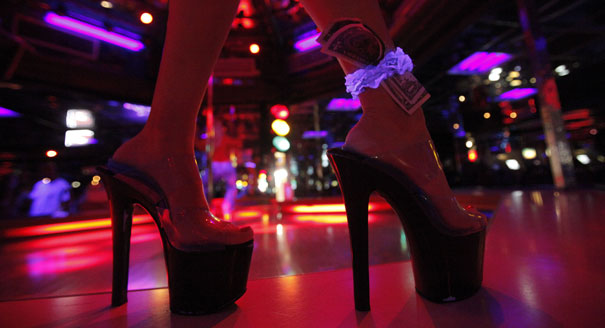 The Lightning had three days off before their game with the Canucks on Saturday and they arrived into town a few days early. That’s usually a recipe for the ‘Roxy flu‘, where visiting players party like rock stars the night before the game and are a little less than their best the next day. The Lightning didn’t have any trouble performing on Saturday and Tony Gallagher has a theory as to why. Gallagher actually said that the Lightning wouldn’t be impressed with the Roxy due to the fact that the gentlemen’s clubs in Tampa are the ‘best anywhere’.

The Canucks sellout streak officially ended on Saturday, with only about 200 empty seats in Rogers Arena for the game. What’s interesting about this is that it was announced by Canucks Sports and Entertainment the day before the game. I thought it was a very smart move for the team to get ahead of the story and celebrate the streak. They turned a negative into a positive.

The Canucks sent Bo Horvat to their farm team in Utica on Sunday. Due to his age, Horvat is not allowed to play a full season in the AHL (it’s NHL or junior hockey for him), but he is allowed to play for Utica for two weeks on a conditioning stint. The Canucks are loathed to send Horvat to junior, but he also might not be ready for regular NHL action either. They also might not be too enamored with burning the first year of his entry level contract, if he plays 10 games or more.

The plan with Horvat, as I see it, will be to play him in Utica for two weeks and get a look at how he performs with significant playing time. Then, Horvat will get essentially a 9-game tryout to prove his worth. If he isn’t going to be an every day player for the team, by that time it’ll be December and he can be loaned to Canada’s World Junior team. Then he can be sent back to the OHL, where he would only have to endure half a season of junior hockey. 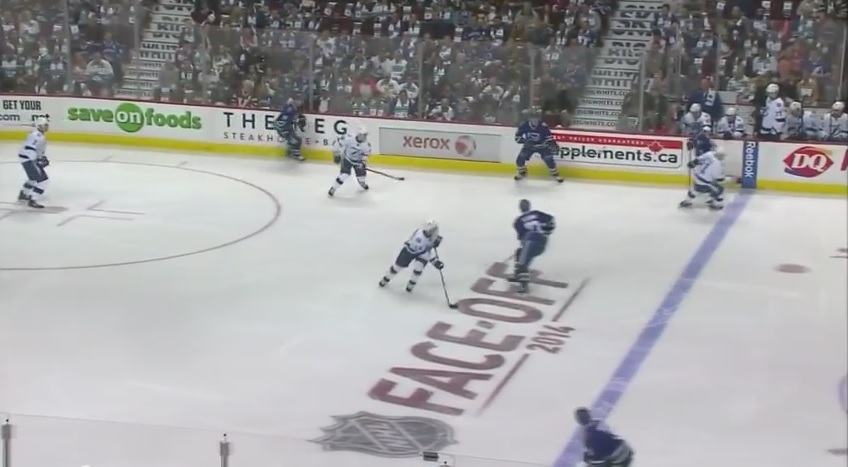 Bieksa had a nightmare of a game on Saturday. He was on the ice for 3 of the 4 Tampa Bay goals and took a penalty to put the Canucks down 5-on-3 for Tampa’s power play goal. What was particularly puzzling was his positioning on the first Tampa goal. The picture above shows Bieksa at the bottom of the screen, just before Henrik Sedin turned the puck over. Bieksa’s partner, Dan Hamhuis, had already pinched-in which means that Bieksa has to play more conservatively. Instead he makes a beeline for some open ice, in hopes of getting a pass from Henrik. The puck was turned over and Steve Stamkos had a breakaway. He should have been standing in the middle of the ice, between the blue line and the red line.

I think the Canucks would be well advised to focus Bieksa as a shutdown defenceman, playing with Dan Hamhuis, like he was in 2011. If he is going to be playing against top players like Stamkos, he needs to be focused on preventing goals more than scoring them.

Get Edler on PP1

The Canucks are inexplicably playing Kevin Bieksa and/or Chris Tanev on the team’s top power play unit. They’re doing this presumably because they want a right-shot defenceman in that spot but I really think this needs to be Alex Edler’s domain. The only Canucks defenceman with the potential to be very good in that spot is Edler.

After some encouragement from some people on Twitter, I have decided to use this space to regularly reminisce about some cool experiences I had when I worked for the Vancouver Canucks in 2006-07. I interned with the team in the community department for four months while I was in university. For a lifelong Canucks fan, it was like going to fantasy camp. I would have paid them for the experience (luckily they paid me instead).

My stories are mostly short and usually completely random. I hope you find them interesting.

I was just around the corner when these photos were taken. The Canucks visited BC Children’s Hospital in December of 2006, as they do every year. I was asked if I wanted to help at the last minute but I had an important school project that was due the next day. I was planning on spending significant time on it that evening and I considered skipping the hospital visit for about a minute before I thought “when will you ever get to do this again???”. I did ok on the project, if you’re wondering.

I was assigned to a group that consisted of the Sedins, Alex Edler, Jan Bulis and Tommi Santala. Bulis was something of a whipping boy for fans at this point (it was his final season in the NHL, he finished with only 12 goals) and he appeared to be very aware of that fact. The players were talking about who was tougher and I overheard one of the Sedins (I think it was Henrik, but I couldn’t tell them apart in those days) say “oh, YOU don’t want to make me mad”.

The players delivered children’s books and signed hockey cards as they went from room to room. Alex Edler, who was a rookie call-up, didn’t have his own card to sign yet, so he had to sign a generic card with a Canucks logo (orca) on it. The other players snickered at him and called him ‘Fin’.

Hey, I told you it was going to be random.