Welcome to another edition of Rumours and Revelations, the article where I rant about a bunch of random things going on with the Canucks, the NHL, the media or anywhere else.

Look, Nick Bonino will likely never be as good of an all-around player as Ryan Kesler, but it does bring a smile to my face seeing them both tied in points this early in the season. Kesler has 7 points in 9 games, while Bonino has 7 points in 8 games. So with the same amount of points in one less game, we can say that Nick Bonino is actually outscoring Ryan Kesler.

Yayaya, Kesler is great on the PK and all that, but Bonino has equaled his point total without the benefit of playing on the PP with Getzlaf and Perry and that’s impressive. They’re not equals, but if Bonino can match Kesler’s offensive production this season it will silence a lot of the doubters that didn’t think Bonino could be a legitimate second line centre.

Plus, Bonino’s name is a lot more fun to say.

Call me crazy, but it might be worth trading Eddie Lack. Sure, nobody wants to see the lovable guy go, but with Ryan Miller getting the bulk of the load it’s unlikely that Lack will get the opportunity to ever become a starting goalie in Vancouver anyway. Jacob Markstrom is two years younger than Lack and is currently ripping up the AHL. He is 4-0 with a .991 SV% and 3 shutouts. Those aren’t just good numbers, they’re spectacular.

@DJSkead If they could get a C they'd move lack, but I don't think there's much chance of that

So the question becomes what would it take for Vancouver to give up Lack? Botch asserts that a centre would do the trick, likely a third line centre with skill and youth in my opinion. I also think that a top 5 defenceman on the right side of age 30 would be enough to get it done as well. That’s not likely to happen given the oversaturated goalie market and Lack sitting on the bench, but you never know.

The Canucks are handling 21-year-old defenceman Frank Corrado in a bizarre fashion. Corrado was called up from Utica following Ryan Stanton’s injury on October 18. Since then he has sat in the press box for five games and may not draw into an NHL game at all before Ryan Stanton returns from injury (Stanton began skating on Monday). If the plan was to play Sbisa and Weber come hell or high water, then Corrado should have stayed put in Utica. Instead, Corrado looks like he is going to get a two week break when he should be finding his rhythm.

This is what Sportsnet looks like less than two minutes after the final buzzer of Canucks games on their Sportsnet Vancouver channel:

It’s bad enough that Sportsnet no longer has a strong Vancouver presence (bring back Don Taylor please), but give us something. An interview, some highlights, I’ll even settle for some Toronto-centric analysis at this point. Going immediately to a blank screen is bush league.

Nobody seemed overly bored by my story last week, so Rob’s stories is here to stay! To get you caught up, I interned with the Canucks in the community department for four months while I was in university. For a lifelong Canucks fan, it was like going to fantasy camp. I would have paid them for the experience (luckily they paid me instead).

The Canucks were playing the defending Stanley Cup champion Carolina Hurricanes at GM Place on December 8, 2006. My job that night was to coordinate the little kids that play during the first intermission (minor hockey is still the best intermission entertainment around). Once I got the kids off the ice and into their seats, it was time to take my seat in the press box.

There was one open seat left in the press box, right next to Taylor Pyatt, who was sitting out with a shoulder injury. 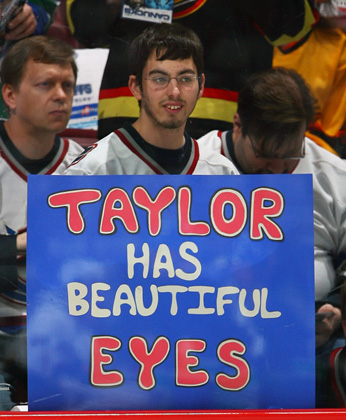 As the second period rolled on, I began to think that I should come up with something to say. Pyatt, despite his beautiful eyes, isn’t exactly a real chatterbox. It was going to be up to me to open the conversation. At 17:41 of the second period, much maligned free agent signing centre Marc Chouinard scored his first goal of the season and gave a playoff-style fist pump, clearly relieved to have potted his first as a Canuck.

The conversation that ensued is the stuff of legend:

Told you he wasn’t a chatterbox.

The Canucks were actually up 3-0 in that game with goals from Jan Bulis, Marc Chouinard and Yannick Tremblay (that’s two weeks in a row that I’ve mentioned Jan Bulis in this space, you’re welcome Harrison Mooney and Daniel Wagner), only to blow the lead in the third period. Daniel Sedin saved the day in overtime, scoring on the power play.

Fun fact: Tremblay, in his first game as a Canuck, finished the game with three points. Those were the last three points of his career.