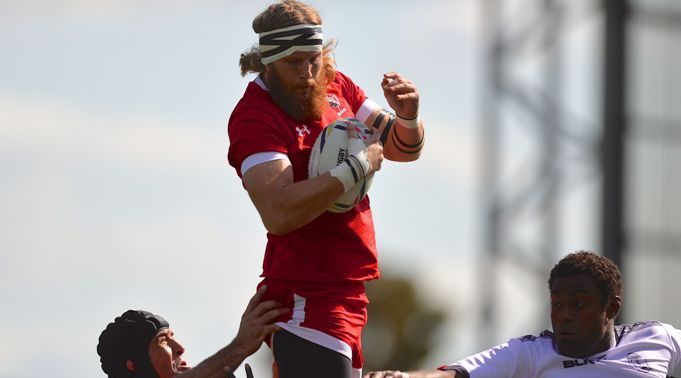 On Saturday afternoon when Canada takes to the pitch to face Japan in an eagerly anticipated test match at BC Place in Vancouver, Mark Anscombe’s squad will feature two players that have a unique relationship that goes back well over a decade.

More than twenty years ago Evan Olmstead’s father was eager to take on a new challenge in life. When an old friend from West Vancouver’s Capilano RFC contacted Olmstead’s dad about getting a new startup company off the ground he accepted and moved the family twelve-and-half thousand kilometers from North Vancouver to Sydney, Australia.

“It was just supposed to be a two-year thing to help them get started and then move back to Canada,” said Olmstead. “That didn’t end up happening, and we ended up staying put.”

The Olmsteads settled into their new life and home on the other side of the world. At school Evan played both soccer and basketball for several years, and eventually discovered rugby.

A significant moment in Olmstead’s life came during the 2003 during the Rugby World Cup in Australia. The Canadian team was based in the city of Wollongong, a city in New South Wales approximately an hour and a half south of Sydney. In addition to watching several of Canada’s World Cup matches, a family friend with ties to both Rugby Canada and Capilano RFC arranged for the Olmsteads to meet the team. It was at the team’s hotel in Wollongong that Evan met a young Jamie Cudmore for the very first time.

“Jamie was there and he took us to the hotel and introduced us to the team,” said Olmstead. “We had a Canadian jersey that was signed by all the guys, and obviously we took a couple of pictures. Some of the pictures have become more famous than some of the other ones.”

One of the pictures taken at the time included a group photo with Cudmore, who at the age of 23, was in Rugby Canada’s World Cup team for the very first time. 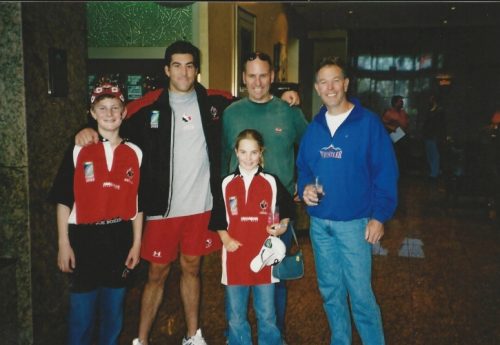 “Yeah, I know the picture,” said Cudmore. “We brought it out at the World Cup last year, and Evan got quite a ribbing for that one.”

The experience made a big impression on Olmstead, who was only 12 years-old at the time.

“I did the math, and thought that if he’s still playing when he’s 36, and I make it when I’m 24 then we could be on the same team one day, and that would be pretty cool,” said Olmstead.

Olmstead’s wish to play with Cudmore finally came true in a friendly match against the Glasgow Warriors one afternoon in Halifax, Nova Scotia during the summer of 2015. Canada’s former head coach Kieran Crowley fielded a strong side for the match, which included Cudmore and Olmstead as the starting second row combination. The pair went on to figure prominently in the match with Cudmore scoring a try en route to a 19-12 victory over the Warriors.

The pair of Cudmore and Olmstead were both in Crowley’s squad for last year’s World Cup. It was a disappointing tournament for Canada, who failed to win a single match, and finished dead last in their pool. Despite the setbacks suffered at the World Cup last year Cudmore is optimistic about the future of the senior men’s rugby program.

“It’s an exciting time for Rugby Canada. We have a really good young group coming through with a new coaching staff,” said Cudmore. “Obviously with last year’s World Cup we’ve still got a bit of a bad taste in our mouth after not winning any games, and especially losing a very close one to Italy.”

In addition to the new players and coaches, Cudmore is looking forward to the upcoming series of test matches to be played on Canadian soil. The veteran lock is eager for the rematch against Italy at BMO Field in Toronto on June 26th, but realizes there is a lot of work to do against Japan and Russia in the meantime.

“I think it would be short-sighted to look past Japan, who had an amazing World Cup, knocking off South Africa, winning three games in their pool, and still not getting to the quarter-finals,” said Cudmore. “The Russians are a program very much in their infancy, but I think just like the Americans that once they start getting their heads around rugby they’ll be very strong.”

Both Cudmore and Olmstead echoed the sentiment that the series of upcoming test matches are an important time for Rugby Canada’s senior men’s program.

“The Rugby World Cup is the third biggest sporting event in the world after the Olympics and the soccer World Cup. It’s obviously a huge sport globally, and it’s growing in Canada,” explained Olmstead. “These matches in particular are really important for us, and people should get excited because it will really give us an opportunity to lift our world ranking.”

The 2016 Rise As One Summer Series gets underway this Saturday afternoon at 3:00pm PT when Canada play Japan at BC Place stadium in Vancouver.