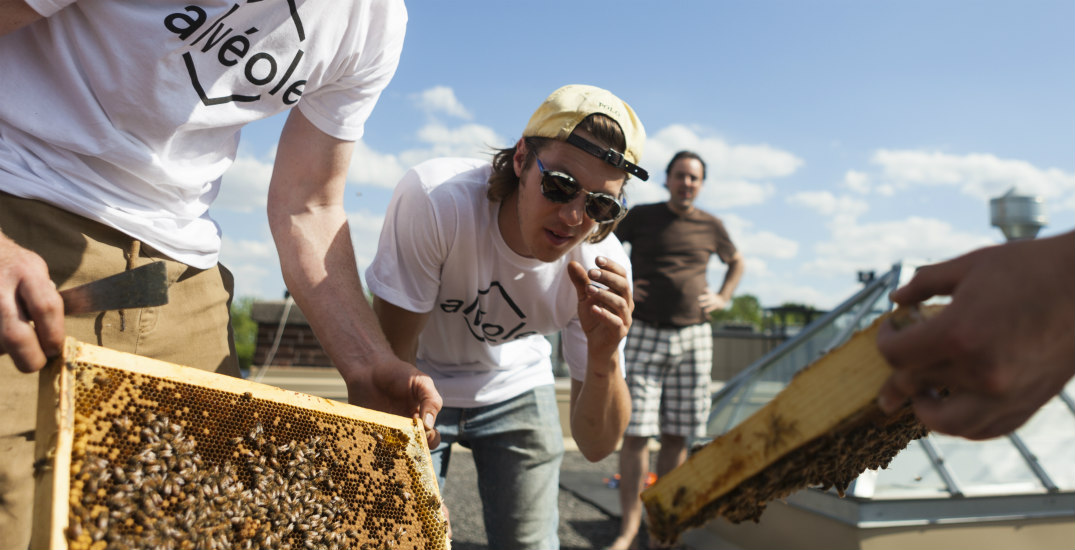 Vancouver is one of the most beautiful cities in the country, and biodiversity plays a huge role in this. Maintaining our awe-inspiring ecosystem takes a lot more than just soil, water, and sunshine.

Almost 90% of all flowering plants require pollinators, which is why bees are vital for ecosystem stability. And the team at West Georgia Street’s Royal Centre is hyperaware of the role that bees play in our environment and the world.

“With the effects of climate change becoming more and more prominent every year, causing flowers to bloom earlier or later than usual, bees are being left with fewer food sources at the start of the season,” explains David Basford, Property Manager at Royal Centre.

Bees suffer habitat loss from development, abandoned farms, and the lack of bee-friendly flowers. Basford says colony collapse is particularly troublesome within city limits due to plants and seeds being treated with neonicotinoid pesticides.

To help support our ecosystem, Royal Centre teamed up with Jessie Collison, an urban beekeeper at Alvéole, to install two beehives at their iconic building located at the corner of Burrard and West Georgia Street in the heart of downtown Vancouver. 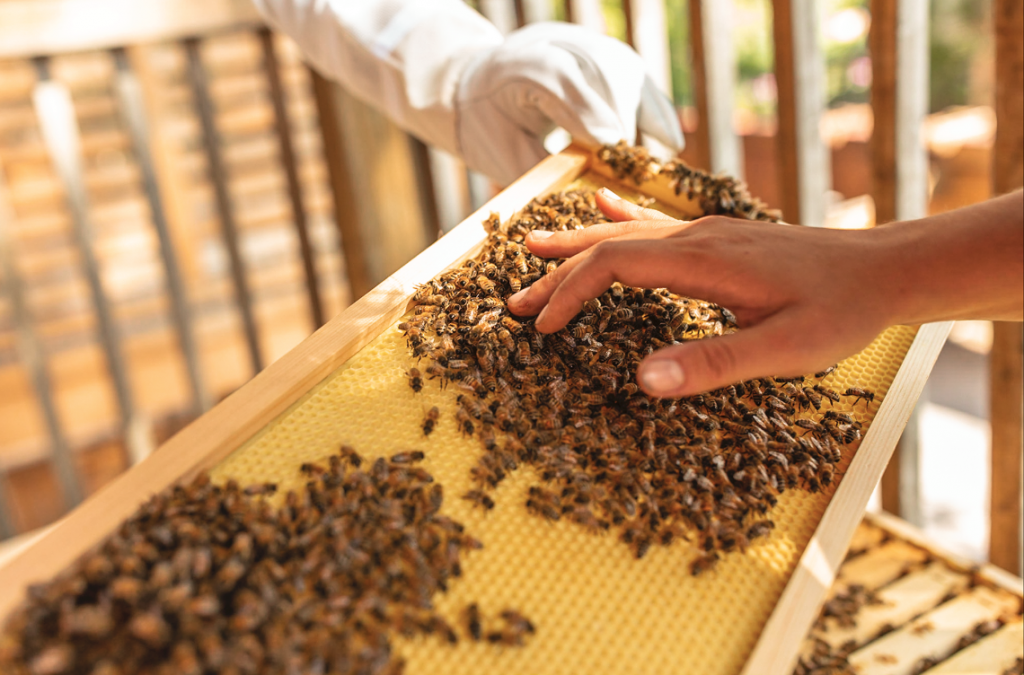 “Our installs start with a really early morning, before sunrise,” says Collison. “The reason we choose such an early morning is that it ensures all of the colonies are inside their hives and aren’t out foraging.”

Collison’s team keeps their hives in bee yards; as they prepare the hives to be moved, they seal up the entrances, keeping the inhabitants safe and secure. “When we move the hives to a new location, we want to make sure that we have all members of the colony within them.”

The hives are then transported to their new home — in this case, Royal Centre, located in the heart of downtown Vancouver. “With any location, navigating around an urban setting can get a little complicated. You have difficulties with troubleshooting how you’re going to get the colony to the roof, and where the best orientation will be for the hive,” says Collison.

Her team often climbs a lot of stairs (and sometimes even employs ship ladders), or they implement a rope system to bring the hive up. When the hives safely reach the rooftop, they are secured in place. 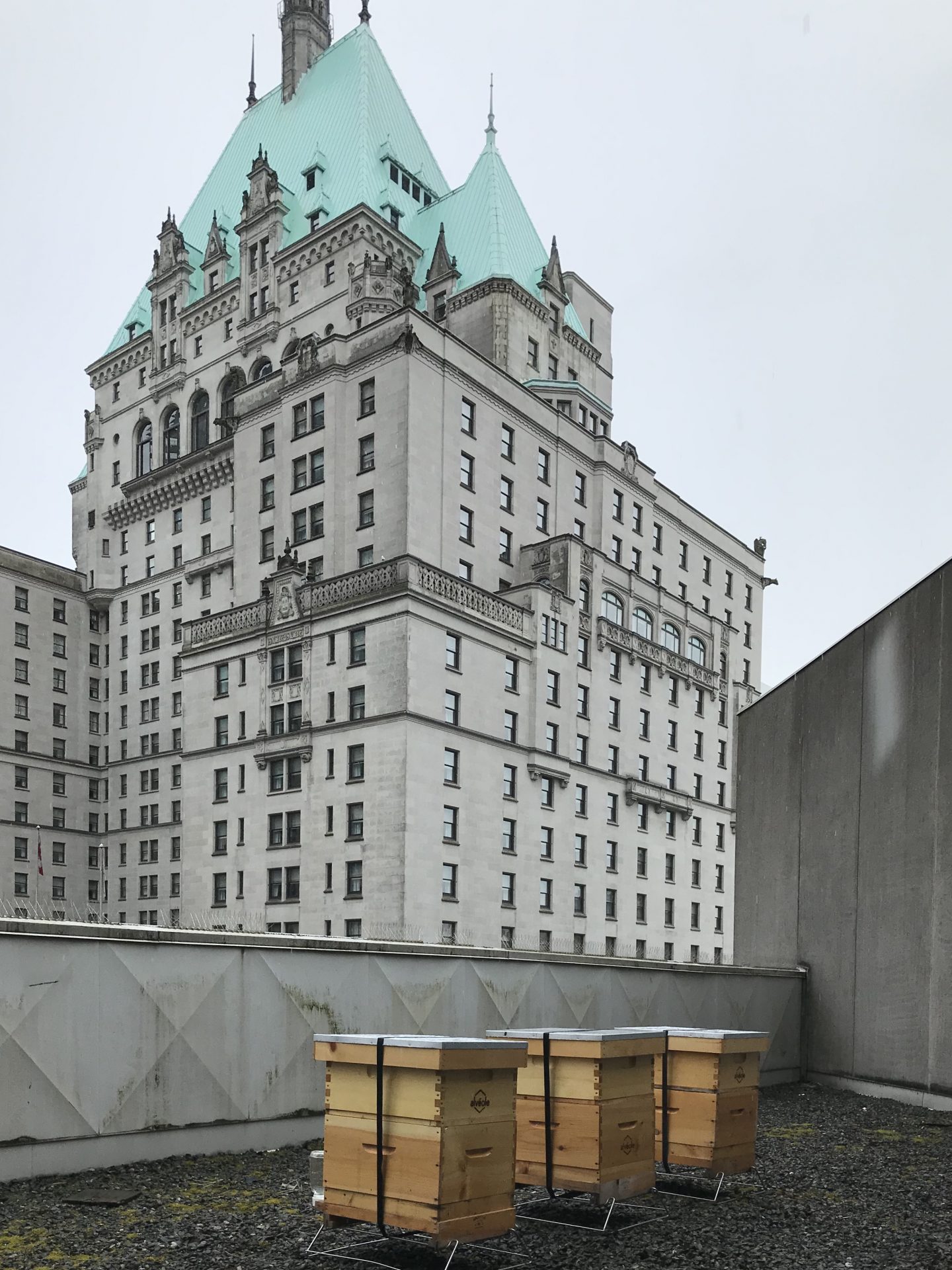 Collison says many people confuse honeybees with wasps, and this can be a challenge during installations as people can be wary of having a beehive nearby. “Honeybees are incredible docile creatures and it’s fascinating to see how much they really don’t care about you,” she explains. “It’s really important to clarify those misconceptions.”

The bees at Royal Centre’s new apiary will pollinate the neighbourhoods around them, and they can cover up to 5 km of surrounding territory while foraging.

Collison says there are already dozens of native pollinators in the downtown area, and they help to keep the vegetation healthy. “The honeybees at Royal Centre act as ambassadors for all pollinators.”

In August, the honey from Royal Centre’s apiary will be harvested. “Honey is an incredible reflection of the landscape around you,” says Collison. “In jars of honey at Royal Centre, you’ll be tasting the trees and the flowers that are surrounding that area.” 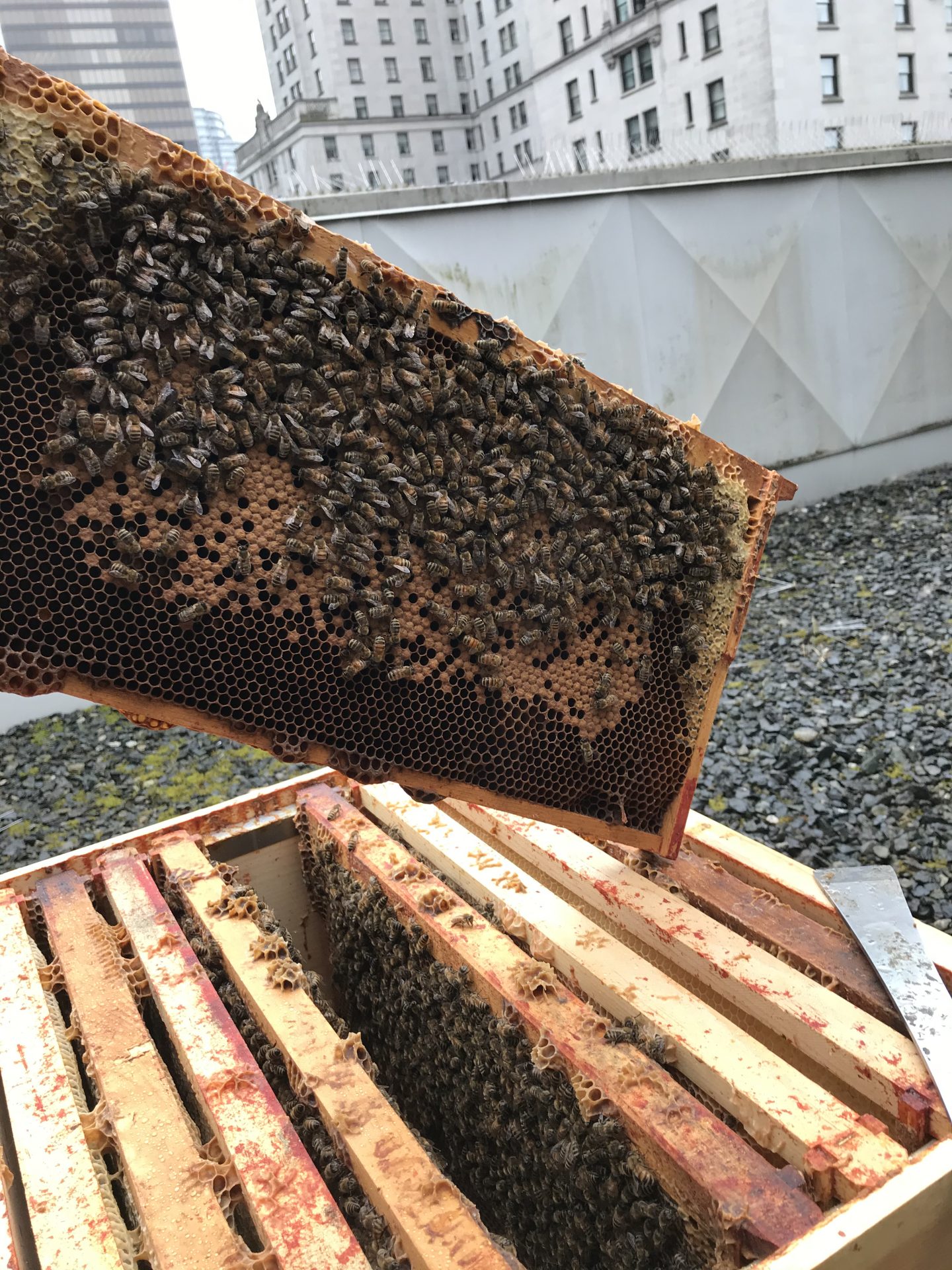 The property has more plans to extend the reach of their fuzzy friends.

“Once everything settles with COVID, tenant engagement workshops will be initiated, giving our tenants the chance to meet our bees and learn the important roles they play within our environment (and that they are nothing to be afraid of),” says Basford.

To celebrate the arrival of the downtown apiary, Royal Centre is asking the Daily Hive community to help name its two new beehives. And to make it sweeter, they are throwing in a $150 gift card for a Royal Centre retailer of the winner’s choice — for each person behind the name that’s picked.

There will be two winners in total as there are two hives to name.

To enter to win a $150 gift card for a Royal Centre retailer of your choosing, courtesy of Royal Centre, do the following:

Contest entries will be accepted from the time and date of publishing until 11:59 pm on June 26, 2020. One winner will be chosen at random and contacted through the platform they used to enter. Contest only available to Canadian residents outside of Quebec.