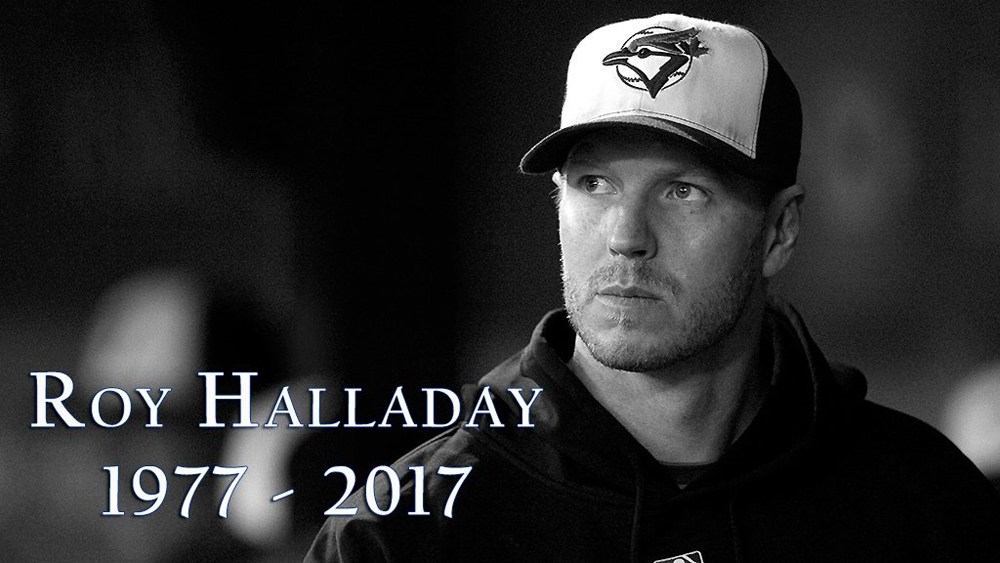 The baseball world is in mourning and shock after the passing of one of its own. Unexpectedly on Tuesday afternoon, news filtered down about the passing of former Toronto Blue Jay, Roy Halladay.

Words can’t begin to describe the gravity of this loss, but fans and players alike are trying to put into words what the man simply known as “Doc” meant to them. Tributes are pouring in from Halladay’s former teammates, many who took the field during his tenure in Toronto.

Halladay was the elder statesman of the Blue Jays’ starting rotation in the mid-2000’s and unquestionably left his mark on many young pitchers who came up after him. During the 2009 season, the baton was unofficially passed from Halladay to Ricky Romero.

Devastated and heartbroken. Doc, thank you so much for all of your advice and for teaching me how to be a pro. Will never forget you and will make damn sure Sebastian grows up understanding what kind of player and man his daddy got to play alongside. You will be missed my friend, may you rest in paradise 🙏🏾 my heart goes out to your family.

In 2008, Halladay combined with A.J. Burnett to make one of the most lethal 1-2 starting rotation punches in all of baseball. Although their most memorable moment be may squaring off as competitors the following season, Burnett noted how much Halladay meant to him as a teammate and friend.

The best I've ever been around. Incredible athlete and more importantly, an incredible man. My prayers go out to Brandy, Braden, and Ryan. Love you DOC! I'll never forget you and all you did for me and my family! #RIPDoc

As Carlos Delgado was just reaching the peak of his career in Toronto, Halladay was just beginning his infancy as a Blue Jay. It wasn’t long after that Doc was “rebuilt” by heading down to Single A, not before returning three years later and capturing the first of his two Cy Young Awards.

#RIP my friend. One of the toughest competitor in the game. Great teammate #classact

Although Halladay was traded to the Philadelphia Phillies before J.P. Arencibia made his Major League debut, Doc still made a lasting impact on the Blue Jays’ former catcher.

Doc. I can remember first time catching your bullpen thinking it was one of the coolest things i had ever done. I will never forget contrasting with you thinking, man i want to talk to him so much but I’m too intimidated. You were a surreal human to me. I’ve never seen anyone work as hard or be as professional as you. Competing against you and looking out at the mound is something I’ll never forget. You meant and mean a lot to so many. RIP Doc “Heroes get remembered, but legends never die” #Legend

Jesse Litsch was one of Halladay’s former rotation-mates from 2007 to 2009. Pitching behind one of the best arms in the American League, Litsch tried to soak up as much knowledge as he could from the Blue Jays great.

RIP DOC thanks for being such a huge influence on me and helping mold me in to the big leaguer I was, I will be forever grateful for everything you did for me, you were a true gamer and good person gone way to soon 🙏 for the family

Vernon Wells was there first-hand to witness Halladay’s greatness every five days. As a Gold Glove defender, Wells helped Doc out with some stellar plays in centre field.

One of the best to ever do it. I had a front row seat to watch his greatness. RIP Doc. 🙏🏾 to Brandy and the kids.

He may have only spent one season in a Blue Jays uniform, but Bengie Molina had the pleasure of being behind the plate for 21 games during the 2006 season. Molina said Doc was one of the best pitchers he’s ever caught.

Wow i feel so sick and sad, what a true COMPETITOR and an AWESOME teammate and friend he was and one of the nastiest pitcher I’ve ever caught!😭wow PRAYERS for his whole family!!🙏🏽 #RIP Doc✝️ @BlueJays pic.twitter.com/ntz1PYI9xq

Off the field, Chris Carpenter and Halladay were dear friends, even “fishing buddies”. The two made their way up the Blue Jays’ minor leagues together and Carpenter passed on his condolences.

Statement from Chris Carpenter on the passing of his friend, Roy Halladay: pic.twitter.com/7gISojZsPH