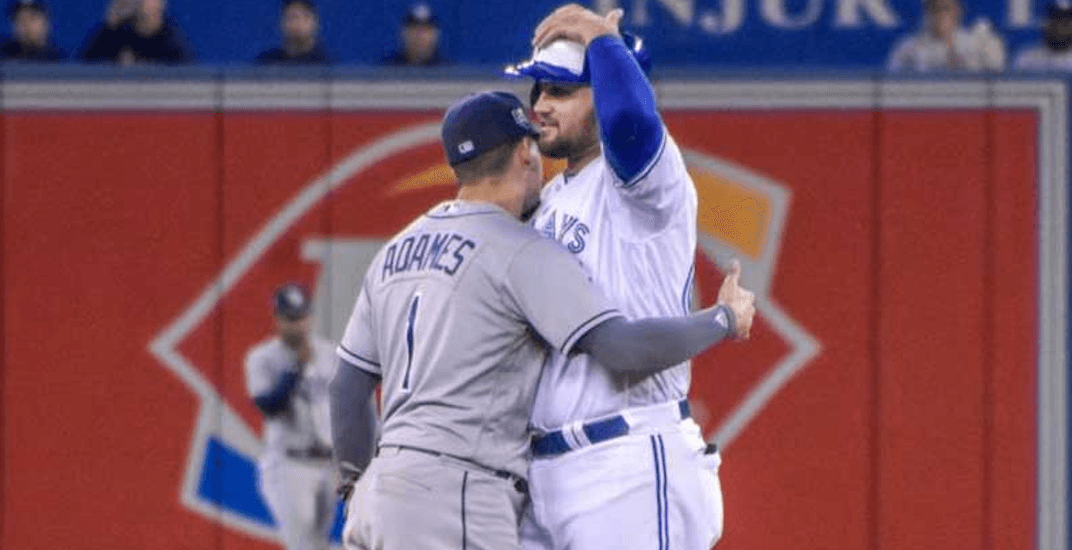 There haven’t been many feel-good moments surrounding the Toronto Blue Jays this season. In the middle of a game that had almost no bearing on the standings, one young Blue Jays prospect provided the most heartwarming moment of the year.

That prospect is Rowdy Tellez. He’s had a long and winding road to the Major Leagues and became the 11th rookie to make his MLB debut for the Blue Jays this season. He was a late-round pick by the Blue Jays in 2013, but slowly crept his way up the team’s prospect rankings.

That culminated with a promotion to ‘the show’ earlier this week.

He didn’t waste any time whatsoever in making an impact on the game. With the very first pitch he saw from a Major League pitcher, Tellez connected for a double to the right-centre gap.

Let's get the firsts out of the way!

It wasn’t just an extra-base hit for Tellez. It meant something more.

Two weeks ago, he lost his mother Lori after her long batter with cancer. Once Tellez reached second base, he pointed to the heavens as a tribute to his late mother. Then, after the game, he inscribed the word “Mom” in the dirt.

Yes, there’s crying in baseball … and there’s nothing wrong with that.

Tellez also had a short embrace with the Tampa Bay Rays’ infielder Willy Adames at second base. Even though he was a competitor, clearly, Adames understood the gravity of the situation. In that very moment, it was just one person helping out another through a tough time … even if that interaction only lasted a few seconds.

“It was all for mom,” an emotional Tellez, fighting back tears, told Sportsnet’s Hazel Mae after the game.

In a prior interview with Sportsnet, the 23-year-old revealed he contemplated sitting out the rest of the season after his mother’s passing. Devon Travis was one of his teammates who encouraged him to keep persevering. Tellez’ hard work and determination paid off with a promotion to the Blue Jays earlier this week.

The following year was one of Tellez’ most challenging years professionally and personally. As his mother valiantly fought cancer, Tellez struggled on the field, posting the lowest numbers of his minor league career. However, he persisted and rebounded this past season with some very respectable numbers at Triple-A with the Buffalo Bisons.

Tellez isn’t in the same echelon as Vladimir Guerrero Jr. or Bo Bichette in terms of ‘can’t-miss’ prospects, but in this one special moment, the California native put his own stamp on the 2018 Blue Jays season.