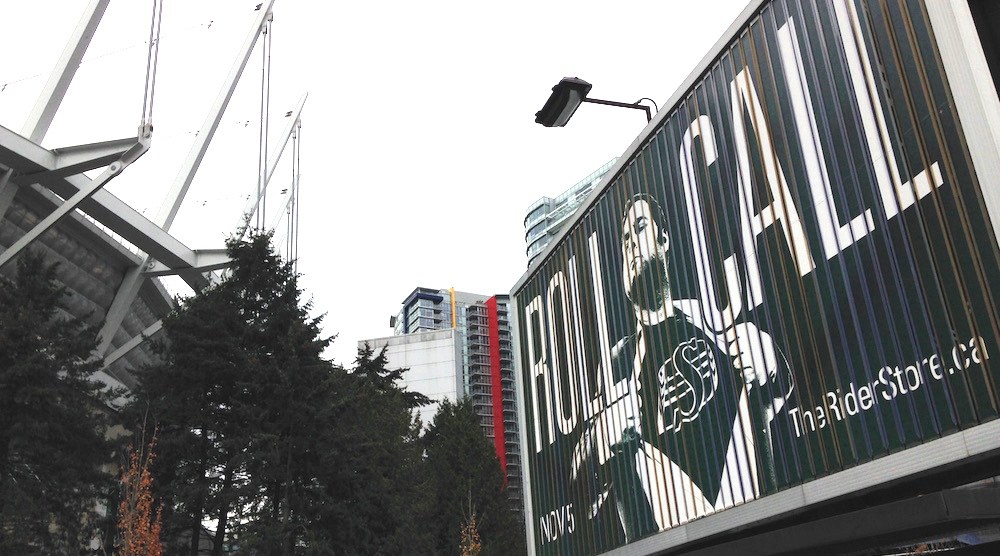 Oh no, a Saskatchewan Roughriders billboard ad has popped up in Vancouver!

The ad, presumably paid for by the Riders, reads “Roll Call” and sits in a parking lot across the street from BC Place with less than two weeks before Saskatchewan’s only visit to Vancouver on November 5th.

I’m sure it has Lions fans shaking in their boots.

The Roughriders, who have fans across the country, have put up billboards in many CFL cities.

In August, they did something similar in Hamilton…

…before getting lambasted by the Ticats 53-7.

In 2014, the Riders put up a billboard in Vancouver that read “Green is the New Orange,” which drew enough attention to get the Lions to guarantee a win for that game. Unfortunately for BC, they lost 20-16.

This billboard ambush made sense in 2014, when the Riders were the defending Grey Cup champions. But now?

Will anyone care this time around? The Riders, with a 5-11 record are a terrible football team. They’re going to miss the playoffs, as they did last year when they finished the season with just three wins.

The Lions, by contrast, are tied for the second best record in the CFL at 10-6, which is extra impressive when you consider they’ve only had a chance to pad their stats against that garbage team from Regina once this season.

Even if the Riders sweep the final two games of the season against the Lions, BC will be in the playoffs and Saskatchewan won’t.

Maybe fix your dreadful football team next time before you try peacocking in this city?