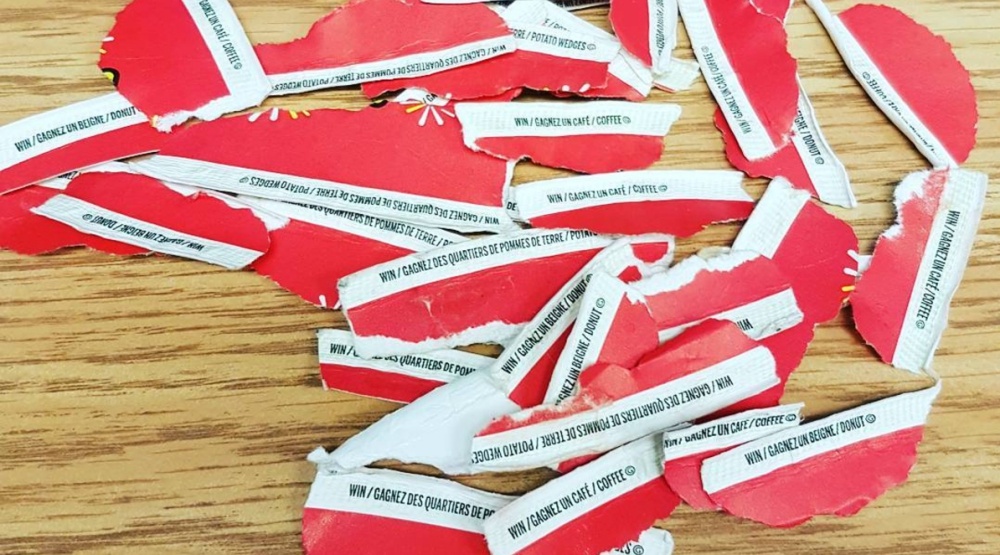 This article has been updated to include additional information about tearing (or not tearing) your winning cup rim.

The only thing more exciting than taking that first sip of coffee in the morning is doing so knowing that a brand new Jeep could be waiting under that flimsy plastic lid.

Canada’s favourite season is back, and we’re not talking about the NHL playoffs — we’re talking about Roll Up The Rim To Win at Tim Hortons.

Officially launching on February 6, the 2019 edition of the Canadian lottery features a grand prize of 40 Jeep Compasses, 100 $5,000 Visa gift cards, 1,000 GT bicycles, 50,000 $50 Tim’s gift cards, and enough free coffee and donuts to keep you amped up on sugar/caffeine until next year.

While the cups say that there’s a one in six shot at winning for every Double Double you down in a day, we decided to take a closer look at Tim Hortons official Terms and Conditions to see if there’s anything that could raise  your chances of winning.

Here’s what we found out:

While a large part of the fun is buying your cup and drinking it too, Roll Up The Rim is actually one of those “no purchase necessary to play” events.

All Canadians can request one free cup from Timmies by writing in to:

You only get the one free cup though, and they won’t send it to you until April 17… so given the cost of stamps and the hassle of finding an envelope, we’d say a trip down to Tims might be a little easier.

Make sure you tear it carefully (or not at all)

You won, congrats! Now you’re stuck with an old coffee cup that you really don’t want to carry around with you until the next time you see a Tim Hortons. No worries, all that you actually need to redeem your prize is the tab, right?

While that may be true for redeeming coffee and donut wins (most of the time), there are multiple instances throughout the ol’ terms and conditions stating that ALL of the winning rim tab must be included — especially for that $50 TimCard gift card, because it includes a nine-digit pin code that is crucial for prize redemption.

Don’t miss out on a new car because you turned in a rim that read WIN JEEP COMPA — we’d suggest playing it safe by just keeping the whole cup if you happen to win something bigger than a Honey Cruller.

We’re looking at you, Ontario. Sure, just because you’re bigger and have more people and there are more Tim Hortons throughout your province shouldn’t mean that you get all the goods!

We all know that the one who has the cups is king, and Ontario is looking quite kingly in that regard.

The Jeep Compass is worth $36,700… but you might not actually get it

Tim Hortons values the grand prize at $36,700, but it made sure to include in the rule book that, in the case that they run out of Jeeps or something, the prize can instead be substituted for one of equal or greater value.

Still a solid win, but keep in mind that you could potentially be driving off the lot in something completely different — though it will definitely be a Chrysler, Dodge, Jeep, Ram, or FIAT vehicle.

Also, you need to be of age (depending on your province that could be 18 or 19-years-old) and hold a valid drivers license to be able to win the Jeep, and it has to be picked up within four weeks of arrival at the dealership they send it to.

If you are ineligible to win the Jeep but happen to roll up one of those 40 golden rims, no sweat. You’re allowed to transfer the tab to an eligible spouse, parent, sibling, child, or legal guardian — just make sure they know that they owe you rides for life.

When it comes to food, you’re either going to see a WIN DONUT or a WIN COFFEE on that rim, though don’t let that fool you! A coffee win actually nets you a choice of any sized hot beverage, while a donut win provides your choice of a muffin, cookie, or (of course) donut.

Interestingly enough, 75% of all food prizes are for coffees, while only 25% are for donuts.

That’s a lot of double-doubles.

*Note that this is just based on the cup distribution chart shown above, so the below figures are more of an estimate of how many of each big prize will likely be found in each of the regions.*

Here are the odds

While it may say one in six chance on the cups, here’s what you’re actually looking at for the bigger prizes (at the outset of the competition), according to the Terms and Conditions:

Here’s what it will say if you do win big

Just so you’re prepared for what to look out for when you’re out there rolling, here’s the exact wording of the big wins:

but really, we all know that it will likely read:

You’ve got to be Canadian to win

Well, this one’s kind of a given, right?

If you claim a prize, you automatically agree to (potentially) be in their ads

Here’s the exact wording, just in case you do wind up as part of their publicity down the line:

“By claiming a Prize, Prize claimants consent to the use of their name and/or photograph, and/or place of residence, without further compensation, in any publicity carried out by the Contest Sponsor in perpetuity and in any media worldwide.”

Plaster my face on the cups for all I care, I just want to win a damn donut for once.

Prizes must be redeemed by May 3

All big wins will need to be mailed in, and postmarked, by May 3 with the prize claim form and winning tab, and arrive at the mail-in address no later than May 14. We definitely recommend keeping a copy of all the forms somewhere safe, too!

Don’t expect to get a Roll Up The Rim cup with your morning coffee on April 18. Though, with a minimum of 260,027,640 cups in circulation this year, we doubt they’ll run out any time soon.

Brush up on those math skills, because you’ll need them to answer this one:

(or at least that’s the skill-testing question on the prize claim form, it might be different at your local Timmies.)

It doesn’t actually matter what size your cup is

Despite your gut instinct telling you that the only way to win a big prize is by buying that extra large coffee (even if you’re more of a small to medium kind of guy, and there’s nothing wrong with that), there is nothing stated in the terms and conditions regarding the different sizes of cups yielding a better chance of winning.

Sure, it doesn’t disprove the theory, but if it was the case, you’d think that they’d be advertising that fact to move some extra coffee, don’t you think?

No, you can’t bring in six losing tabs to get a free coffee

Another myth that arises around RUTR season is that, given the one in six chance promised on the cup, you can simply bring in six losses and they’ll have to at least give you a donut or something.

Nowhere in the terms and conditions is that ever stated, or even hinted at… so we’re just going to assume that the worker who may have done it for your buddy’s brother’s friend that one time was just tired and didn’t want to get into an argument.

Don’t believe us? Check out the rules for yourself here.

Good luck on those rolls, Canada!