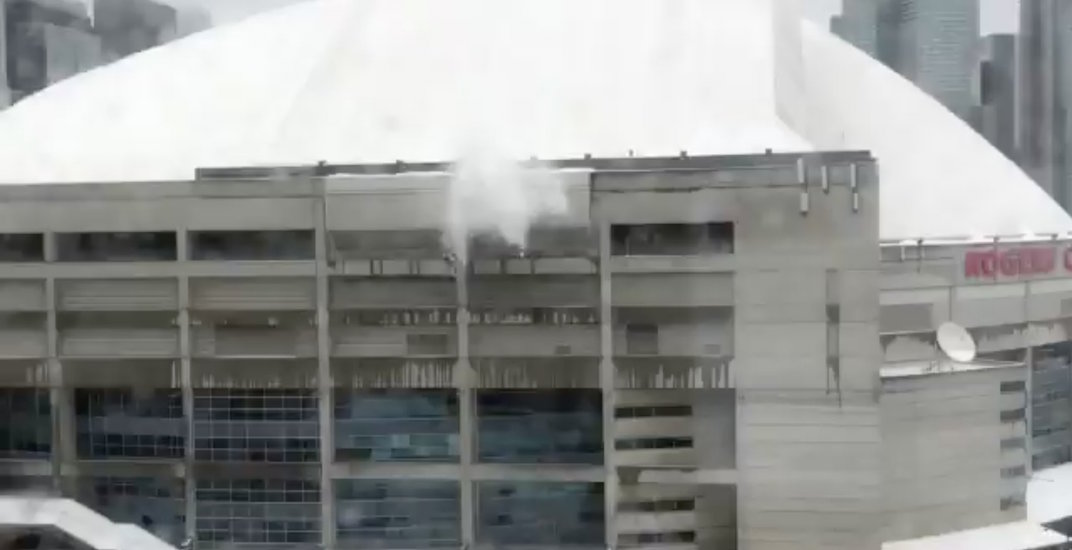 After rain in Cleveland postponed both Blue Jays games over the weekend, it was supposed to be all systems go for their return to Toronto on Monday.

Despite equally terrible weather in Toronto that included an ice storm on the weekend, the three-game series with the Kansas City Royals was expected to go ahead as planned, given the retractable roof at Rogers Centre.

A tarp in RF and a hole. #BlueJays pic.twitter.com/hvIZIdCnKj

Falling ice from the CN Tower has wreaked havoc on the area around Rogers Centre, and even punctured a hole in the roof.

Area around Rogers Centre is a bit messy. #BlueJays pic.twitter.com/3Jben5gZV6

All afternoon the wind has been blowing heavy snow and ice off the roof of the @RogersCentre and it comes crashing down loudly. No warning signs and we’ve been nervous every time someone walks underneath. (Listen with sound on.) #onstorm pic.twitter.com/yp1YYfV43O

Tonight’s game is in danger of becoming just the second game ever at Rogers Centre, and the first since 2001, to be postponed.

The Toronto Blue Jays are currently working with CN Tower and Toronto Police Service to assess the conditions around Rogers Centre and the viability of playing tonight’s game against the Kansas City Royals.

We will continue to assess the situation and provide an update shortly.