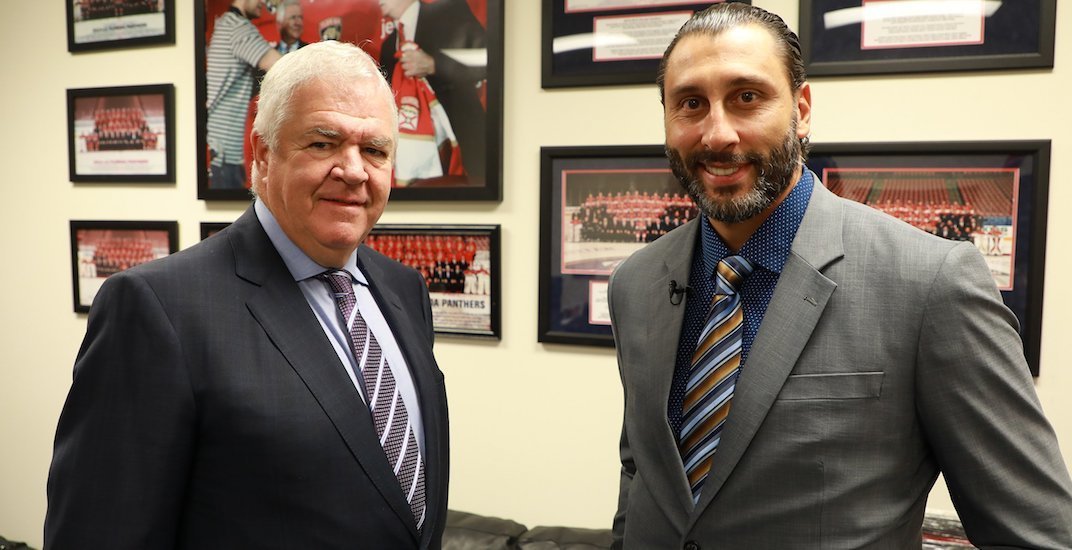 The future Hall of Fame goaltender announced his retirement as a player in June after 19 NHL seasons spent with the Florida Panthers, Vancouver Canucks, and New York Islanders.

On Wednesday, the Panthers reintroduced the 40-year-old in a new role with their front office.

Luongo has been named “Special Advisor to the General Manager,” working alongside Florida GM Dale Tallon.

“I’ve had the honour and privilege to work with Roberto during his time playing for the Panthers and am proud to welcome him to our franchise’s hockey operations staff,” said Tallon in a media release. “Roberto always approached every game with an unmatched work ethic and we are confident he will take to this new role with the same passion.

Luongo, who played 11 seasons during his two stints with Florida, will be getting his jersey retired by the team on March 7. It remains uncertain if the Canucks will bestow him a similar honour. Luongo is Vancouver’s all-time leader in wins (252), shutouts (38), and save percentage (.919) for goalies that played at least 100 games with the franchise.

Though the Canucks aren’t still paying Luongo a salary, a portion of his contract is still counting against their cap. The Canucks are operating with a $3.033 million salary cap recapture penalty this season, as well as the next two years. The Panthers, meanwhile, have incurred a $1.094 million annual penalty over the same duration.