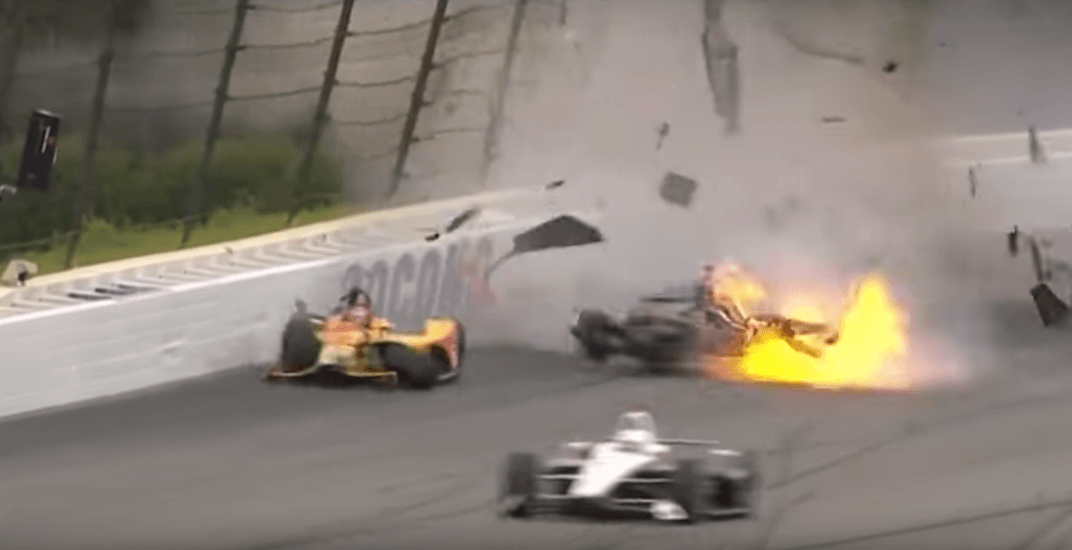 Auto racing fans got a scare on Sunday, in yet another reminder of just how violent and dangerous the sport can be.

Canadian Indycar driver Robert Wickens was involved in a spectacular crash at the ABC Supply 500 race in Pennsylvania, causing him to fly into the protective barricade before spinning out of control.

Debris spread across the track as his car broke into pieces, before bursting into flames.

The 29-year-old Toronto native was awake and alert before being transported by helicopter to hospital. Wickens suffered two broken legs, as well as injuries to his spine, lungs, and right arm.

Wickens was sent airborne when Ryan Hunter-Reay spun out in front of him, his vehicle acting as a launching pad for the Canadian’s car.

The crash impacted five cars, with the other four racers being released from the track’s infield medical centre.

“It’s unfortunate for the start of the race,” said Hunter-Reay. “I was lucky to get out of that one.”

“I’m just hoping Robbie’s all right,” added fellow Canadian driver James Hinchcliffe. “Never good to see a car go up (into the fence) like that, but I know he is in good hands. Hopefully, we’ll see him back in the car soon.”

A red-flag stoppage of one hour and 56 minutes occurred following the crash, so that repairs could be made to the fence.

“Long day and sleepless night, could not shut the brain down,” Tracy wrote. “So relieved that Robert Wickens will be ok, but that again was too close for comfort. It’s long overdue for the racing industry to start looking into a new way of retaining the cars inside the track without poles, fence, and cable. If it were me I would have much rather gone out of the park.

“I know racing is a dangerous game and we know the risks, but it can always be better.”