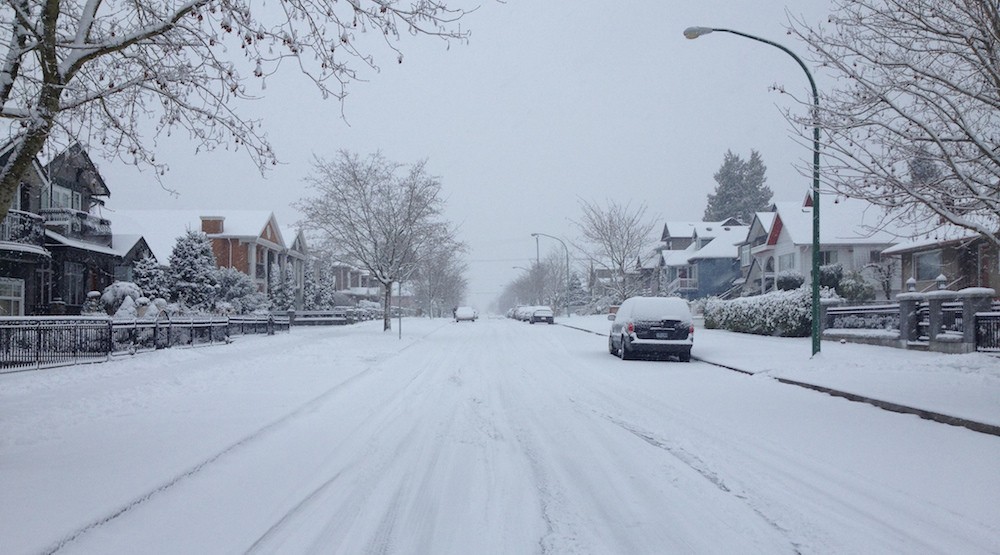 It could be a messy week in Metro Vancouver as forecasts continue to call for the possibility of snowfall in the region as early as Sunday night.

Environment Canada’s latest special weather statement indicates temperatures will fall to a low of -5°C overnight, and it will continue to drop as the week progresses with the arrival of a frigid arctic front. The chance of a major snowfall increases on Wednesday and Thursday when a low pressure system makes landfall and mixes with the frigid air.

The City of Vancouver says its preparations for snowfall and the buildup of ice on roadways began late Saturday and will continue on Sunday. Crews are salting and brining major arterial routes using a fleet of 44 trucks that salt roads and a supply of 1,500 tonnes of salt.

As well, the municipal government has ramped up its snow and ice control capabilities with the addition of two new brine units that can cover more street surface in a single pass. Special equipment has also been acquired to salt Vancouver’s growing network of separated bike lanes.

“We take snow removal seriously and have a comprehensive snow response plan in place,” reads a statement by the City. “When snow hits, our crews make consistent, coordinated efforts to keep main roadways clear — including bus routes, bridges, and major roads.”

Property owners and tenants, both residential and commercial, also have a part to fulfill as they must clear snow and ice from the full width of the sidewalks that surround their property by 10 am the morning after a snowfall, seven days a week. Those who fail to remove snow and ice could be penalized.

Preparations are being made to reduce the likelihood of impacts a snowfall may have on public transit services.

TransLink says SkyTrain will run empty trains throughout the night keep tracks clear of snow and ice and take measures to prevent track switches from freezing. The entire network of trolley electric wires will be de-iced if there is a forecast risk of frost or ice.

Additionally, articulated buses may be replaced by ‘traditional’ buses as they are more capable of handling hills or streets with poor conditions. In some cases, passengers may be required to walk onto the road to board or disembark a bus; to avoid getting stuck, drivers may choose not to pull into bus stops if a street is not snow plowed.