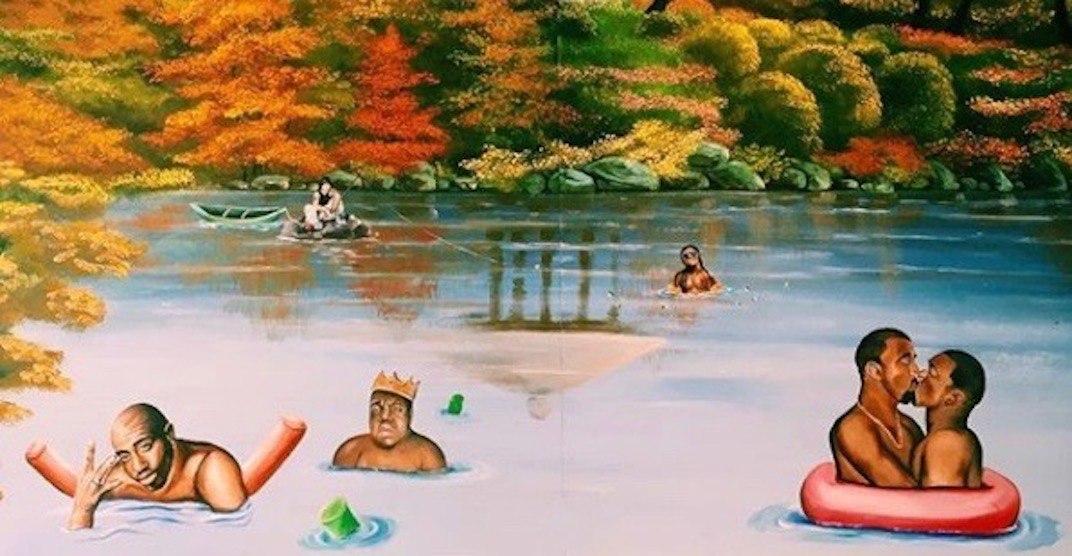 A new Vancouver eatery has caught our attention… but not for their food – it’s their mural depicting a fantasy day at the lake featuring hip-hop greats that has us stunned.

Riz Sushi, a brand new poke and sushi spot, has the most random and amazing mural we’ve ever laid eyes on.

Colourful, complex, and confusing – we don’t really know how to feel when we look at it other than amazed. The piece was put together before Riz opened its new storefront when they were just catering, so this has been a well-kept secret… until now.

The mural paints a picture of some of the best rappers in history enjoying a day at the lake.

Biggie and Tupac on colourful floaty noodles, Lil Wayne straight chilling in the water, Eminem fishing, and Nicki Minaj in her infamous Anaconda music video booty squat in the gazebo.

But the pièce de résistance has got to be Kanye West kissing, well who else, Kanye West in an inner tube while Jay-Z peeps them from the other side of the lake.

What else can we say other than we are CRY-ING.

The mural was completed in 2016 by painter/tattooer Arden Daniel Alexander Ross (Instagram @kidmarrow) and artist James Ritchie (@dr_ritchie). It features a number of icons, including Drake, so you can stare up in awe as you enjoy that spicy tuna bowl.

What could be better?