If you’d like to join the “live in the past” movement, you should read Ice Storm – The Rise and Fall of the Greatest Vancouver Canucks Team Ever, a recently published book that chronicles Mike Gillis’ tenure as president and general manager of the team.

See, while no Canucks fan will ever forget how it felt to finally beat the Chicago Blackhawks in overtime of Game 7 or how electrified Vancouver was during the 2011 run to the Stanley Cup Finals, the city won’t soon forget the way Gillis’ time here ended either.

The Luongo saga, Kesler’s trade demand and John Tortorella’s storming of the Calgary Flames dressing room will be added to the list of memorable/torturous/par-for-the-course-for-Canucks-fans stories.

What has been forgotten is that the Canucks were the absolute class of the NHL for three years. They dominated the league two years straight, winning two Presidents’ Trophies, and players around the league wanted to be part of Gillis’ organization.

Bruce Dowbiggin, the book’s author, is a hockey reporter based in Calgary and has known Gillis since the mid-90s. He tracked every move Gillis made since becoming GM in 2008.

The book revisits all of the GM’s bold moves (if you’re shaking your head that he made any, you’ve forgotten that he named Roberto Luongo captain in 2008) and all the changes that happened behind the scenes that gave Vancouver the competitive edge.

I sat down with Dowbiggin on Friday to talk about the Gillis era, amongst other things.

My Fireside Chat with Bruce Dowbiggin

Where did you come up with the idea to write this book?

I’d known Mike Gillis a long time. I went to see virtually every day of the trial (between) Alan Eagleson and Mike Gillis…

Mike also allowed me to do some work with him in a book, Moneyplayers, that I wrote. I sat with him when he was doing the Bobby Holik and Tony Amonte contracts…

He used to always talk about this team or that team, here’s what they do wrong and here’s how I can exploit them for my clients. He said ‘if I was to run a team, I would do X, Y, and Z.

How do you think the Aquilinis heard about Gillis?

There were people in the hockey community who knew of Mike and knew he was a different thinker. The Canucks were looking for somebody who wasn’t going to be the same old same old.

You don’t think they had met him before?

The thing about Mike is, and I know this sounds a bit naive, but I like to think I know when someone is BSing me or not, and I’ve never known Mike to tell me something that isn’t true. If he’s in a position to have to lie about something, he just says nothing, so when he tells me he wasn’t involved in this great campaign to stab Dave Nonis in the back, I believe him.

It (Gillis’s hiring) just happened so quickly, so people speculate… 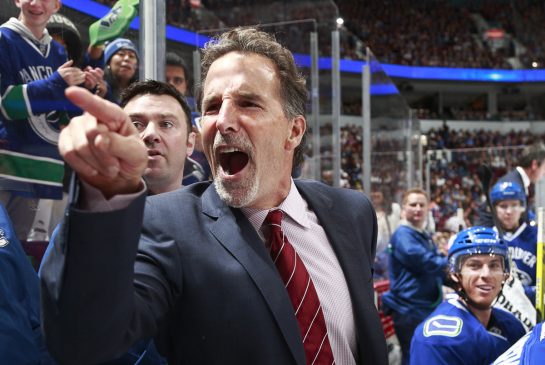 There was a sense that the organization wanted someone different than Vigneault. I think there was a lot of voices that had input into it.

But do you think the Aquilinis made that decision?

I have no evidence to say that they did. They have said they didn’t… I would suggest that they had a keen interest in who was hired next, and I think they approved of Tortorella, the same way Mike did.

It was a huge mistake. In defense of the team, Tortorella undertook some stuff that he didn’t deliver on. He promised he wouldn’t be “Mr. psychotic-out-of-my-mind guy” and when the pressure built up, he wasn’t disciplined enough to do it.

And as bad as going into the Calgary dressing room was, the Luongo thing at the outdoor game was worse. It was perverse almost in how he did that, and then starting Eddie Lack 19 games in a row – at the end it was almost like he was doing things to lose. 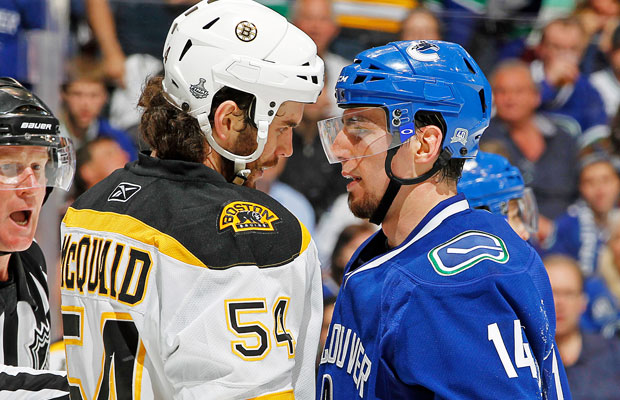 Why do you think the Canucks lost the Stanley Cup Final against Boston?

They lost the series because they ran out of healthy bodies. They were missing four starters and they had three other guys who could barely move. The Bruins had one guy, Horton, who wasn’t even a key guy to them, who was out. They had all their other guys. Had they been as healthy as the Bruins, they would’ve won.

OK, but you included a Mike Milbury quote where he said the Canucks shouldn’t have poked the bear (in reference to Alex Burrows biting Patrice Bergeron’s finger). Wasn’t that a bit of revisionist history?

Well there’s always that thing – don’t stir them up. I mean, don’t bite the guy’s finger…

But if you beat a team, you’re stirring them up, aren’t you?

On one hand they care about Daniel Sedin standing there and taking punches, and on the other hand, they give a crap about biting back. Which is it? But that’s Milbury.

You had a quote from the musician Dave Bidini where he said if Boston hadn’t pushed Vancouver around the way they did, there might not have been a riot.

I don’t think I’m exaggerating when I say people in Vancouver have a bit of a chip on their shoulder. They really want to be taken seriously.

Had the Canucks gone down fighting, had they been the kind of team that fought all the time and when they started losing games got into brawls and stuff, I think Vancouver people might’ve been able to accept it. They would’ve said well we didn’t go down without a fight… 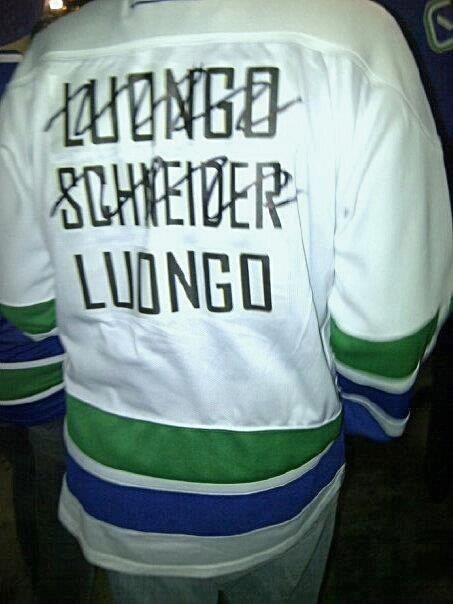 Did the Canucks change course after 2011? You wrote things changed after the Boston game in 2012.

From then on, the league seemed to reflect Boston’s style more than Vancouver’s style. They (Vancouver) defied it for as long as they could and then they finally threw their hands up and said ‘look, we can’t win this way. We need to be on the power play six or seven times a game for this scheme to work the way it used to work. It’s not that way, so now we’ve got to adjust.

In a salary cap league you’ve got to move the more expensive guy. The minute they did that (decided to move Luongo), and Louie had the no-trade clause, he had the hammer.

There were 18 months in which Louie just wouldn’t give up on his dream to go to Florida.

But he handed out all those no-trade clauses.

If you look at the Canucks, their highest earning guys are the Sedins at $6.1 million. Those are brilliant contracts for the team. When they signed Luongo, their dilemma was Louie could probably have gotten 7 on the open market, so how do we give him somewhere in the neighbourhood of the Sedins and keep him. Well you do that by giving him an extended contract and by giving him the no-trade…

Long term contracts at the time looked good. Detroit signed Zetterberg to one. There’s a whole bunch of them out there. They got bushwacked by the NHL when it changed the rules in the lockout.

The Aquilinis obviously bought what Mike Gillis was selling when they hired him. Did they lose faith last year?

The turning point was when Francesco’s name was brought up at the trade deadline. The Penguins said, ‘We had a deal but the owner wouldn’t let it go through.’ Whatever Mike wanted to do in taking responsibility, now the public was seeing that the owner was involved. I think at that point, the owner needed somebody to blame.

The reason I say they were desperate is, Trevor Linden – he’s got no experience. If you’re really serious about winning, you don’t hire a guy who’s been selling glasses and elliptical machines for six years. You hire a guy who understands the president’s job today.

You’re not sold on the direction the team’s taking now?

You mentioned in the book that the Canucks did a lot of research – white-labcoat type stuff, and it wasn’t all made public. Is there anything you can mention?

There was a time they were looking to measure skin temperatures to see how guys dealt with stress. Craig MacTavish (Oilers’ GM) made the comment that maybe (the Canucks) were being too analytical and trying too many things. Mike understood that there was very little separating the top teams and he had to find the things that did make a difference. The travel stuff did make a difference.

It seems like you really respect the bloggers. There were a number of quotes from Pass it to Bulis and Canucks Army.

The thing that struck me was how much more interesting and creative the bloggers were and reading stuff like Harrison (Mooney) and stuff like Thomas (Drance). How much more perceptive – I guess they weren’t bound to the conventional reporting stuff that everyone else was doing. I was really impressed by that. I prefer reading the Vancouver (bloggers) oftentimes to the mainstream reporters.

Were you waiting for the end of Gillis’s tenure to publish the book?

No. We thought the book would come out halfway through his tenure with the Canucks. This was the sad thing about it – had they won Game 7, the whole hockey world would have looked at what the Canucks were doing and said, ‘That’s the model.’ Because of one game, everybody said ‘Boston, that’s the model.’ They would have had a legacy and the book would’ve talked about it and how other people had picked up on it.

Where are we now?

Is Vancouver still a destination?

Not at the moment. It’s toxic. If you’re a player or agent right now there’s major questions about what this ownership wants out of the team, what kind of team they’re going to have going forward. Everybody sees that he just threw the local hero at the situation to placate everybody.

All those progressive things Mike Gillis was doing – the sleep monitoring and other stuff – have Linden and Benning scrapped it?

It’s a cruise of the newbies right now. Trevor Linden has never done this job. It appears to me that Benning wants to emulate the Boston model – a more physical model – and I think if the NHL is going to insist this is the style they want, it might be a good idea.

Now… Should you Read it? 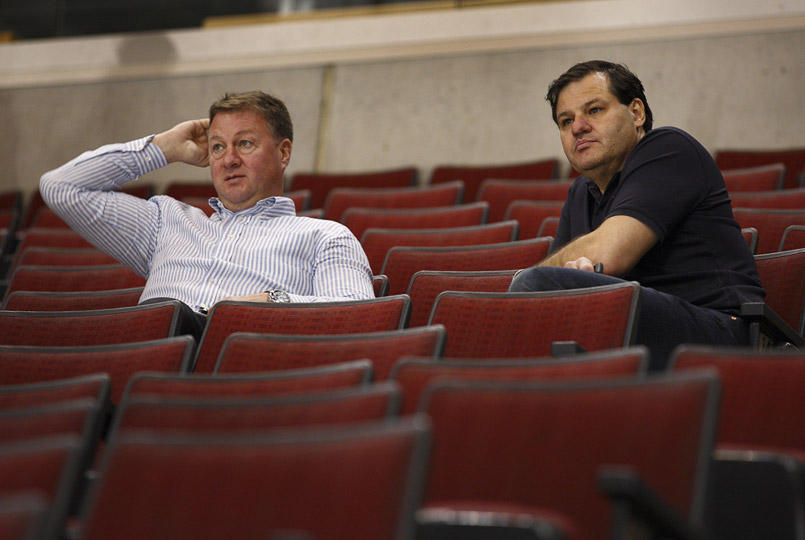 If you’re a Canucks fan and you’re wondering if you should read Ice Storm, the answer is yes.

The book gave insight into negotiations for the Sedins’ contracts; it explained just how badly Gillis wanted Shea Weber, Ryan Suter, Shane Doan and Justin Schultz; and it shed light on much of the non-player improvements that Gillis brought to the team – sleep monitoring, dietitians, performance under stress.

More importantly, it provided background on the Aquilinis – their vision for the Canucks, and why they brought Gillis into the fold in the first place.

There are some questions I’d still love to have answers to: Gillis’ relationship with Alain Vigneault – how did the GM feel when he acquired players such as Keith Ballard and Zack Kassian and AV didn’t want to use them? What really happened between GM, coach and Cody Hodgson? And how did the Ryan Kesler trade demand actually go down?

One more thing: while Dowbiggin clearly is not convinced about the current direction the Canucks are headed in, after reading his book, I am.

When they hired Gillis, the Aquilinis went off the board and hired a strong leader who would do things differently. They proceeded to get out of the picture for four years, letting Gillis do his job. And soon after losing faith in what he was doing with the team, they moved on.

With Linden, they’ve gone in an entirely different direction, but there is one similarity: they’ve hired a strong leader who won’t be afraid to make strong decisions and to fight for his vision. That alone should mean good things for the team.