El Salvador is the smallest and most densely populated country in Central America. It is located on the Pacific Ocean side of Central America. While small in terms of land size and population, it possesses a cuisine that will have you returning for more.

For a taste of El Salvador cuisine you can find it at Rinconcito Salvadorean Restaurant on Commercial Drive. This proud but small restaurant has been in business for 15 consecutive years, so it is obvious that many others have discovered and enjoyed this surprising cuisine.

Born and raised in El Salvador, owner/chef Omar Herrera was classically trained in the culinary arts at the Art Institute of Vancouver. In addition, his mother’s guidance and assistance has taught him the techniques to make authentic Salvadorean cuisine.

The inside of the small restaurant has a Latino influence with bright yellow painted walls; a very casual ambiance with many locals from the Drive in attendance. A small bar and Latin music playing also makes it an inviting stop.

The indigenous Pipil population and Spanish immigrants have the greatest influence on the cuisine. The sheer size of Mexico and its proximity to El Salvador makes an additional factor in their choices of ingredients and seasonings. If you enjoy Mexican food, for certain you will find commonality with Salvadorean cuisine.

The food is fresh every day with nothing pre-made in the kitchen, and there’s no microwave on the premises. Many of the dishes would be described as comfort food and will be made to your unique order. Some of the more recent dishes on the menu are common street food in El Salvador.

Fortunately, Rinconcito Salvadorean has a good selection of authentic drinks. For non-alcoholic selections you have Horchata and Tamarindo, plus some juices. Horchata is a rice-based beverage that is white and milky with the taste of cinnamon prevalent with ground almonds. The cantaloupe juice was very tasty and fresh. They also have a good selection of Mexican beer. 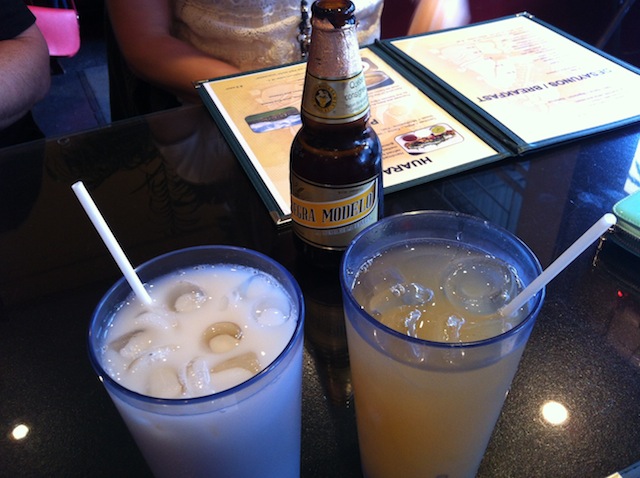 There are many choices for appetizers, or antojitos. Tostadas are a crispy corn tortilla layered with optional toppings. For toppings you have many choices. A huge hit was the Chorizo. This tostada was flavourful and carried a spicy hit. The cilantro and onions contributed to a very tasty dish. The carne (steak) tostada was tender and a bit like pulled pork in flavouring, but more plain than the chorizo. 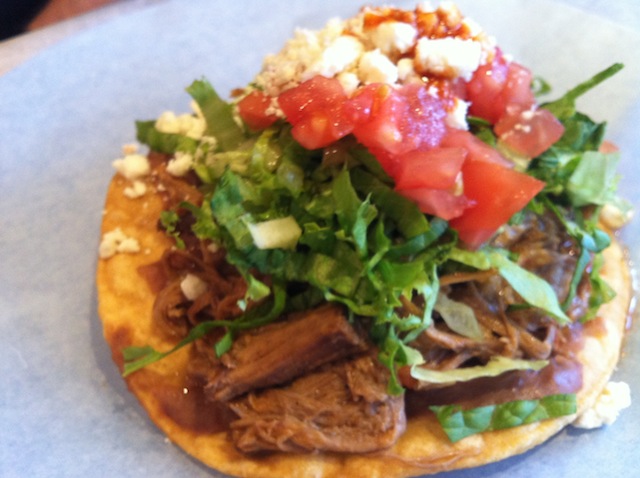 Another excellent appetizer was Casamiento. Fried rice and beans served with cream and tortillas. A very simple dish, but delicious flavours given the beans were cooked perfectly and were lightly seasoned. The sour cream dip complements the beans and rice. 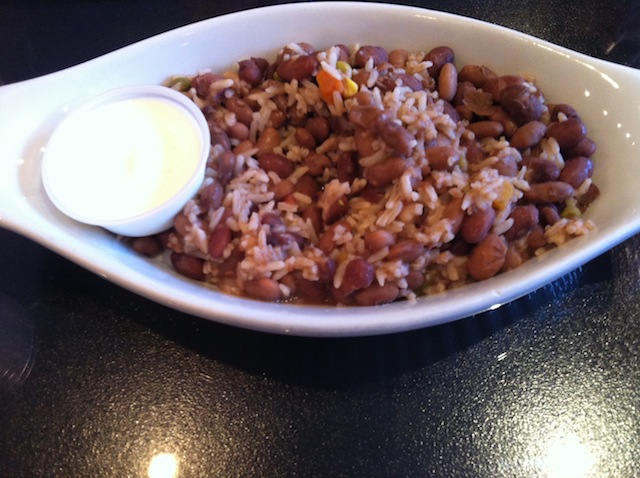 A very authentic Salvadorean appetizer is Yuca con Chicharron. Diced crisp pieces of pork rind combined with a very flavour-filled cole slaw helped this appetizer disappear very quickly. The deep fried cassava root (like French fries, but thicker) were crispy and possessed a nice crunch. Quite the difference in texture within this dish and unanticipated in a good way. 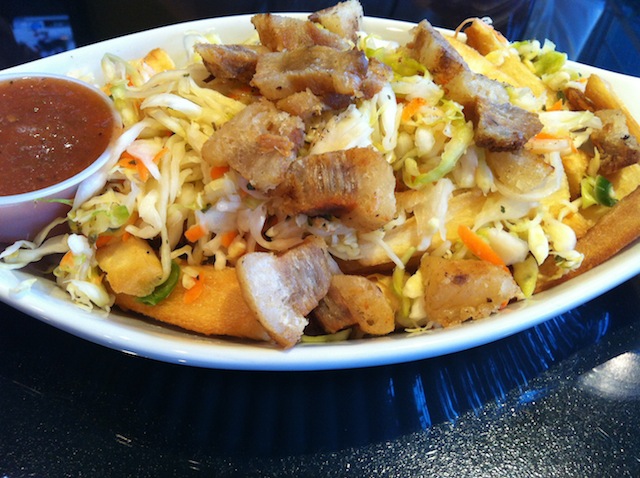 Perhaps the most well-known and traditional Salvadorean food is Pupusas. A pupusa is made of a thick handmade corn tortilla using a maize flour dough. The filling can be a blend of melted cheese, cooked pork meat and refried beans. Or you can order these ingredients separately from the menu. At $3 per pupusa, you can indulge yourself with each filling or combo fillings. A warning: they are very filling despite their appearance. For certain, the fillings are fresh and the fillings melted together into a paste. 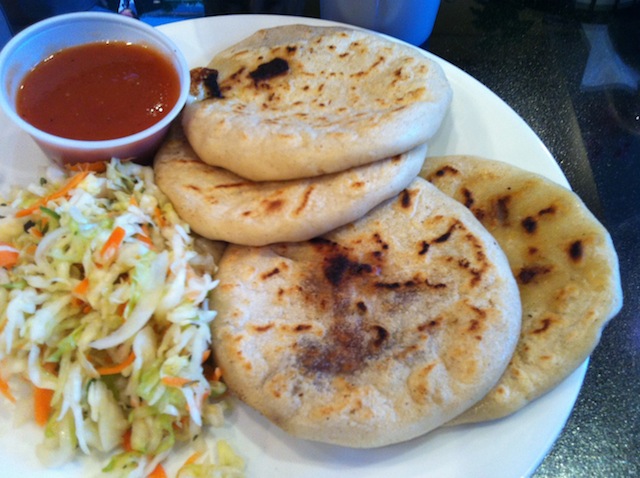 You can order breakfast-style dishes all day at Rinconcito Salvadorean. One dish to try is Desayuno Salvadoreno. Salvadorean-style eggs with fried plantain. Small pieces of egg scrambled with onions, peppers and tomatoes. The plantains are sweet and very heavy with the grease. The refried bean sauce was salty, but offered a contrast to the sweetness of the plantains. 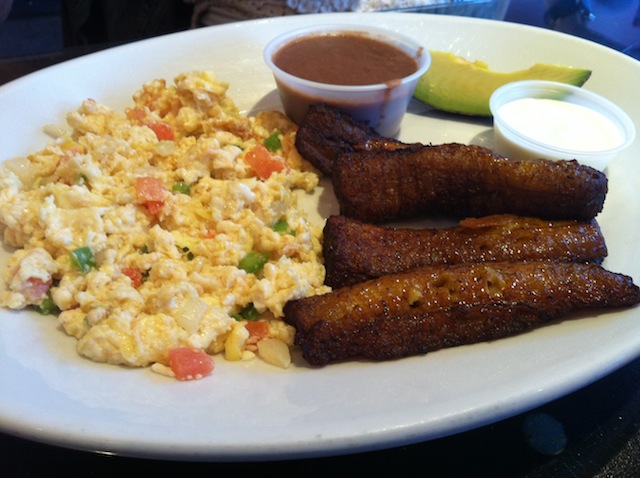 A more Mexican influenced dish is the Carne Asada. Carne is steak and this is a very thin steak with clear grill marks and very tasty. It was not tender, which was surprising given it was thin like a sandwich steak. 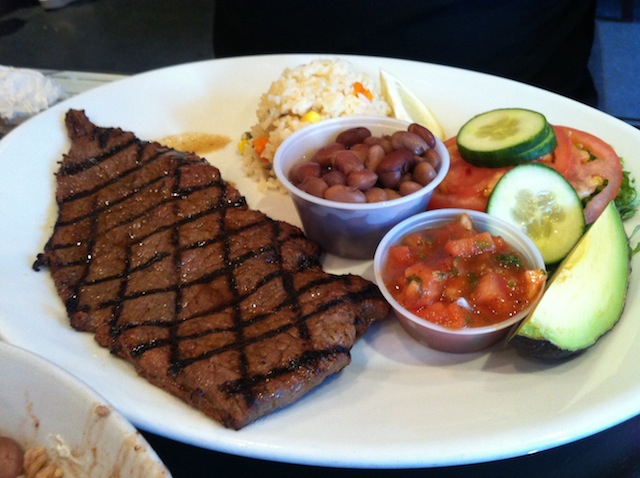 The Huaraches can be found in El Salvador in restaurants and as street food. Handmade grilled tortilla layered with refried beans, grilled peppers, melted cheese and side dippings as well. There are a number of choices for the toppings. The crumbled chorizo was excellent. All the ingredients were fresh and different textures to combine into a memorable dish to be ordered again. 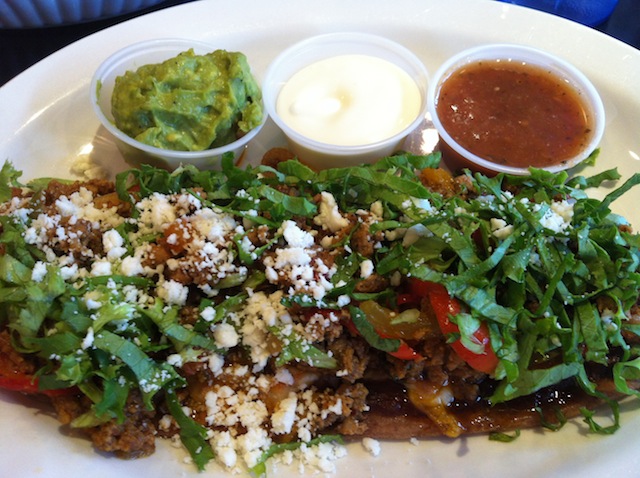 Time to try the most popular dessert, their version of Flan. Flan, or crème caramel, is well-known in the Latin world. This labour-intensive dessert is homemade and very rich, but clean to the palate. Not overly sweet, with a strong cinnamon taste. Flan is not a pudding as it is denser. Well worth keeping a small appetite for the flan finish. 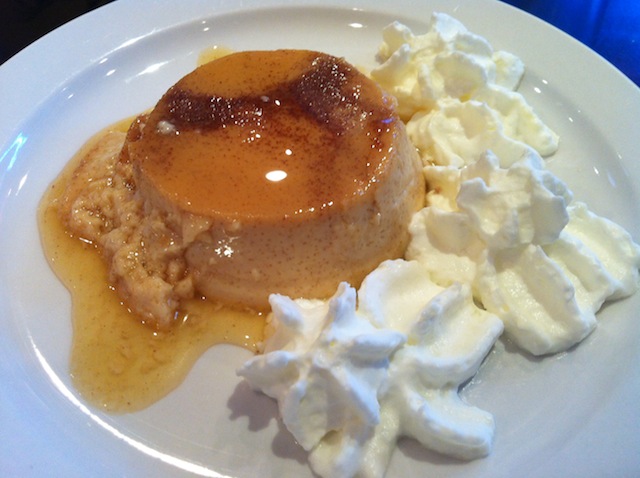 Rinconcito Salvadorean Restaurant has take-out service. Entrée prices range from $10 to $14, so it’s very reasonable. The place is clean and has a great energy courtesy of the food and the area. It can be very busy so you might want to get there early. During the summer, they have tables on the sidewalk. Regrettably, they are not online but expecting to get this going in the autumn months.