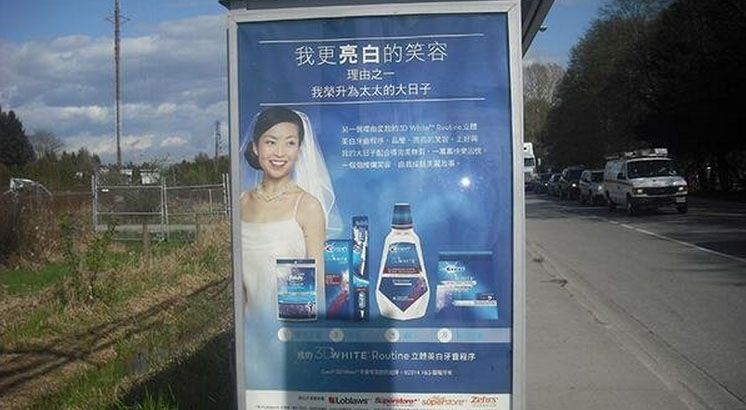 All advertising on bus shelters and bus benches in Richmond must now be at least 50% in English, after concerns were raised over Chinese-only ads in the city.

The new language rule is part of a new contract the City has signed with Pattison Advertising for the provision of street furniture; no bylaws have been changed.

Under the contract, Pattison pays for and installs the bus stops and benches, and in turn sells ads on the street furniture, sharing the profits with the City.

According to the agreement, any advertising in a foreign language must include at least 50% English, in terms of overall space, font size, content, and level of detail.

If a client doesn’t comply, the City will have to approve the language ratio proposed. There will no specific penalty, but Pattison cannot accept ads from non-compliant clients.

More than half of Richmond’s 200,000 residents are of Asian descent, many of them of Chinese heritage, while others immigrated from Japan, Taiwan and the Phillippines.

“Many residents feel excluded when they see signage or advertising that is in a language they can’t read,” said Townsend.

“We are fine with Chinese being used on signs, as long as English is at least equal or higher in prominence.”

Townsend said the majority of private signs in the city use both English and Chinese, with fewer than 3% predominantly in Chinese or in Chinese only.

Last year, the City undertook a major review of language on private business signs, but decided not to bring in new regulations right away. Townsend says the City still prefers these signs to be at least 50% in English as well and have been educating business owners about it.

“We’ve found this to be very effective and many businesses have changed their signs to reflect the City’s preference,” said Townsend.

The City of Richmond will be proposing a new signs bylaw later this year, aimed at “decluttering” – limiting how much space on storefronts can be used for signage.

“This approach has been used in other cities in Canada and Australia where there were concerns about language on signs,” said Townsend.

“While it doesn’t directly deal with language, it reduces the overall visual impact of signage by limiting the amount of space it consumes.”