Richmond RCMP are asking for the public’s help in identifying a man believed to be involved with the attempted theft of one car and the successful theft of another.

In a release issued Thursday, May 11, police said that just before 3 pm on Friday, March 24, Richmond RCMP officers responded to the area of the 8300 block of Granville Avenue.

A woman had parked her black 2015 Honda CR-V in front of a convenience store, when a man grabbed her car keys and attempted to drive away in her vehicle.

However, police say, after apparently being confronted “by a Good Samaritan and frightened off ,” the man fled the scene on foot.

He then reportedly ran a short distance to a neighbouring townhouse, where, less than three minutes later, he stole a grey Honda CR-V.

Police say that as the man drove away from the scene, he struck the owner of the grey Honda CR-V with the car.

The vehicle’s owner was not hurt, but police are now looking for the grey 2013 Honda CR-V, which has British Columbia licence plate: 102RWW, and the man driving it.

Richmond RCMP has released a forensic sketch of a suspect, in addition to security footage in the hopes that someone will recognize him. 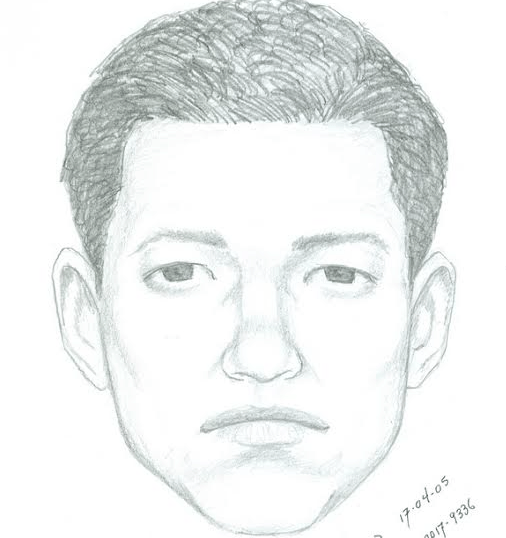 A sketch of the man Richmond RCMP are looking for. (RCMP handout)

According to police, the suspect is described as:

“We appreciate any information you may have about these incidents,” said Richmond RCMP Cpl. Dennis Hwang. “We would very much like to find this individual and hold him accountable for his actions.”