Richard Sherman, the Seattle Seahawk cornerback, is classless. Interviewed following his team’s NFC Championship victory, he exploded into the microphone:

“I’m the best corner in the game. When you try me with a sorry receiver like Crabtree, that’s the result you gonna get! Don’t you ever talk about me!”

Many people don’t think his reaction was a problem. They believe his honesty is refreshing, and the sports world needs more unfiltered comments like these. Others say he was in an emotional state, and can’t be blamed. And some just don’t see what the big deal is, or why anyone would be offended.

But it is a big deal. Sherman was speaking on a massive stage with an entire country watching. It matters because his example will be followed, his actions emulated. 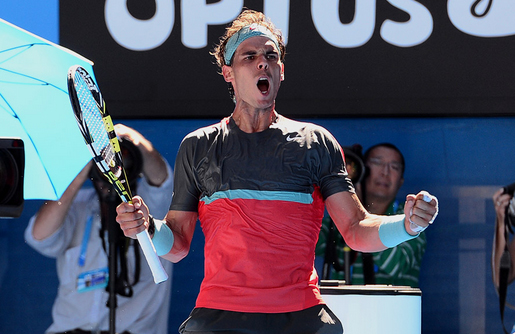 Days later, and on the other side of the world, Rafael Nadal was interviewed immediately after a gruelling four-set Australian Open quarter final. The world’s top-ranked tennis player was asked how he managed to win a back-and-forth third set tie breaker against Grigor Dimitrov.

Despite his emotional state, Nadal laughed sheepishly and replied, “I was so lucky.”

Rafa, one of the most intense competitors on the planet, went the opposite direction under similar circumstances. He was humble and gracious despite the adrenaline pumping through his veins.

These guys are role models

Every single sports fan out there (yes, I’m talking about you) was once a kid watching his or her favourite player. You didn’t just watch, You wanted to grow up and be like Gretzky or Mike.

You took cues from them. You tucked one side of your hockey jersey into the back of your shorts or licked your fingers before shooting. You celebrated like they did. After scoring a goal or making a shot, you pointed at your teammates, giving them credit, instead of running away from them and making it all about you.

Athletes are role models, whether they like it or not. Some embrace the responsibility and others spurn it. The bigger the star, the greater the influence.

The imitation extends beyond the games too. Athletes are emulated in how they present themselves, how they talk, and what they do in their everyday lives.

You may or may not have kids yet, but if you believe the sports world needs more Richard Shermans and less Sidney Crosbys, you’re saying you want our kids to idolize this new breed of athlete.

You’re saying when your 10 year old makes a great play and goes for handshakes after the game, you want him to slap their hands away and rub it in the opposition’s faces.

If you support Sherman’s actions, that’s what you’re saying.

Don’t get me wrong – I understand Sherman was emotional after making an incredible game-deciding play. He apologized on Monday:

“I apologize for attacking an individual and taking the attention away from the fantastic game by my teammates.”

He regretted taking attention away from his teammates, not the crude and ugly display of his character. He didn’t care about that.

This is bigger than sports. The world does not need more Richard Shermans setting examples like these – it needs more Rafael Nadals. Forget class – we need more role models who remember to act like decent human beings.