The colourful “Jump For Joy” photo project was erected in an Chinatown alleyway, uplifting locals and tourists with 200 pictures of people jumping for joy. Those passing by were captured by its positive energy, and it soon became a trend to pose jumping for joy in picture in front of the mural.

The photo project was planned to remain up for a year, but on April 30 — without warning — it was taken down. Baker said she happened to be walking by when she caught the mural being torn down.

Fans and followers were quick to show support, encouraging Baker to work on a new project, which pushed her to launch an Indiegogo campaign for a mural in a new location, that is planned to be twice the size of the original.

“It was really sad to see it go, but now I’m seeing such an amazing opportunity come out of it that it feels kind of right in a sense,” she said.

The new mural will be on an 18,000 square foot wall on the Corner of Abbott and West Pender streets. The location is far more prominent than its previous one, as it is visible to all people driving down Pender Street. 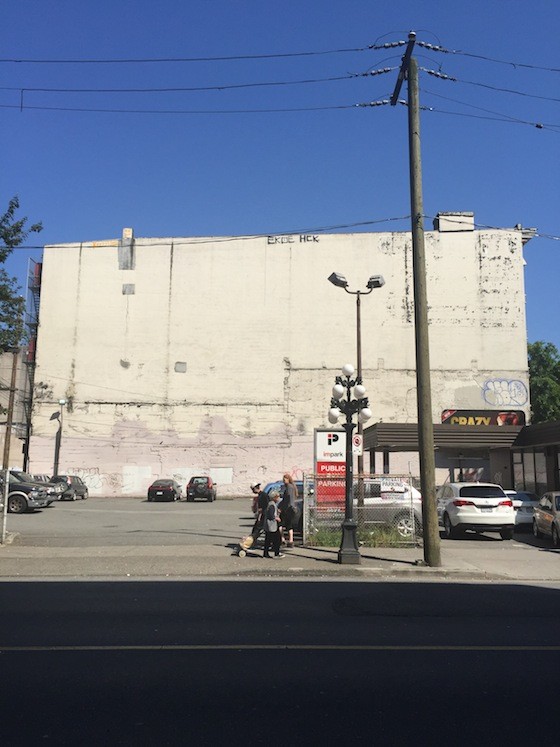 Baker said she planned her new project near the Downtown Eastside because its a neighbourhood that can best benefit from the piece’s positive energy.

The wall that is designated for the mural belongs to the Acro Hotel, a BC Housing single-room occupancy space. Atira Women’s Recourse Society, the owner of the building, joined forces with Baker in the project by putting its full support behind the idea.

“The neighbourhood doesn’t have a great reputation, but my experience being there was so positive, all the people that some are maybe afraid of were the ones that were my biggest supporters and helped me by getting involved,” said Baker.

Many locals who are supported by Atira are also currently on board with the project, whether it’s taking a picture of the mural or volunteering to install the art work. Baker also wishes others will volunteer to help install the piece so that the community piece will built from people all over the city.

But due to financial costs, the project is what Baker calls an “all or nothing option.”

As it is a community-driven art piece, various amounts of donations made to the campaign on Indigogo have a reward ranging from a hand-written thank you note to a group jump photo shoot that will go up on the mural.

“When you see the photos up there, you don’t know who they are and what they’re doing specifically. But you feel the energy, the joy, and you feel that everyone is in this together.”