Rogue One: A Star Wars Story knows how to do it right. It provides enough nostalgic foreplay followed by some wham bam moments that leads to a full intergalactic nerdgasm. It doesn’t even need to buy you dinner.

Here is a spoiler free review.

Originally, all I wanted to write down was “It’s good. Go and see it.” I felt that was sufficient enough. However, my editor wanted me to add more “in-depth commentary” in order to convince Star Wars’ fanboys and girls to go and see a Star Wars film. Makes sense. 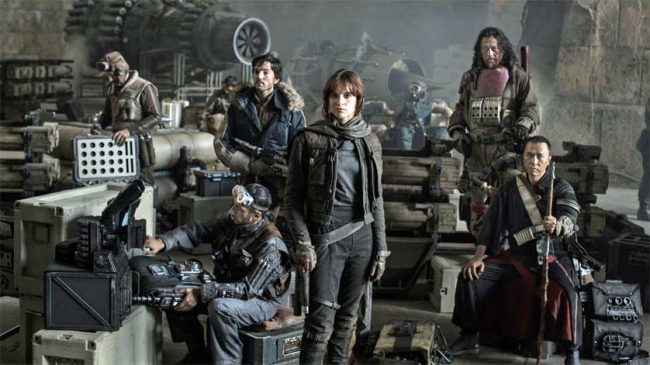 Full disclosure, I am an unapologetic Star Wars “fanman.” Now, If you don’t have the same appreciation for my science fiction addiction and are proud of that fact, or you are one of those annoying people that feel the need to tell everyone that you have never seen a single Star Wars film, stop reading and go play in the snow. Take off eh. The kids are talking.

I can’t really give too many details on the story. If you have watched the trailers, or have done some reading, you already have an idea. The brief synopsis is as follows (again spoiler free) the Rebellion cooks up a mission to try and steal the plans to the Empires’ new killing machine, the iconic Death Star. There. That’s all I’m going to tell you. This is the film that leads us into Star Wars Episode 4: A New Hope. And yes, you need to have watched the Holy Trilogy to fully enjoy every nuance.

Most of all, you need to go into this film blind and avoid the ignorant reviews from people who hate life. Trust me, Rogue One is an absolute joy to watch. Imagine that, going to see a movie for fun? Who does that? 2016 has been a downer year and so people need this escapism more than ever. 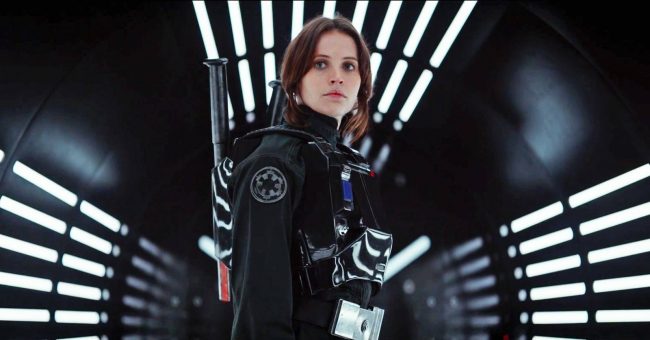 From the very beginning, this film stands out with some amazing cinematography and CGI that immediately immerses you into the galaxy far, far away. God, it looks gorgeous on a massive screen!

We are taken to new planets, introduced to new characters and reacquainted with old friends and foes. There are some very pleasant surprises in this movie that will make you smile and cheer. Again if you have never watched a single Star Wars film you will miss out on the details and not have the same appreciation. Oh and for the Trump supporters that are protesting this film, I can see why because it’s essentially a biopic. 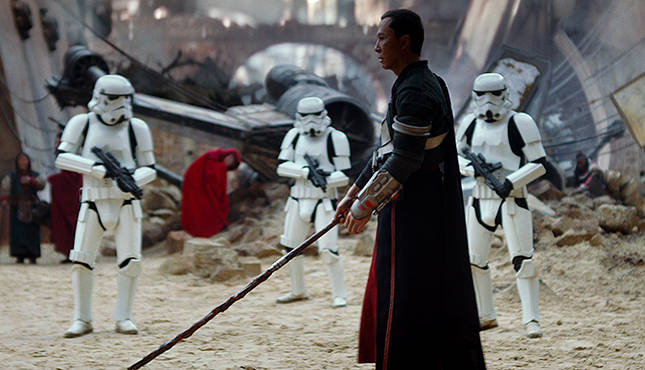 Although the characters in this film could be considered somewhat wooden, it’s kind of what is expected in this franchise. Nobody is going to get Oscar consideration for their performances here. However, you won’t even care because they’re great enough and you are sitting in your seat for the spectacle. If you wanted acting brilliance go and see Manchester by The Sea (Now in theatres) or La La Land (Dec.25th). Both are terrific by the way.

But that doesn’t mean there aren’t some standouts. Alan Tudyk plays a wisecracking droid named K-250 who practically steals the film with his dry wit. Ben Mendelsohn is fabulous as the evil Imperial military director Orson Krennic and any American film that incorporates the great Donnie Yen gets big thumbs up from me.

Felicity Jones is pretty good too, but the script prevents her from being a truly sympathetic hero, which is really the only problem I had with this movie. But character development be damned! Because the first half of the film is only there to set up the long and amazing battle scenes between the Rebels and the Empire. Yes, this is a full-on epic war film with nonstop action and excitement and it doesn’t try to be anything else. Instead of Jedi lightsabers we get lots of blasters, X-Wings, Y-Wings, AT-ATs and more…

This is the Star Wars film that nerds like me have been waiting for. Gareth Edwards knows how to manipulate us with nostalgic hits and fast-paced action. He is strong in the force. It also tips its hat in the direction of the late, great Japanese filmmaker Akira Kurosawa whose 1958’s The Hidden Fortress was George Lucas’s biggest influence when he created the iconic franchise. Rogue One feels a bit like Kurosawa’s 1954 film Seven Samurai.

I am going to go one step further and say that Rogue One is a better film than Episode 7: A Force Awakens. There I said it. Not that there was anything wrong with Episode 7, but from a pure excitement stance, Rogue One was just a far more exhilarating joy ride. Sorry Rey. 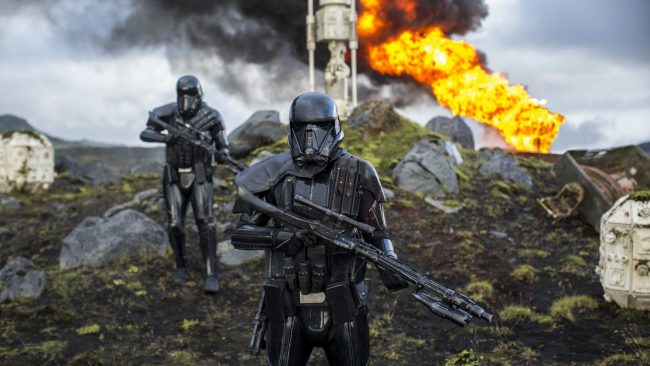 This film can be enjoyed with your kids, but maybe not your really young kids. There are some dark scenes and some scary parts for the very young. But it’s 2 hours and 20 minutes of PG-13 action. So, somewhat safe.

Bring on Episode 8 next year, and more Disney Star Wars projects the following years after! This franchise is in good hands and I can get behind this annual no guilt whatsoever pleasure. So, now that I have beefed up this review with words that really didn’t need to be written.

Rogue One: A Star Wars Story is good. Go and see it.

This easily gets 5 intergalactic pieces of buttery popcorn out of 5. Now excuse me, while I  go and see it again.

Playing at a theatre and IMAX theatre near you. Rated PG-13, 133 minutes