If there is one hurdle that could make or break the City of Vancouver’s planned bike share program, it is the province’s road safety laws that requires all cyclists to wear a helmet while riding on the road. It should be no surprise then that city officials are focused on finding a solution that gives bike share cyclists quick and easy access to helmets. According to a recent Metro News report, the City has paid $50,000 to Richmond-based SandVault Group Global Solutions Corp. to build a prototype of a reusable bike share helmet dispensing vending machine.

Each public bike share station will be equipped with a solar-powered helmet dispensing machine, with each machine capable of dispensing up to 20 helmets. The prototype machine is said to be easy to use just like any vending machine and will allow bike share cyclists the ability to select the size and style of their helmet. It is not known whether the Richmond-based company will be contracted as the provider of the machines.

Like the bikes, the helmets can also be returned to the dispensing machines of any bike share station. Maintenance crews will pick-up the helmets for sanitization and safety checks before allowing for re-use. Radio-frequency identification tags will be outfitted into each helmet to track the gear’s location and ensure each helmet has gone through this cleaning and safety check process before returning to distribution.

Public bike share programs have been highly successful in cities where there are no compulsory helmet laws (namely in Europe). Where such laws exist, these systems have largely failed to immense extents.

Montreal’s bike sharing system was launched in May 2009 with 3,000 bicycles and 300 stations. Unlike Vancouver, but similar to European cities, helmets are not required for riding a bike in Montreal. By the end of its first six months, the Montreal system marked its one-millionth ride and was considered a great success.

Municipal officials here in Vancouver hope to avoid the same struggles of the bike share systems in several Australian cities where similar helmet laws exist. Melbourne and Brisbane’s bike share programs have failed to gain traction, attracting just a small fraction of their original user estimates. The helmet requirement takes away the ability for the spontaneous usage of bike share, thereby reducing bike share user numbers greatly. Not everyone carries a helmet nor desires to wear one even if it is easily accessible.

When Melbourne officials first implemented the city’s $5.5-million bike share system, no helmets were supplied to riders at first. They were forced to buy one at nearby shops or bring their own. To address the issue of poor helmet accessibility and convenience as part of their attempts to raise bike share user numbers, officials came up with an idea for a helmet vending machine solution.

Where Melbourne’s bike share helmet dispensing system differs with Vancouver’s is that the helmets in the Australian city are disposable. Users pay only $5.00 for a helmet they can keep, meaning the government massively subsidizes the real cost of each helmet to a very great extent. If cyclists choose to return their helmet, they are given a $3.00 refund and helmets are sanitized for reuse. While user numbers have improved since the introduction of helmet vending machines, Melbourne’s bike share user performance still remains poor.

Under Mayor Gregor Robertson’s watch, the City of Vancouver has invested extensive resources into introducing new cycling infrastructure to the city. Last December’s approval to build a $5.5-million bike lane through the West End on Comox-Hemelcken comes as the municipal government’s latest bike lane investment.

The most significant addition to the city’s cycling infrastructure will be the public bike sharing system, which will be launched with an initial 1,500 public bikes and 125 automatic bike vending stations located throughout the Downtown Vancouver peninsula and the Broadway corridor. The entire sharing system, including the helmet vending machines at each bike station, will cost $1.9-million to operate per year. It is not exactly known when the bike share system will open, the launch date has been delayed over several occasions.

Cycling is generally a mode of transport for very short distances, it is a spur-of-the-moment means of travel in many European and Chinese cities (just like walking). It is also why bike share stations must be located everywhere in urban areas, sometimes as close as every other intersection, for assured convenience and close proximity to the rider’s final destination.

Whether Vancouver has learned and effectively addressed the failures of Melbourne and Brisbane is the true test (short of successfully lobbying the provincial government to reverse the law on requiring cyclists to wear helmets). Cycling is not attractive as an long-distance, cross-town means of transport for the vast majority of the populace, but there is certainly room for improvement for cycling’s role in short-distance trips: if implemented correctly, a public bike share system has the potential to greatly increase the utility of Vancouver’s expensive and highly contested new bike lane infrastructure.

How likely are you to use a public bike sharing system that requires you to wear a helmet? Are bike share helmet dispensing vending machines the “fix” to the problematic helmet law? Let us know by commenting below. 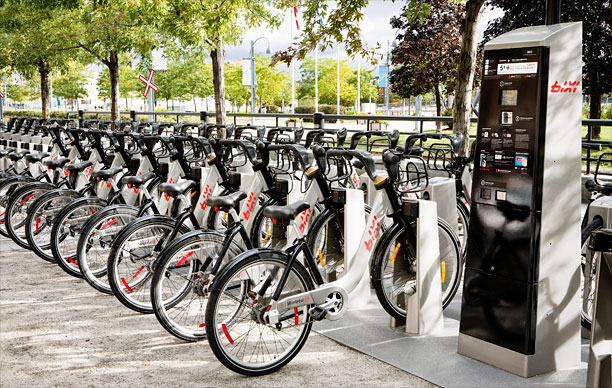