Wildfire season has come early this year and hit the province hard. Simply put, British Columbia is burning. A total of 178 active fires are blazing across the province, with 57 fires started just over the last two days.

But are we equipped to counter the ever-growing number of wildfires? A change.org petition says more action needs to be taken to protect B.C. from fires.

Kathi Donovan, a Port Alberni resident, is calling for the provincial government to contract the Martin Mars water bombers that once patrolled the province.

Converted from a World War II aircraft, the Martin Mars planes have a 27,000-litre carrying capacity, making them the second-largest air tanker in the world. These aircrafts are designed to glide directly above wildfires to suppress them.

There are only two Martin Mars water bombers left in the world, and they currently sit in Port Alberni unused.

“They are the best, most efficient and cheapest way to get the most water on a fire in the shortest amount of time,” reads the petition.

With over 15,500 signatures, Donovan hopes to put into work the two last Martin Mars water bombers that sit in Port Alberni.

For 53 years, these water bombers flew over the province to combat wildfires with firefighters. They were converted and put into operation under Coulson Group in Port Alberni, and were deployed by the province between 2007 to 2013.

But in 2013, the provincial government terminated its deal with Coulson Group, due to contract complications, logistical problems and maintenance costs amongst other reasons. The Martin Mars is unable to drop long-term fire retardant, and can only land on 113 bodies of water.

The B.C. government previously attempted to get the aircraft on board with an “as when needed” contract, but Coulson Group declined as it was operating primarily in the United States. 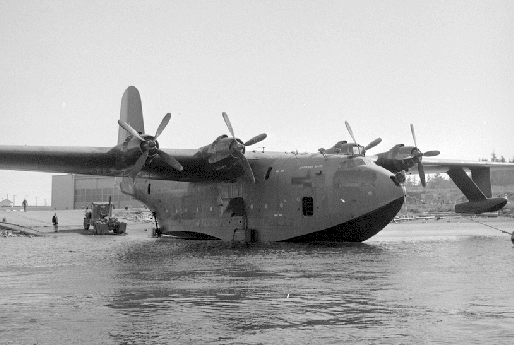 A Martin Mars water bomber preparing to be deployed. Image: BC Archives

Instead, the province acquired four “Fire Boss” airtankers, in hopes that they would be easier to deploy to more wildfires.

When Vancity Buzz contacted Wayne Coulson, chief executive officer of Coulson Group, he said that he would be willing to deploy the Martin Mars if the province asked him.

“We would in a heartbeat,” he said.

However, the provincial government has not been active in participating with the Coulson Group over the matter.

“We’re not going to take shortcuts, and that’s why you have to tell us now, because there’s a lot of training that needs to take place,” he said. “The expectation is, people think we could just jump in planes and go fight [a] firewall.”

Coulson explained that doing so would currently be against the law.

“First thing is, it’s illegal. We can only go on a fire if we’re asked. I know it’s frustrating from a taxpayer’s perspective, but we would go to jail for that.”

The current plans for the two Martin Mars planes is to retire one aircraft and send it to a museum in Florida. The remaining aircraft will be used by a test pilot delegation, but not for wildfire fighting purposes.

The number and size of wildfires continues to grow across the province. A wildfire at Boulder Creek, 24 km northwest of Pemberton is now 29,700 acres in size — the area of the City of Vancouver. Another wildfire in the Elaho Valley, further up north, has scorched an area of 49,400 acres. Both blazes are zero per cent contained.

On the South Coast, air quality advisories continue for Metro Vancouver as smoke from these fires have engulfed the region.

Metro Vancouver Regional District and Environment Canada are advising people to stay indoors due to the high concentration of particulate matter in the air.