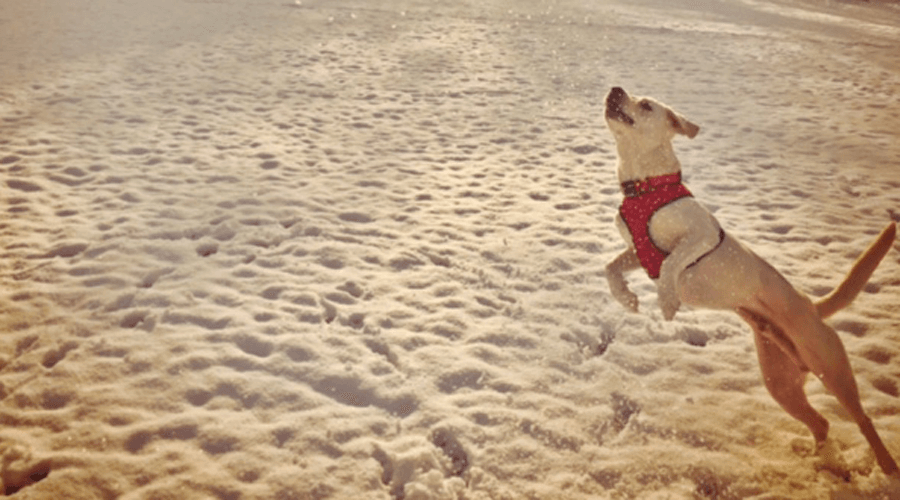 In the four months since being adopted, Striker has destroyed the following: a pair of running shoes, quilt, television remote, hockey gear, recycling bins and even his own collar. But his very patient new family is far from angry.

“He is very sneaky and stubborn and we wouldn’t have it any other way,” says Amelie Deyaeger.

It’s entirely possible the Golden Labrador cross didn’t learn his manners as a puppy. Though little is known about his puppy days, he was slated for euthanization after somehow ending up in a California shelter. His luck changed when he was brought to Vancouver as part of a mass adoption event at YVR in November with the group Thank Dog I Am Out.

Amelie drove eight hours from Quesnel to Richmond meet Striker after applying for the event online.

The journey to the adoption was both physically and emotionally long one for Amelie and her husband.

They had a dog they adored, a Golden Retriever named Copper, that they loved dearly. But shortly after turning 11, she was so sick her lung collapsed. That’s when vets discovered three tumors she could not recover from. The last weeks of their senior dog’s life were painful, and on November 2, 2015, they made the choice to “take her pain away and send her to dog heaven.”

“Many people told us to rip the bandaid and get another dog right away, but our hearts were not ready,” she says.

It took them a year to start looking for another dog, and that’s when they found Thank Dog I Am Out.

In this edition of Rescue Me, Amelie describes in her own words why she chose a long-distance adoption after the death of her longtime dog. 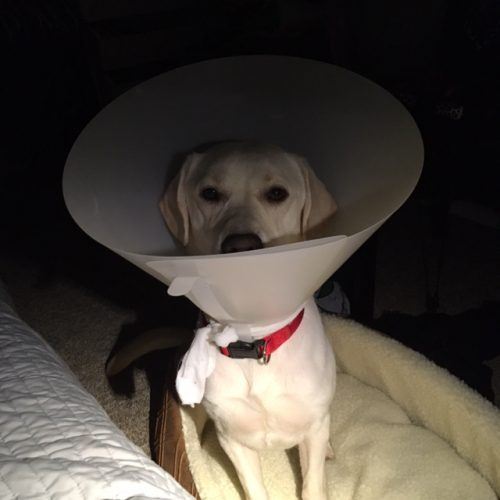 We wanted to have a rescue dog and skip the puppy years. We looked endlessly in our area, but dogs are sent right away to Vancouver and the Lower Mainland as they get adopted much faster there. All the places we applied to wanted a home inspection and refused to consider out of town people.

A coworker of mine knew my struggle and is always on the lookout for dogs – she sent me the link to TDIAO. Within an hour, I had completed and sent in the application, and she told me that it didn’t matter if we were from out of town! Two weeks later, I was in Vancouver having the biggest stress sweat since my wedding waiting to go find my furry buddy at the YVR adoption event. 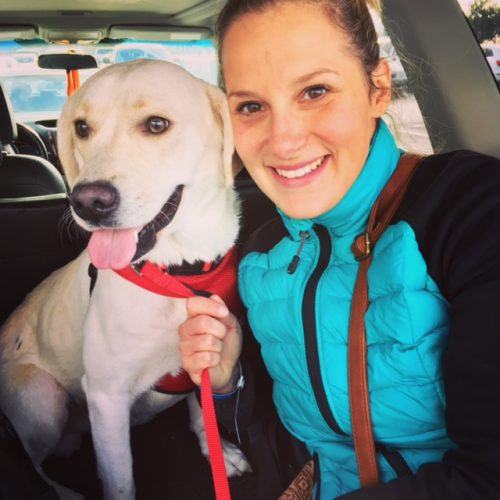 The whole process of the mass adoption event was overwhelming, emotional and amazing. By the time I arrived to some pens, there was a mountain of people around…so I never got to look at any dogs until I got to Sunny. He was alone in the pen. I kneeled down, crying, and he was so happy and loving, then I got invited inside the pen, and I sat down. He came to me right away and sat on my lap…call it what you want, that is what I did with Copper, and Sunny did it without prompting.

The volunteer in the pen with Sunny looked at me and I said I was taking him home. She took Sunny to me and we never looked back. He was amazing on the long journey back home, enjoying our pit stops here and there, and is glued to my side whenever he can! When I got home, my husband and son were just as in love with him as I was. It took us a short 20 minutes to find him a name that we all liked: Striker was now part of our family! We do not have a lot of history, but by the look of the information they were able to provide, our best guess is that he was surrendered. 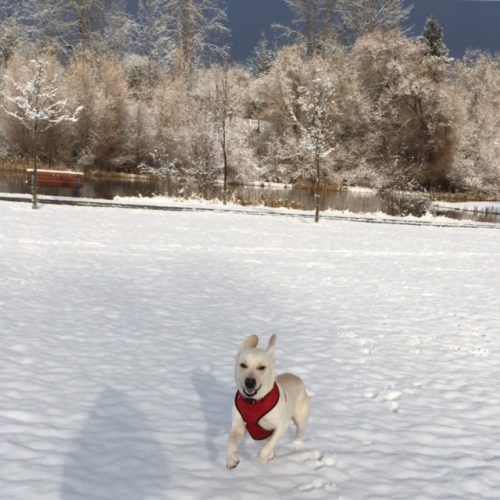 Striker is a golden Labrador crossed with… something. He could be cross Beagle, Greyhound or anything small. He is two years old, full grown, and weighs 40 pounds. He has gorgeous light brown/grey eyes. He is strong, fast and a non-stop licker.

He was full of energy from his first minute into the house. He is very cuddly, and loves to be on the couches and beds. He loves a good walk in the woods, meets other dogs all the time, loves a great tug of war with his toys and has a very unique way to show his excitement when food is served. He jumps and twirls around non-stop until his food bowl is on the ground. The biggest adjustment for him is definitely the climate. We are, unless it’s summertime, nothing like California. It’s cold and dry. Snow is still a mysterious thing to him but loves playing in it, chasing snowballs and eating it. 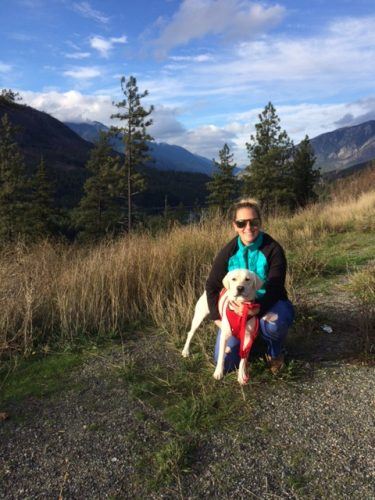 There are so many dogs looking for a loving home, waiting for a great chance at love, hugs, rubs and food. Why spend thousands of dollars on a specific dog breed that does not guarantee anything when you can support great organizations, give a dog a chance at a happy life and save some money? I don’t believe that you have to have the dog from his first day to feel like you won’t miss out on anything. Striker has been part of this family for just a few months now and the love I have received from him makes it feel like we have known each other for a lifetime already. 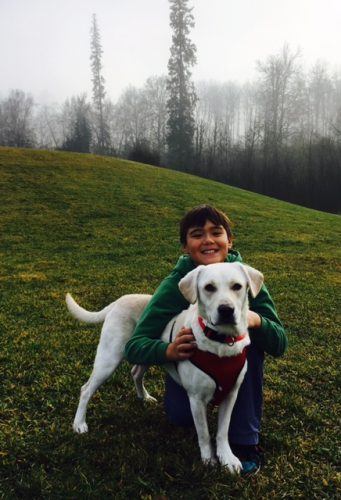 We are already looking forward to all the great adventures that we will have with Striker, coming along on my board for a paddle, going on hikes with us, all the camping we will do, the snowshoeing hikes and the swims in the lake – we live right at the door of nature.

Some days, Striker does things just the way Copper used to them, from a snuggle, kiss, look or the snoring. I know Copper would be happy that we have found another furry friend to call family. 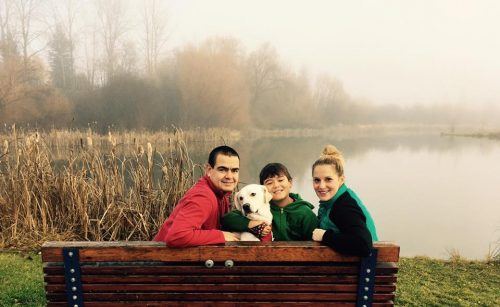 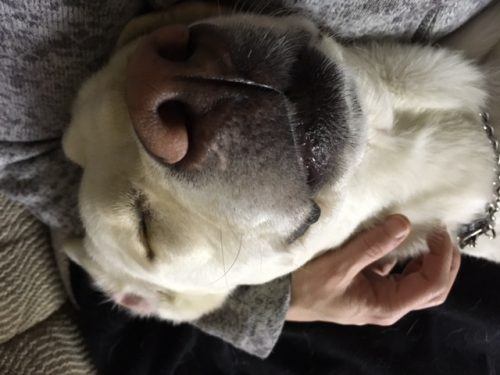