It’s just about lunch time on a wet weekday, and there’s a steady stream of hungry diners heading into the brand new West End location of reLiSH Gourmet Burgers. The New Brunswick-based chain has made a recent expansion push, opening locations in Edmonton, Vancouver, and shortly in North Vancouver and New Hampshire in the States.

Guests are greeted with enthusiasm by the staff behind the counter. The close-knit and small crew handily serves up the restaurants lineup of signature gourmet burgers and simple sides, with every order a chance to draw the community into the congenial world of reLiSH.

Also behind the counter is Timothy Tejuco. The Vancouver native was brought into the reLiSH fold to implement the chain’s westward and U.S. expansion–his first day on the job was his flight to Edmonton to get that location up and running. Tejuco came to reLiSH thanks to the company’s Fredricton-based Culinary Director, Chef Ray Henry. Henry, who grew up just south of Vancouver in Tsawwassen, first came to know Tejuco when the latter came on board in the kitchen of Diva at the Met, where Henry served as Executive Chef in the mid-aughts. 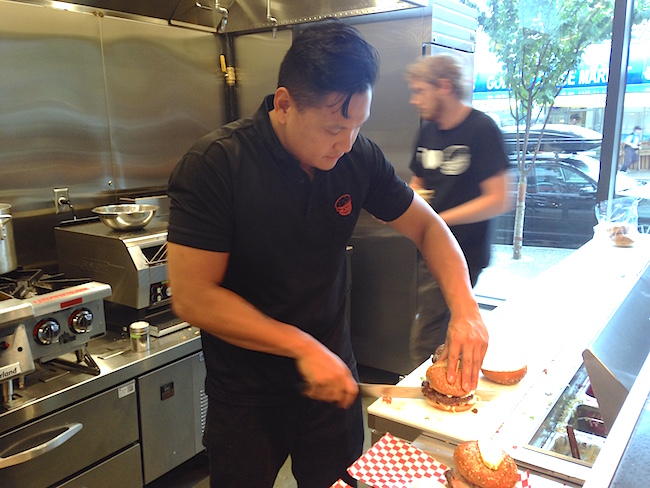 Tejuco, who went on to hone his culinary biz chops on at JOEY before moving on to high-end catering company Savoury Chef Foods, shares a background of French classical training with Henry; both have an understanding of both technique and the art of layering flavours in foods.

It may seem a bit incongruous to talk about “layering flavours” and a burger chain, but Tejuco is quick to point out that it’s his mission to prove that a reLiSH burger is “not a greasy spoon cheeseburger.”

Tejuco says that this Canadian-born burger chain endeavours to be on par with globally-recognized restaurants like Shake Shack and In-N-Out. He explains that the way they make good on the promise of putting “gourmet” in their restaurants’ name is by ensuring that at least 60 percent of what they serve is made fresh on site. That includes their never-frozen beef burger patties, and their signature signature garlic mayo and beet relish.

At the heart of the reLiSH menu is The Simpleton burger. It serves as the foundation for all of their other burgers, so you’ll find the garlic mayo and beet relish, shredded lettuce and sliced tomato on all their burgers. Each location offers a set of nine core burgers, along with one exclusive to the location, as well as monthly specials.

The location exclusives play in name and flavour on the culture of the local community. Burger fans in Vancouver will find the Italian Stallion at the Commercial Drive outpost, and The Odyssey in the West End; the former plays on the Italian heritage of The Drive, and the latter is a nod in name to the old night club and in ingredients to the city’s Asian population with its pickled red cabbage, spicy miso Sriracha glaze, and fried egg.

Tejuco is spending this particular day refining his recipe for what will ultimately become the exclusive burger available at the forthcoming North Vancouver location. Moving from the handwriting phase in his trusty notebook to the prep counter, Tejuco begins by hand-mixing lamb sausage, then combining ingredients for the feta dill spread, pausing to make minor tweaks to the recipe after tasting. He then chops up char-roasted tomatoes, and then moves to the grill to produce a couple of Simpleton burgers–one for me to taste-drive, and the second to serve as the canvas for this Persian-inspired prototype.

The Simpleton is a study in the symphonic effect of the sum of its parts. The garlic mayo is subtly sweet, the beet relish appropriately tangy and textured, and when applied to a burger showcasing a fluffy seeded bun and a juicy beef patty, the result is a very satisfying burger with complementary flavours.

“I can never have a burger anywhere else now,” confesses Tejuco, who also says that he’s down to about one burger a week–a drastic reduction from his initial immersive intake of at least a burger a day. 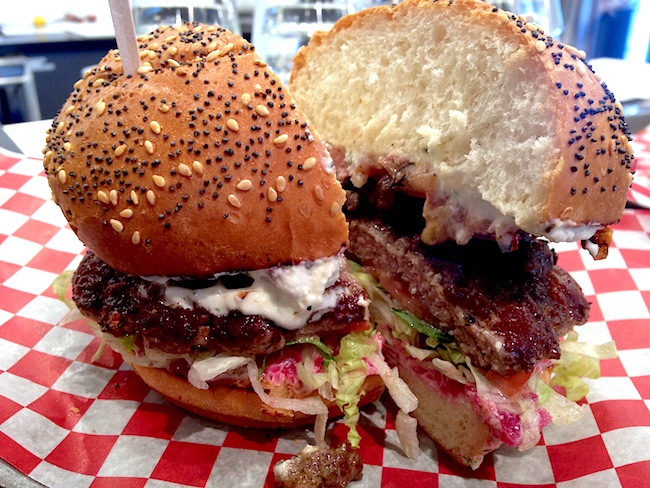 Once the test burger is assembled, Tejuco brings it over for our official tasting. He’s on the fence about the tomato–it needs something more to make it more of a vibrant “salsa”-style topping–and the sausage crumbles may need some tweaking, but on the whole, the flavours work nicely together, and take the burger to a next-level echelon.

“We want to nail it,” attests Tejuco of reLiSH’s commitment to getting their burgers just right. After all, for this chain, the burger is the centrepiece, and the sides take a back seat. Although you’ll get a hefty portion of their thick-cut fries in an order, or can get them loaded up in a poutine, it’s not about the combo at reLiSH.

Where the combo counts is on the burger itself, and in the restaurant staff. Tejuco gestures for his colleague Wes O’Hara to come over and take a taste. O’Hara relocated to Vancouver from the east coast to serve as the company’s west coast liaison, and has been with reLiSH for several years. He speaks to the willingness of the staff to accommodate special requests from regular customers, while Tejuco remarks on just what makes a reLiSH crew special.

“We cherish individuality,” says Tejco of the company’s core staffing philosophy. While at reLiSH they do indeed “preach the welcome”–the boisterous greeting we all get at the front door–Tejuco says they take great pride in hiring a diverse staff who reflect their communities. How often can a burger joint bring on a staff who get “paid to be weird,” he posits. “We want to be different, we want to stand out,” Tejuco adds.

Tejuco, O’Hara, and I polish off our pieces of the prototype burger, and I chomp on my last french fry. It’s back to the lunch crowd for O’Hara, back to the office for, me, and back to his notebook and prep counter for Tejuco as he plans his next attempt at his new signature burger.

“All in a day’s work, making burgers for a living,” he adds with a smile.