Redfish Kids co-owner Lorraine Kitsos is a firm believer in the power of a piece of clothing to make a lasting imprint on childhood. Kitsos, along with co-owner Kristy Brinkley, launched their clothing brand a decade ago, with an aim to create durable, memorable, and beautiful children’s wear with heart.

Kitsos has strong memories from her girlhood of clothing, like a very fashion-forward faux fur coat she treasured, and the sense of autonomy she felt assembling her outfit in the morning under her father’s supervision, after her mom had already headed off to work. 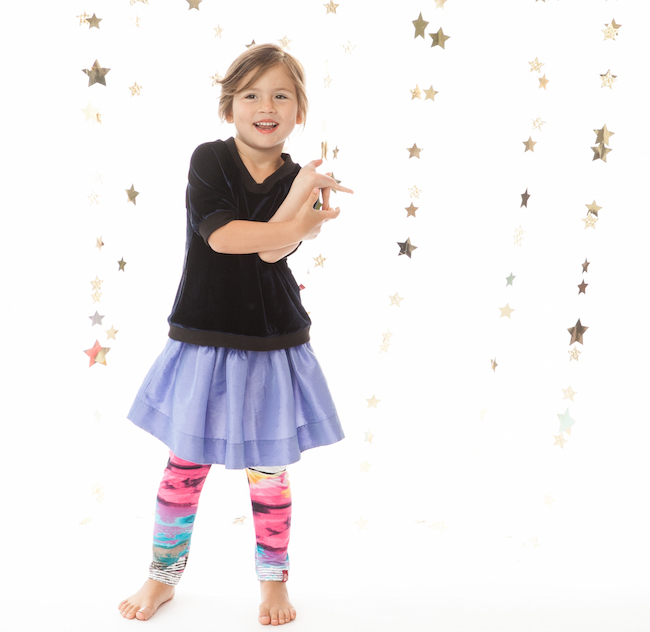 When it comes to how Redfish Kids meets their consumers’ needs, Kitsos explains that one way is that they use primarily organic materials–much easier to find locally than it was a decade ago–and that since they are 100 percent made in Vancouver, they don’t need to spray any chemicals on the clothing, as mainstream clothing companies often do to guard against damage when shipping overseas.

But durability and wearability are key. For parents this means material that holds up for repeated launderings, and for kids this means movability for all the playground sliding and climbing that’s part of childhood.

“I think it’s important for kids to be kids, and for them to move like they’re kids,” remarks Kitsos. “Clothes should not restrict in any way shape or form. They’ve got to be able to breathe, sweat, move. Even the dresses are cut so the kids can be free,” she adds. 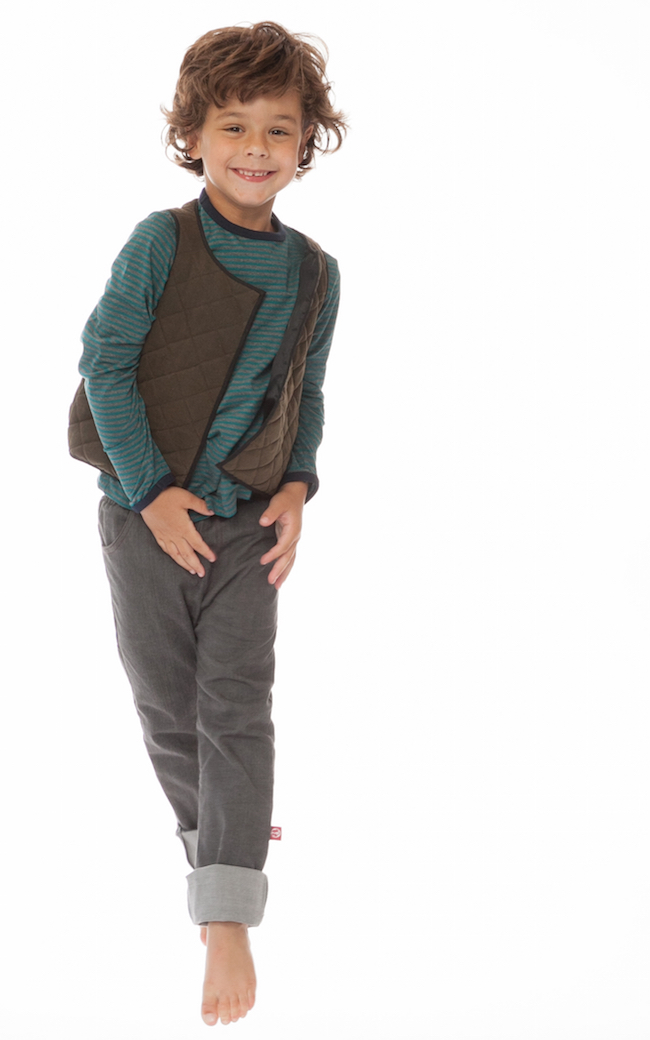 On top of that, Kitsos says what she and Brinkley and her customers strive for is for kids to dress like real kids. True, they’ll be quite stylish kids, but kids nonetheless.

“It’s got to make sense,” Kitsos points out. “What kids want to wear is their favourite shirt or pants.” But then certain design elements are part of what makes sense. “All of the waistbands are elastic,” notes Kitsos, with a nod to the milestone of potty-training, and all the pants have big cuffs so that as the legs get longer, so do the pants. Alternatively, some of the pants end up working great as capris or shorts, and many little girls hold onto beloved dresses and wear them as shirts.

Kitsos says that it’s pretty common for the young wearers of Redfish to hang onto an item for three or more years–definitely not something that’s common among the big box store kids’ brands. 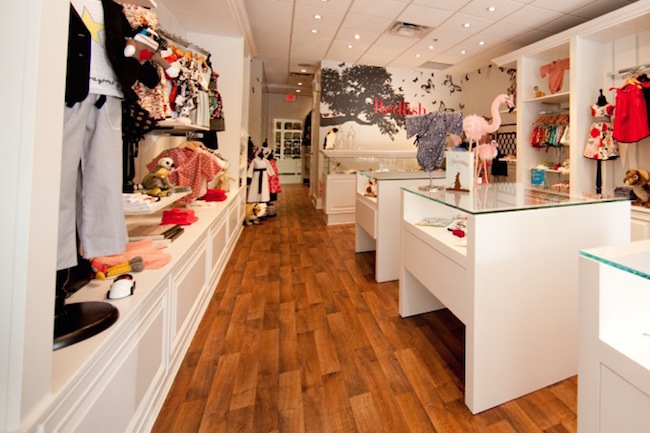 Creativity, of course, comes into play in the Redfish designs. Inspired initially by street fashion in cities like Tokyo and New York, Kitsos says there has been some evolution in the Redfish aesthetic. However, the brand has been, and remains, known for their bold use of patterns, and mixing and matching those patterns, as well as a bit of what might get called gender-bending mixing of pieces.

“I think 10 years ago I got a lot more flack,” Kitsos says of her fondness of putting a hoodie with a girls’ dress, and other unexpected combos, “but now we’re seeing it done in fashion. I was really was inspired to create a line that didn’t dictate how you look, but it stimulated creativity…there’s not one way to see it or play it.”

Some items are true Redfish staples (and there is even a local Facebook group for collectors), and Kitsos promises those items, those “building blocks” of the Redfish brand, will endure as their foundation. And of course, they’ll continue to use the vibrant and eye-catching patterns they’re also known for. “The most response we get from people are the bright florals, deep colours, geometrics,” elaborates Kitsos.

While the self-taught designer is able to work new pieces into the Redfish collections–they put out large collections for Spring and Back to School, smaller ones for holiday and summer, and are able to float in pieces all year thanks to being small and local–and keep things fresh, a prime example of a Redfish cornerstone piece is what’s known as the “Eat Pray Love” dress.

The black and white swing dress was part of a collection being sold in stores in Canada and the U.S. before Redfish had its current Hornby Street Vancouver storefront, and managed to make its way into a scene at the start of the 2010 Julia Roberts film “Eat Pray Love.” 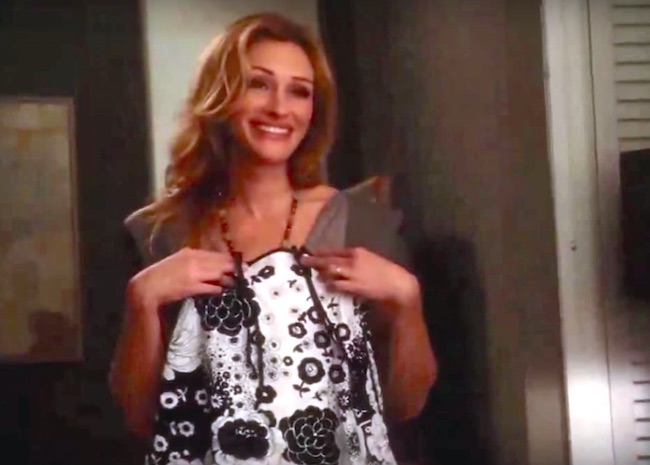 Having heard their dress made a cameo, Kitsos and Brinkley headed to the movie theatre at the tail end of an exhausting Los Angeles trip, and sure enough spotted Roberts lifting the piece out of a hope chest early in the flick. Their excited shouts were enough to warrant a stern shush-ing from a theatre usher, and, needless to say, Kitsos and Brinkley have ensured they still make that dress and have plenty of that fabric on hand.

Fast forward to 2015, and Redfish is marking their tenth year in business. Their shop, which is also a haven for parents and gift-shoppers, offers not only Redfish Kids clothes, but carefully curated pieces of clothing from other lines, as well as thoughtful and special toys, books, and accessories–all aiming to be more one-of-a-kind than run-of-the-mill.

Kitsos says at Redfish they also like to see to it shoppers are well-cared for. “Our customers have to be like 110% happy,” says Kitsos with a broad smile. She says they want customers to bring back clothes that kids don’t like, or that don’t hold up. They’re happy to make repairs, and also to ensure there are no issues that they need to address on the manufacturing end. Ultimately, attests Kitsos, they actually get very few returns, but that’s simple their mandate as a small business.Z

“It’s ten years now,” reflects Kitsos on the Redfish journey. “We were hard to find at first, but people who have found us early on are really loyal.”

But it all comes back to creating connection: “We’re a brand filled with heart,” says Kitsos.