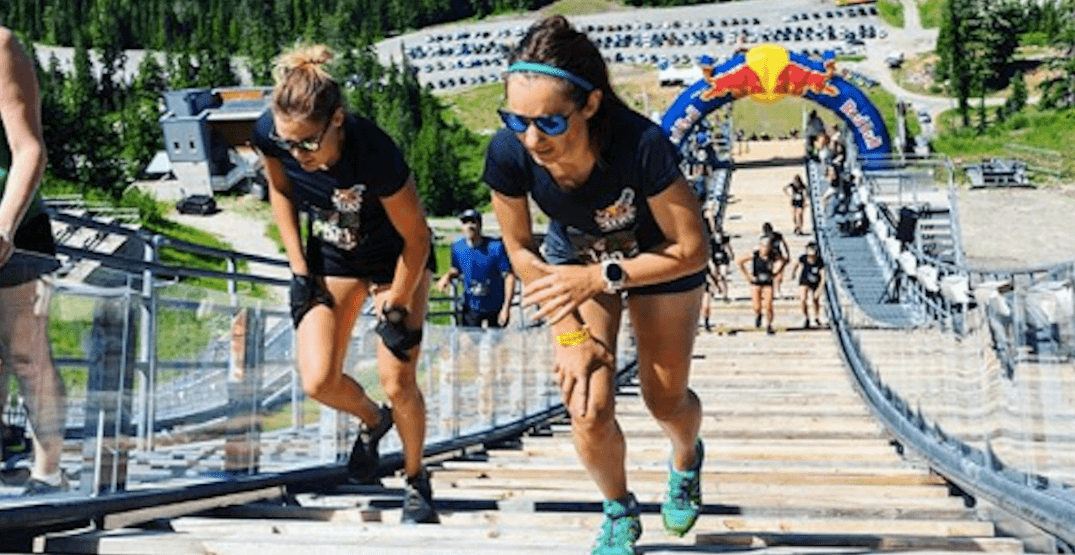 It’s been dubbed the “toughest 400-metre race in the world,” and this past weekend, it was a UBC student that stood on top of the podium at the conclusion of this year’s Red Bull 400 race in Whistler.

On Saturday, hundreds of athletes beat the heat and descended upon on Whistler Olympic Park to race directly up a ski jump at a 35° incline to the finish line during the annual event.

And in the end, it was UBC student and track runner Kieran Lumb who took the top spot in the men’s division, crossing the finish line first and coming in with a time of 3 minutes and 54 seconds.

On the women’s side, it was event newcomer Robyn Mildren, who surprised the competition and took home the gold, with a time of 4 minutes and 45 seconds.

Mildren, a Ph.D student who trains at the Thunderbirds Track Club with Lumb, will travel to Austria with Lumb to compete and represent Canada in the Red Bull 400 World Finals.

Other highlights of the day included BC-native, who – five years after a paralyzing ski injury – ran the race and made it all the way to the top.

There was also Owen Owens, a 93-year-old local Peak to Valley ski legend who as greeted with applause as he led the relay race with his three high-profile teammates, Jay DeMerit, Ashleigh McIver, and Rob Smith.

Hey @redbullcanada! Thanks for motivating us to get out for this incredible #RedBull400 event! Yes /- we did run up that ski jump… it would have just been sitting there all lonely and neglected all summer long if it weren’t for this global series of the world’s steepest 400m hillclimbs! . What an inspiration our eldest teammate, #OwenOwens is. Great idea getting him into the spotlight here—people need to know that healthy active living is possible well into your nineties, and the passion and spark to challenge yourself will never fade if you work to keep it within you!!! Push your limits. Always. More in my story! ❤ . . . . #exploremore #adventurouslife #getoutside #stayfit #stayhealthy #challengeyourself #whistlerlife #exploreBC #inspiration #motivation #whatspossible #RedBull