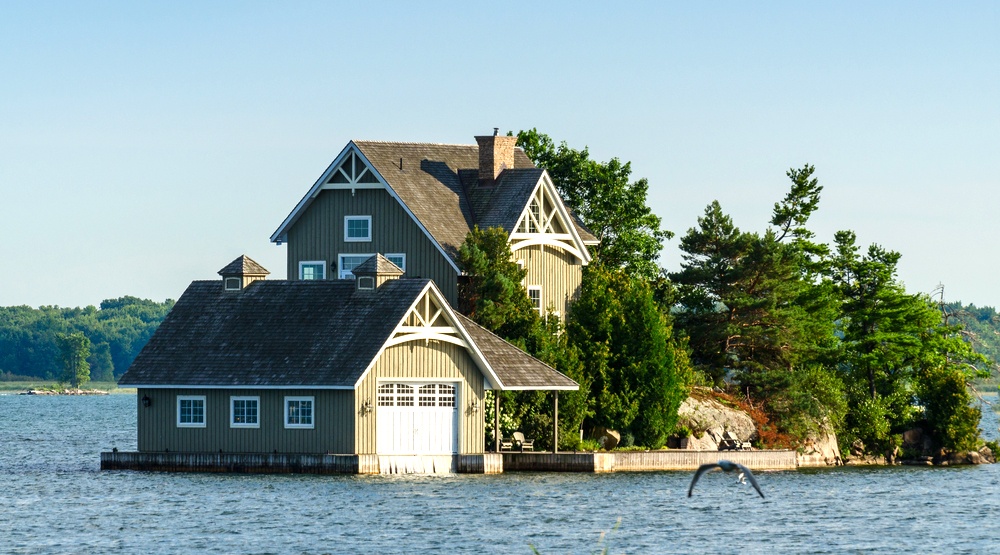 Luxury house on an island (LesPalenik/Shutterstock)

The recreational real estate market in BC is booming, as Vancouver homeowners cash out, according to the 2017 Royal LePage Canadian Recreational Housing Report.

The annual report compiles information from a cross-Canada survey of real estate advisors who specialize in recreational property sales.

Released today, the report shows most recreational property markets in the province saw prices and sales activity climb when compared to the same time last year.

The aggregate price is the average of the median prices for each property type: lakefront, riverfront, oceanfront, island, woods cottage/cabin and resort/condo.

Homeowners selling up for island life

According to Royal LePage, the rise in recreational property prices is due to the low inventory, and thus high price tag, of properties in Vancouver.

“Low inventory levels and the return of consumer confidence are driving prices up in many
recreational markets across the province,” said manager for Western Canada Jim Morris, in a release.

“We are back to where we were a year ago, seeing a significant increase in prices across all product types.”

Traditionally, Vancouver homeowners looking to cash out in search of a leisurely lifestyle would buy in the Okanagan and the Fraser Valley.

But that has pushed prices up even higher in those areas, so many Vancouver and even some Fraser Valley homeowners are looking further afield for recreational properties.

“Now, with the Fraser Valley feeling the heat, prospective purchasers are turning to the islands for relatively more affordable recreational properties, accelerating market demand within these regions,” said Morris.

Around Vancouver, the hottest recreational property locations include Denman Island, one of the Northern Gulf Islands in the northwest corner of the Georgia Strait.

“We have seen the trickle-down effect of homeowners selling in Vancouver and buying
recreational property in areas like Denman Island, causing a significant decrease in available supply this year,” said sales representative Sylvie Schroeder in a release.

“Younger families in particular are buying up local acreages in order to practice
sustainable farming, which is a fast-growing trend in our area.”

According to Royal LePage, on average, a lakefront property on Denman Island will set you back $548,000, while an oceanfront property will cost you $683,500.

On average an island property with restricted access there will cost $480,000. Even cheaper is a woodland cabin, at $393,000 on average.

Meanwhile, another Northern Gulf Island in demand is Hornby Island, located in the Salish Sea.

“The availability of recreational properties in the Hornby Island area has decreased significantly year-over-year as old inventory has been sold off and current owners are holding on to their properties as investments,” said sales representative Donna Tuele in a release.

“Hornby Island is a great place for families, and is a community that strongly supports
recreational activities, making the decision to stand pat an intriguing one to say the least.”

An oceanfront property on Hornby Island will cost on average $849,800. Or you could go for a bargain woodland cabin at an average of $375,000.

Meanwhile, the Sunshine Coast is also drawing people in, according to Royal LePage.

“Proximity and accessibility to the Mainland combined with relative affordability makes owning recreational property on the Sunshine Coast extremely attractive,” said sales
representative John D. McKenzie in a release. “Sales activity and prices have both risen significantly since last year.”

On average, recreational property costs on the Sunshine Coast range from $450,000 for a woodland cabin, to $1,100,000 for an island property with restricted access.

So now you know where to cash out–if you ever get to cash in, that is.