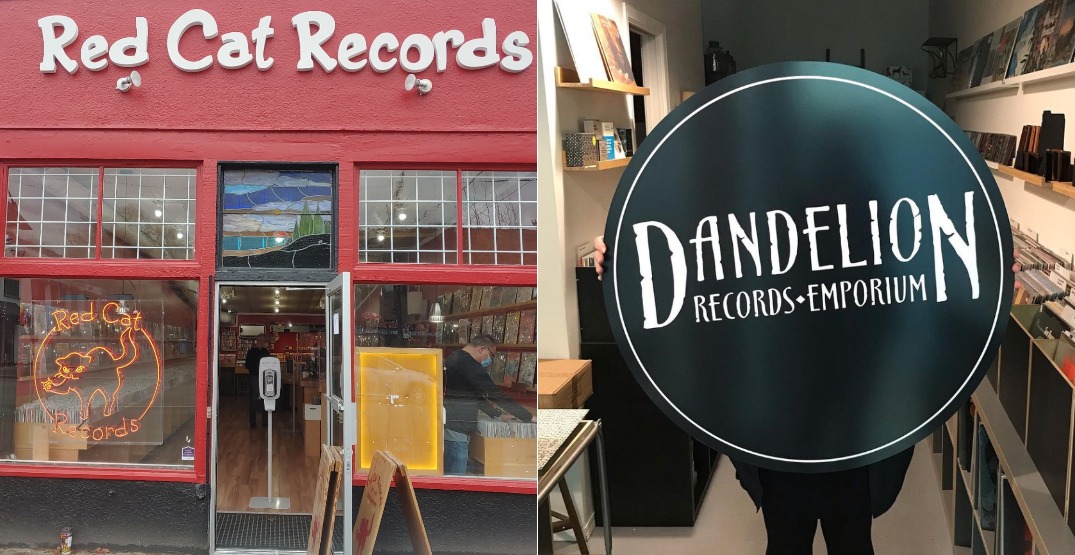 Vancouver music lovers, get hyped! Record Store Day is coming to the city on April 23, and vinyl vendors are getting some of their rarest materials together for the occasion.

They’re also offering exclusive deals, so bring your wallet — and your passion for terrific tunes — with you.

There are tons of great places to buy music in Vancouver, but we narrowed down our favourite local shops with special plans for Record Store Day (RSD) this year.

Premier of BC John Horgan even dropped by a local record store on Saturday.

I think I was searching for 54-40. #RecordStoreDay

Check out the Record Store Day Canada website to see which titles are dropping in advance.

The clientele at Red Cat Records ranges from old-school punks to hyperpop-loving teens and moms looking to replace their copy of Fleetwood Mac’s Rumours, so you know they’ll probably have what you need in stock.

Penny Buckner, a sales clerk at Red Cat Records, has been going to Record Store Day for years. They’re offering 10% off all weekend for everything in the store except Record Store Day titles.

“We usually have a lineup out front for an hour or two,” she says.

“We just moved to a new location and it’s got more flow, so I think it’s going to be a little bit easier in the store to accommodate more people, because the last couple of years have been harder with COVID.”

This teensy record store is where you want to go for deep cuts, especially if you’re interested in local content. Narrow and nearly hidden, it’s often full of underground gems. Ask the staff what’s new, what’s from Vancouver, what’s popular, and what’s on their playlists. It might just land you your next favourite record!

They’ll be offering selected and limited-run RSD titles at the store.

“We have sales on select RSD titles and the entire second floor stuffed with records that are half price,” they told Daily Hive Vancouver in an email on April 21.

A go-to for any music aficionado in the city, the face of Neptoon Records is painted in an electrifying mint green. Although it’s one of a few music shops on Main, this little hideaway is hard to miss. Hop inside and reminisce about the days they used to play live music there for Record Store Day every year. RIP, live shows in tiny venues.

He’s looking forward to an album from a Japanese psych band from the 70s called Speed, Glue & Shinki.

“It’s getting its first authorized North American release, so I’m pretty excited about it,” he says.

He’s also looking forward to Joni Mitchell’s Blue sessions, which will offer alternative takes of the tracks off her classic album.

“I really wish this year was going to be the year we had bands back again, but I think we’re going to wait one more,” adds Frith.

A Gastown staple, Beat Street has been around for years. The owner has an absolutely enormous collection, so expect to spend some time there, and ask him for advice if you have any questions or concerns.

Nick Wisdom, who works there, says they have a ton of exclusive RSD releases — “everything they could get their hands on.”

There will also be snacks, drinks, and 10% off all used records in the store.

“We’ll let people come in a few at a time so that it’s not too much of a crazy frenzy, so that everyone gets some time to get what they need,” he says.

“We plan on having DJs in the future, once things are more normal [regarding COVID-19] … but for now, it’s just going to be the Beat Street crew playing music.”

They’ve got a huge used jazz collection available right now, so drop by if you like smooth listening.

In Kitsilano, Zulu Records has a large variety of older albums, local picks, and newer gems. They’ve been around for a long time, and it shows in the experience of their staff and diversity of their record rotation. Like other places on this list, there used to be performances in Zulu, and they’re hopeful those days will come again.

Grant McDonagh, owner of Zulu, says they ordered “quite a lot” for RSD this year. He was amazed by the sheer quantity of records they got.

“Could be David Bowie, could be the Cranberries, the Doors, Peter Tosh, Roy Ayers, the Lumineers, Iggy Pop — there’s a lot coming out, so yeah, we’re getting a lot of releases from some pretty named bands,” he says.

“We’ve supported a lot of Vancouver music, international music. We do the music for the Khatsahlano Street Party. We’re the ones who instigated that.”

They’re also offering 15% off thousands of new and used records in the store, including CDs and excluding RSD special releases.

Commercial Drive’s Audiopile is one of the lesser-known stores in Vancouver, but it deserves more credit. The place is tightly packed and narrow, but that’s because it’s crammed full of amazing titles. They have everything from classics to hot new drops and obscure content for niche listeners.

Mark Richardson, manager and buyer at Audiopile, says the store is selling RSD releases behind the shop “so that way people can queue up behind the store.”

“We started doing the back alley thing during COVID,” he says.

Richardson has been going to RSD events in Vancouver for a decade. This year, he’s excited for Albert Ayler’s box set and other rare jazz picks.

“We have a big, long alley and a back door to the store so we’ll set up at the back door with a table full of records for the RSD, and in the front of the shop, it’s 10% off everything,” he says.

“We just decided to separate the chaos of that from the store for the people who just want to shop and don’t really care about the Record Store Day stuff, just want a bit of a discount, or want to just visit a record store.”

That discount also applies to the music on their website.

This shop is at a brand new location, but they’re still honouring some of their classic traditions this Record Store Day.

Its owner, David Jones, says he’s “just stoked to be opening new location on RSD, [and] stoked to let everyone see the new set up!”

“Still have our vintage piano, so nice to have piano player performing like old times at 3 pm,” he said.

Visit to check out their fresh environment and vibe!

Daily Hive Vancouver has reached out to more local record stores for details about their deals and offerings and will update this article.