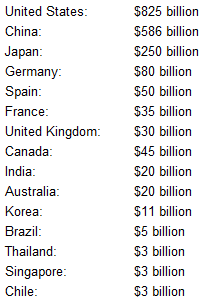 So What’s Been the Response?

In the face of the biggest economic crisis anyone living has ever faced, what is the appropriate response?

Well, in short, it’s been to throw money at the entire thing.

Why? Because Lord Keynes said so. John Maynard Keynes is the founder of the Keynesian economic theory, the school of economic thought that has dominated the western world for over a half-century. So, according to Keynesian economics, in the face of a depression a combination of the following two measures must be enacted:

Translation – STIMULUS PACKAGES – which, unless you’ve been hiding under a rock, has been the theme of 2009 so far. See economic theory DOES affect you.

So, yeah, this is what every government on the planet is doing. And how. Take a look at this list (top left).

This is misleading though as it doesn’t include the amounts of cash already spent to save the banks (ie the 750 billion TARP). The true numbers of world stimulus have never been seen before. And therein lies the rub. Some are arguing that in the stark terror of the chances of repeating the Great Depression, the Keynesian-style response has been way over the top.

The most notable objectors – Austrian School Economists. They have been considered somewhat the fringe of the economic world for well over a generation but have come to the fore as of late as they largely predicted this entire crisis. In a nutshell, the Austrian school absolutely abhors government involvement in the market citing that the price mechanism (the bid/ask of anything from a stock to any given commodity) and the human emotion that drives it is inherently too complex for any central government to hope to influence.

In respect to the massive stimulus’ themselves, the Austrian economists absolutely HATE it. They argue that inflation is always and everywhere an increase in the money supply. So when governments inject trillions worth of new money in the hopes of influencing economic growth, Austrians argue this places higher prices on assets (ie Housing), while the purchasing power of dollars decreases essentially impoverishing the consumer.

In turn, because of the loss of money’s purchasing power, the consumer must turn to credit to afford any assets he wishes to purchase, which eventually creates a credit bubble and volatile business cycle that, full circle, makes overall matters even worse.

So what do the Austrians say should be done? This (and it’s scary), let is all happen because in the long run it will cause people to save, prices will deflative thus and increasing the value of money, and the economy will emerge healthy on a fundamental basis. This is a scary proposition as it essentially guarantees another Great Depression, which the Austrians argue, we only have ourselves to blame after several decades of increasing inflation and conspicuous consumption.

Sound crazy? Yes. But watch this video. Peter Schiff is the foremost Austrian economist in the United States and his predictions which began in 2006 are, in a word, prophetic.

But do the people think? Well, let’s just ask them – the BBC has