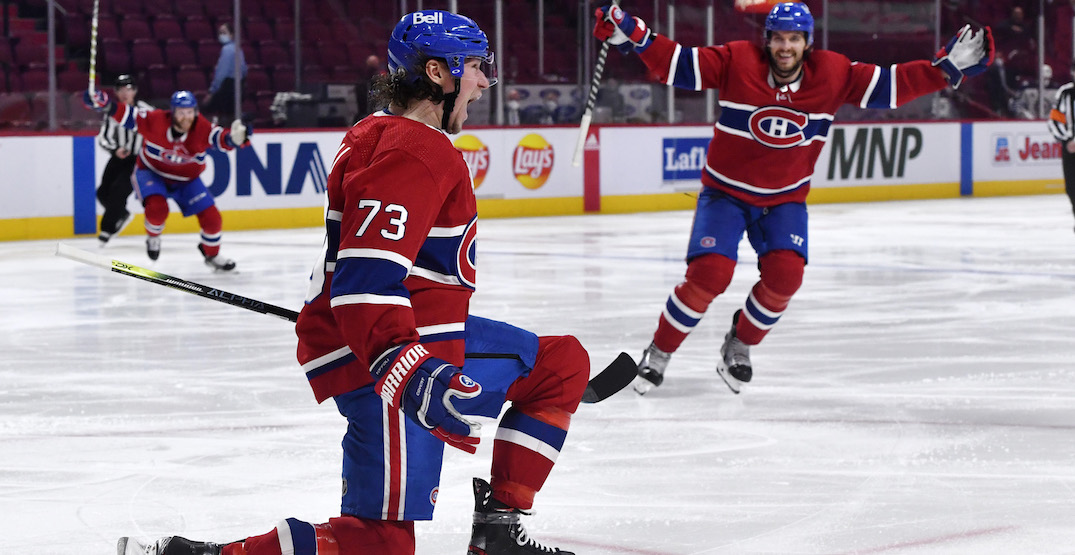 In case you haven’t heard, a Canadian NHL team hasn’t won the Stanley Cup since 1993.

Whether or not it’s because of a national drought that’s approaching three decades, a lot of people seem to have this idea that every year, everyone in Canada gets behind the last Canadian team left standing in the Stanley Cup Playoffs and roots for them to bring Lord Stanley back north of the border.

This year’s a bit different, though. As the NHL gets get to begin its Stanley Cup semi-final series, allow me to lay out the case for why you should follow the CN Tower’s lead and incorporate some bleu, blanc et rouge into your wardrobe and throw your support behind the Montreal Canadiens.

I’m going to assume that for the most part, trying to get Maple Leafs fans aboard the Canadiens bandwagon is a hopeless endeavour.

If you are a Leafs fan who’s open-minded about hopping on the Habs bandwagon, great! You’ll be welcomed with open arms. Just maybe skip past this section. I want to talk to the rest of Canada for a minute.

Come on. That Habs-Leafs series was pretty funny, wasn’t it?

At least if you’re a fan of any Canadian team other than Toronto. Because you probably don’t like the Leafs very much, do you?

In at least one sense, the Maple Leafs really are like the New York Yankees, Los Angeles Lakers, or Dallas Cowboys of the NHL. You may love them, you may hate them, but you probably have strong feelings about them one way or the other.

You hate the way their fans invade your team’s arena whenever they play there. If you live in Western Canada, you hate how you have to watch your team play the Leafs on a Saturday afternoon to accommodate the fans in Toronto. You hate how much national media coverage they receive.

Now, a lot of that may apply to the Habs for you, too, if perhaps on a slightly lesser scale. For a lot of you, that Montreal-Toronto series may have been a pick your poison situation.

But, be honest: When it came down to Game 7, you were rooting for the Canadiens, weren’t you? Even if you hate both teams, it was clear which team — and which fan base — a Game 7 loss was going to be more devastating for.

To paraphrase the 2012 LA Kings, “To everyone in Canada outside of Southern Ontario, you’re welcome.”

To everyone in Canada outside of BC, you're welcome.

Oh, don’t worry. This section definitely applies to you.

The North Division had a pretty bad reputation this season. It wasn’t helped by the fact that the team that advanced out of its playoff field was Montreal, which finished 18th in the overall standings this year.

There are two potential narratives to be settled on about the North Division once the Canadiens’ run is all said and done. One would be the result of them at the very least playing a competitive series against the Vegas Golden Knights. Maybe they even win it. Maybe they even go on to defeat the Tampa Bay Lightning or New York Islanders and win the Stanley Cup.

In this scenario, the Habs weren’t bad. They just underachieved in the regular season. They were built for the playoffs. They’re those 2012 Kings.

If you’re a Leafs fan, your team suddenly looks a whole lot better. They were one goal away from knocking off the Stanley Cup champions.

The other scenario is the Canadiens look completely outclassed by the Golden Knights. A lot of people seem to be predicting this scenario. Granted, they also predicted it to play out in each of the last two rounds.

In this timeline, every bad thing anyone said about the North Division all year is justified, and every team in Canada looks really far away from winning a Cup. Now all the Leafs did was blow a 3-1 series lead to the worst team to qualify for the playoffs.

And if you’re an Oilers fan? The Habs swept the team that swept your team. If they get swept by Vegas, what does that say about Edmonton?

Shea Weber has had a decorated career. He’s played in 1,038 regular season games over 16 NHL seasons. He’s a three-time finalist for the Norris Trophy as the league’s best defenceman. He’s a two-time Olympic Gold Medalist with Team Canada.

The big man’s legendary slapshot and punishing physical play have long made him one of the league’s most intimidating players to go up against. He’s been the captain of both teams he’s played for, the Canadiens and the Nashville Predators. By all accounts, he’s one of the most respected players in the NHL and considered one of the game’s great leaders.

But not only has Weber not won a Stanley Cup. Prior to this year, he’d never even been past the second round of the playoffs.

Weber turns 36 in August. Given how long it took him to get this deep in the postseason, he surely appreciates this opportunity and realizes there’s no guarantee he’ll get this close to a Cup again.

If the Habs are able to bring a fairytale ending to this Cinderella story, you’d be hard-pressed to find anyone around the NHL who won’t be happy to see Weber accept the Stanley Cup from Gary Bettman.

It’s been a few years since Carey Price has posted particularly impressive stats in the regular seasons. Despite this, his peers around the NHL have continued to insist he’s the best goalie in the league.

.@CP0031 has poise in net, a strong reputation around the league – and the #NHLPAPlayerPoll vote as best goalie for a second season in a row! pic.twitter.com/61qfMkdHK7

This has caused a lot of eye-rolling from people who think the 33-year-old Price is just coasting on his reputation at this stage in his career. But the duality of Carey Price is well-documented at this point. Despite his unimpressive regular season numbers recently, when the playoffs have started, Price managed to return to vintage form.

That led to some optimism that Price had rediscovered his elite form. However, he didn’t carry that over into this season, posting just a .901 save percentage in 25 starts before suffering a concussion in a game against Edmonton on April 19.

But Price returned in time for the start of the playoffs, and he again brought his Superman cape with him. Price is leading all goaltenders with a .935 save percentage in these playoffs.

Does Montreal need Price to play better in the regular season? Yes, but that’s a discussion for another day. Right now it’s the playoffs, and Playoff Price is a different animal.

In fact, he seems to be turning his whole team into something different in the playoffs.

And I think everyone can look forward to what a Carey Price press conference would look like after winning the Cup.

Regardless of how you may feel about Habs fans, you should be able to agree there’s been nobody more spoiled than Golden Knights fans.

The Knights seem to have missed the memo that it’s supposed to take some time to build a team up from scratch to compete in the top hockey league in the world. In four years since joining the NHL as an expansion team, Vegas has enjoyed an unbelievable amount of success. Everything they’ve touched seems to have turned to gold (pun possibly intended).

In their inaugural season, Vegas finished in first place in the Pacific Division and went to the Stanley Cup Final. They haven’t missed the playoffs yet and don’t look like they’re going to anytime soon. They tied the Colorado Avalanche for the best record in the league this season. They’re in the final four for the third time in their four-year history.

They haven’t been particularly humble about their success, either.

is this worth a banner? @PredsNHL https://t.co/2y67mkigYv

Maybe Las Vegas is a great hockey town, or maybe it’s just easy to cheer for a team that’s never done anything but win. I think a lot people are looking forward to seeing this team start losing so we can find out.