It’s no secret the Canucks haven’t had many consistent strengths to speak of since Jim Benning took over the team. The one warm blanket he has enjoyed, however, has been the team’s goaltending.

Whether it was the Ryan Miller-Eddie Lack duo of two seasons ago, the Miller-Jacob Markstrom combo of last season, or the Miller-Miller combination of this year (let’s call it like it is), fact is the goalies have always been very good.

Miller turns 37 in July, and with his contract coming to an end this summer, Vancouver’s goaltending situation is up in the air. Listening to those around the team, you’ll hear different theories on where it’s headed.

Last week, Iain MacIntyre wrote that he believes Miller will not return, with the following explanation:

“Ideally, the Canucks would like to keep Miller for another season while uber-prospect Thatcher Demko progresses in the American Hockey League. But a one-year contract is probably not ideal for the 36-year-old goalie – nor a terribly likely one considering Miller has had an excellent season …”

On the other side, Ben Kuzma spoke on TSN 1040 Wednesday morning, saying he thinks there is a chance Miller comes back. His reasoning:

“The way he’s playing right now, is Ryan Miller not a starter right now? He’s a starter, and where could he be a starter? Right here (in Vancouver).

I mean Jacob Markstrom is not ready. He’s not ready to play 50 plus games yet. He’s got the technical game, but as a starter it’s a whole different mental hurdle. I don’t think he’s there yet. This is why that backdoor is open there.”

Of course, at the end of the day, the only thing that matters is what the people in charge are saying. Trevor Linden has said Vancouver would like Miller back “if there’s a fit that works for him and us.”

On Thursday, Benning added the following, speaking with Global News:

“Goalies can play until they’re 40-years-old now. He’s been excellent for us all season. At the end of the year we’re going to sit down as a management team and review where we’re at and what we want to do with our goalies.

I’ve had some conversations with his agent already and we’ll just see where those go at the end of the year.”

Clearly the Canucks want Miller to stay, and judging from the way Benning’s given Miller everything he’s ever desired – the money and all the starts he could ever hope for – I find it hard to see him not offering the goalie a two-year deal, if that’s his sticking point.

Before they do that, you have to hope they put a plan in place for their succession to Demko as the starter.

The first thing to look at is the factuality of Benning’s statement that goalies play to 40 now. “Graphic Comments,” a Canucks Army writer who goes by @petbugs13 on Twitter, did some work on how goaltenders age a few years ago. He has graciously updated his graphs for me.

This first one shows the number of goalies who have played as a starter at each age going back to 1990 – his cut off is goalies who faced 750 shots in a season with over 250 games played in their careers (that would be about 30 games if a goalie faced 25 shots in each one). 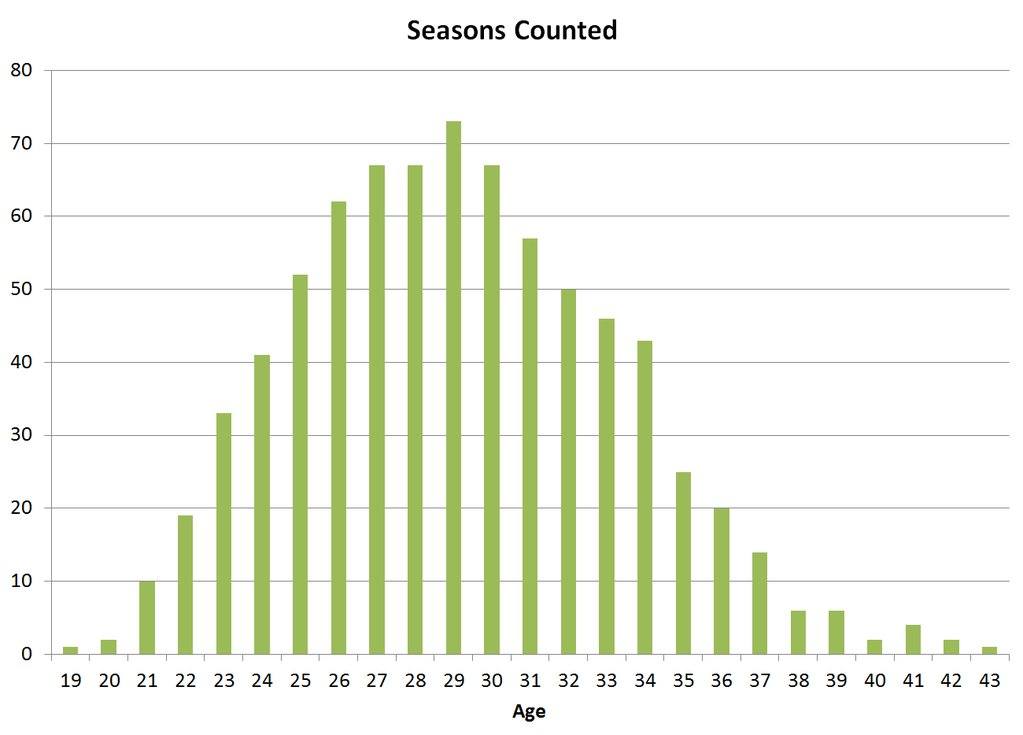 You can see that while Benning’s statement that goalies can play until they’re 40 is factually true, truth is it doesn’t happen too often.

This graph shows the performance of starting goalies as they age. You can see the sharp drop off after they hit 37. 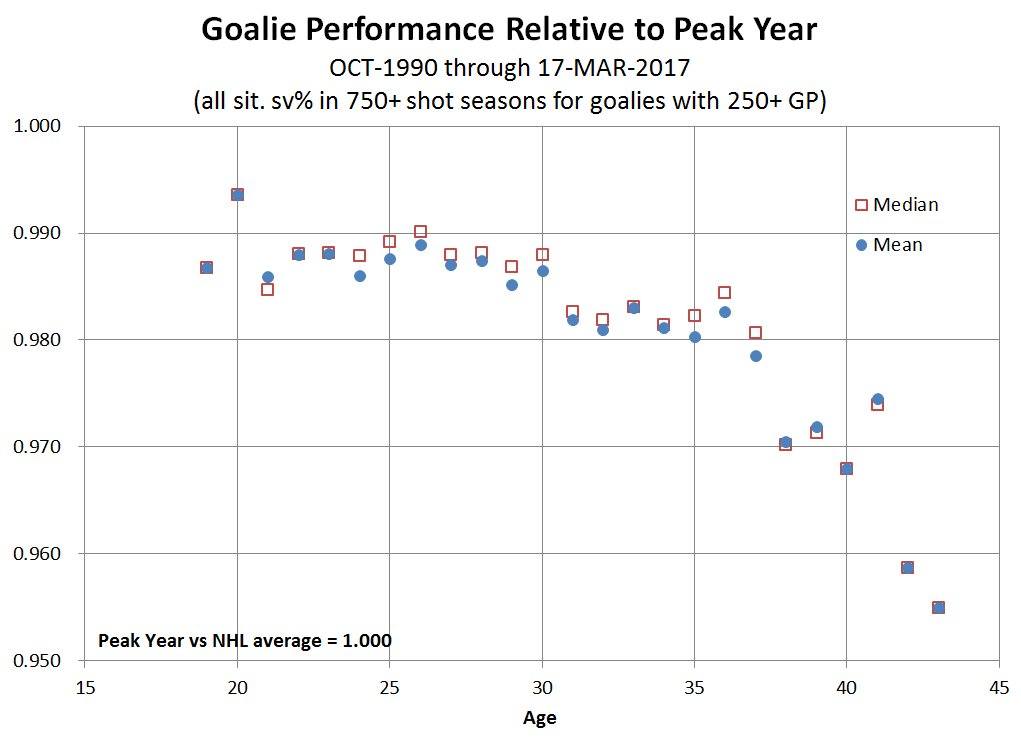 If you’re wondering about outliers or how the greatest goalies have done, one of the few examples of goalies who had exceptional results as they aged is Dominik Hasek.

At 41, Hasek was ranked first in the NHL for save percentage playing for the Red Wings at the time.

Conversely, both Martin Brodeur and Tim Thomas went from having save percentages in the league’s top-15 at 37 to being on the outside looking in at 38. Patrick Roy didn’t even bother, retiring after playing at 37.

What the data shows is any team signing Miller to one-year deal will be taking a gamble, and two-years would be as well thought out as signing a 30-year-old Loui Eriksson for six years.

As Canucks management decides what to do in net, they should consider the following: is this team in the point of their cycle where they require elite goaltending next season, or can they afford some falters?

They had excellent goaltending this season and it hasn’t helped them much in the standings.

With that in mind, Markstrom as the starter and Bachman or whoever else as the backup could hold them over nicely. Somewhere during the season Thatcher Demko will get a look at an NHL game here or there too.

Once Demko’s ready to take over as Vancouver’s main goalie, perhaps as soon as two years from now, the team’s young core should hopefully be ready for him too.

That’s a plan that makes sense for this team.

Note: Thanks to @petbugs13 for his help with this post.