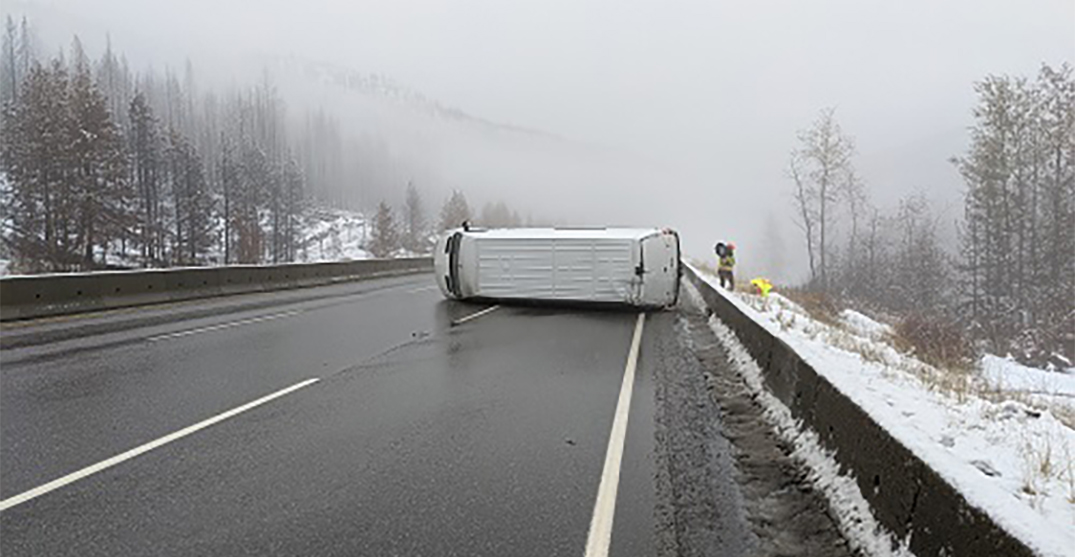 The BC RCMP is cracking jokes on Twitter about poor driver behaviour just days after a serious crash amid wintry conditions on the Coquihalla Highway sent six people to hospital, including two who were taken by air ambulance.

The force tweeted a photo Monday morning of a rolled van between Hope and Merritt, the same stretch of highway where the crash occurred, along with a caption leaning heavily on internet slang.

“No zoomy zoom on the slicky slick or you’ll go boom boom,” the force wrote, along with a link to a news release of the same title advising drivers to slow down.

The larger release even included a poem about driving during winter.

“T’was the end of October in Merritt, and all around, the snow was falling onto the high ground. Vehicles were speeding on highways without care, hoping to make their destinations as quick as a hare. From the mountain peaks there arose such a clatter as vehicles crashed and flipped due to white matter,” police wrote.

Some people are calling the tweet insensitive on Twitter, and advising the force to take it down.

“Haha yes! people rolling their vehicles is hilarious,” one said.

Another chose a confused Spongebob meme.

“You still have time to delete this,” another person said.

You still have time to delete this

Another person used similar language to criticize the police tweet.

Sgt. Josh Roda with Merritt RCMP told Daily Hive the release was not intended to make light of winter driving, but instead meant to grab the reader’s attention and convince them to slow down when snow or ice are present.

“Every year the Merritt RCMP sends out messaging to the public about being prepared for winter driving conditions,” he said. “Unfortunately the messaging never gets any play and year after year our officers and partner agencies attend preventable horrific crashes where speed and driving conditions are almost always the number one factor.”