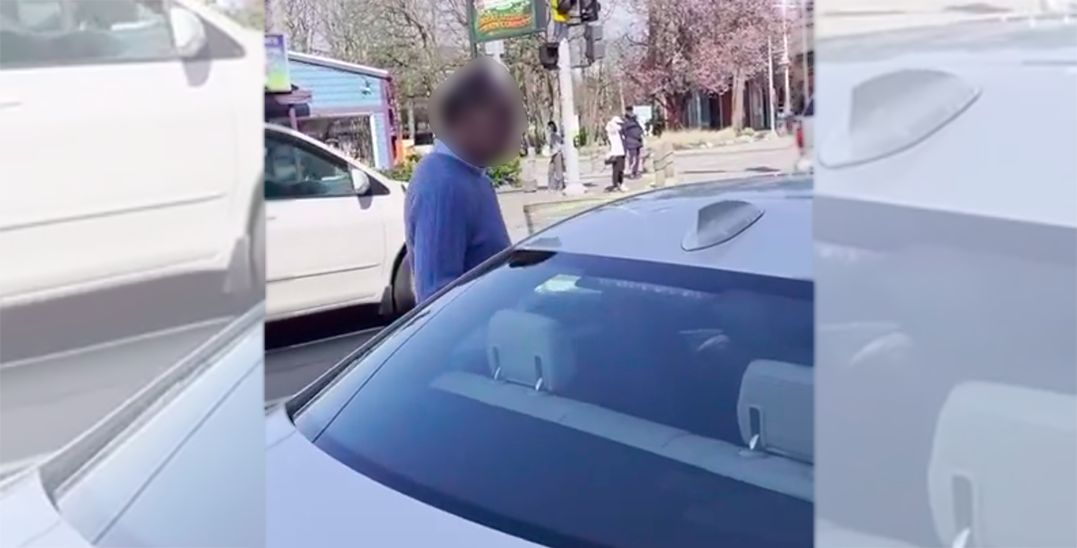 A recent post on social media is detailing a troubling alleged assault involving racial slurs at a coffee shop in Richmond.

Two videos have surfaced on Reddit, the first of which shows surveillance footage of a couple at Rocanini Coffee Roasters in Steveston. There appears to be no indoor seating available, and a man in a blue sweater brings an outdoor table inside the business.

“The male decided to make his own seating area by grabbing an outdoor patio table and chairs that were put away due to seating limits,” writes the Reddit user who posted the videos. “When a table was cleaned and available, they were invited to change seats so that the washroom was not blocked.”

“When the couple refused to move, the male deliberately emptied his mocha on the floor and decided to leave. The woman followed behind but not before throwing her mocha on the manager’s face.”

The second video captures the same couple outside of the business as they walk to their vehicle.

Video contains language that some viewers may find offensive.

A man in the video tells her to “let it go,” explaining that the woman he’s walking with “is not well.”

The video ends with the man making a racial slur and a comment about COVID-19 as he enters the vehicle.

Rocanini Coffee Roasters confirmed with Daily Hive that one of their staff members was assaulted on Monday afternoon and that they had filed a police report.

The incident occurred on the 3900 blocks of Moncton Street — the same location as Rocanini Coffee Roasters in Steveston — on Monday afternoon at approximately 3:15 pm.

“The manager reported an alleged assault involving racial slurs,” reads an emailed statement from police. “Front-line officers responded quickly to the scene where they located and arrested the alleged suspect.”

Corporal Ian Henderson tells Daily Hive that “the manager was allegedly assaulted” and says that the suspect, a 74-year-old female, was arrested.

“Racism has no place in our community,” says Chief Superintendent Ng. “I want to reassure the public that any investigation with potential hate-motivated undertones will be given our full attention and oversight.”