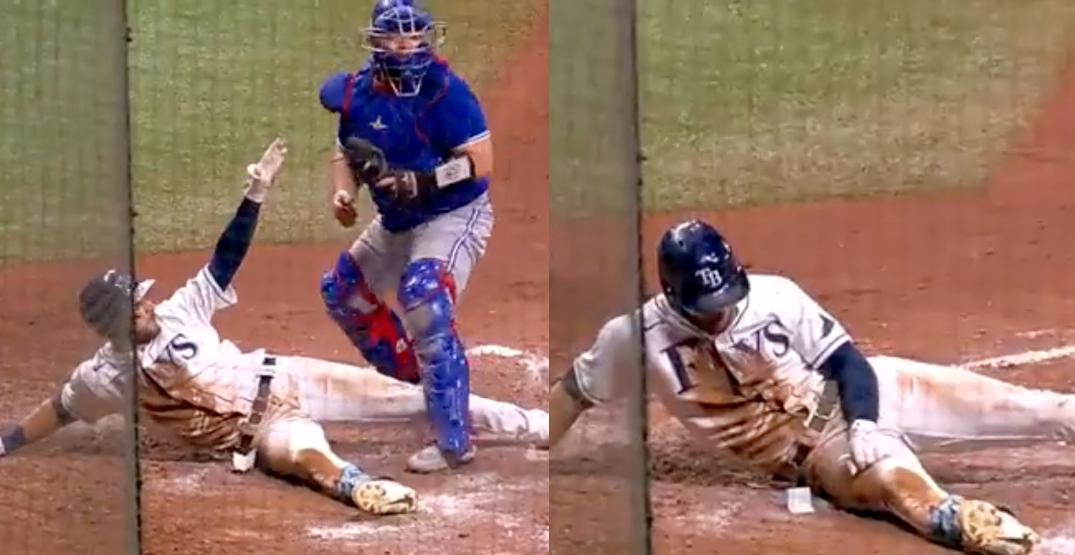 Everyone has experienced this moral dilemma; you see a 20-dollar bill on the sidewalk. Do you pick it up and go about your day, or do you try to find its rightful owner?

Well, the same sort of thing happened to the Blue Jays during Monday night’s game at Tropicana Field, except instead of a $20 bill, it was priceless information.

The Blue Jays are not happy.

Last night in the 6th, Kevin Kiermaier slid into home plate and grabbed a card (video here). That card, I'm told, was from Alejandro Kirk's wrist band that fell out on the tag.

On the card: the Blue Jays' game plan on pitching to Rays' hitters. pic.twitter.com/wjjuYd3Bhk

It wasn’t just any card, this had proprietary scouting information the Blue Jays use against opposing Rays hitters. This was the last piece of intel the Blue Jays wanted to the Rays to get their hands on. And while it was by accident, there are a lot of things at play here.

Did Kiermaier “cheat” by picking up the card and bringing it back to the dugout? He explained to Madani in a thinly veiled apology/follow-up interview he was in the heat of the moment and wasn’t sure what he scooped up at home plate.

One thing Kiermaier was adamant about was he wouldn’t hand the card back to the visiting team.

Cheating? No. Unsportsmanlike? Somewhat. But the real travesty in all of this was the Blue Jays asked the Rays to return the card, but Tampa Bay said no. That’s more egregious than Kiermaier grabbing the card, even if he thought it wasn’t his.

It’s kind of like stumbling across the teacher’s answer book, then refusing to give it back. In this era of baseball, information is a weapon. By gaining access to the Blue Jays’ information, the Rays will probably weaponize this data as best they see fit.

But that’s what happens when propriety information is there in plain sight; on catcher’s armbands and outfield alignment cards in player’s back pockets. Unless the Blue Jays coded the information, it was right there for the Rays to take advantage of.

Not only are the Blue Jays facing the Rays for two more crucial games, but if Toronto makes its way into the Wild Card game and advances to the next round, guess which team they’d face in the ALDS? The Tampa Bay Rays.

As if these late-September games weren’t crucial enough for the Blue Jays, this latest development just sent this series (and potential future postseason meet-ups) into overdrive.