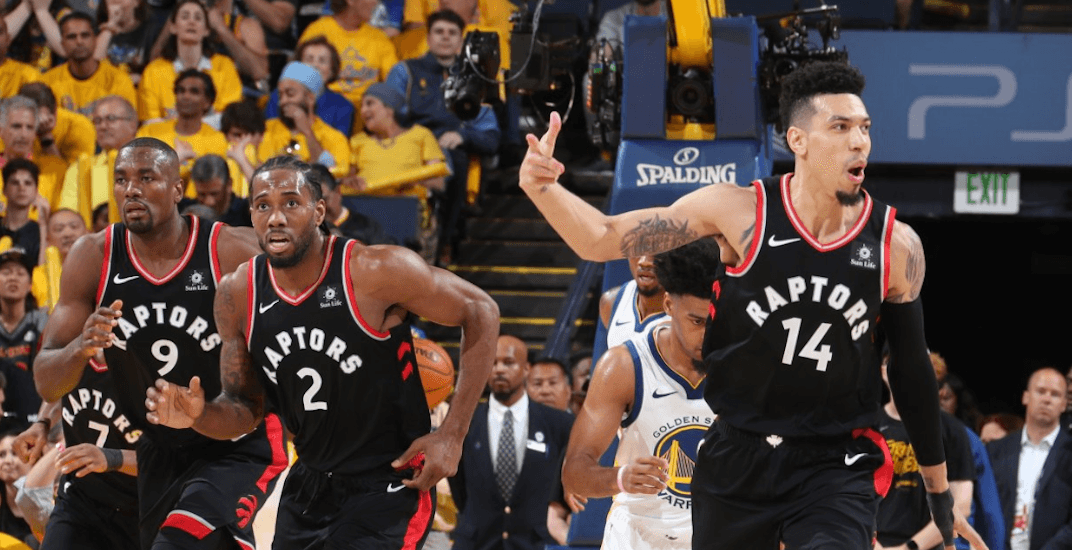 If the fans at Oracle Arena were expecting the Golden State Warriors to take a lead in Game 3 of the NBA Finals, they were sorely mistaken.

Despite a herculean 47-point effort by Steph Curry, it was no match for the Toronto Raptors as they handled an undermanned Golden State team with ease in a key Game 3 victory.

The Raps took the lead a minute-and-a-half into the first quarter and never relented, leading wire-to-wire over the Warriors on their home court. Ultimately, the Raptors won with a comfortable 14-point margin of victory to take Game 3, 123-109.

The big story leading into tipoff was “will they or won’t they” in regards to the Warriors starting their All-Star guard, Klay Thompson. Golden State opted to play it safe and ruled him out for Game 3 in hopes he’ll be ready for Game 4 on Friday.

With Thompson out and Kevin Durant still questionable for the Warriors, the Raptors went to work and dismantled everyone on the Warriors roster not named “Steph Curry”. Every Raptors starter scored double-digit points, with Kawhi Leonard picking up 30 points himself.

It was the 13th game during this Raptors playoff drive where Leonard scored 30 or more points. The man continues to put forth one of the best playoff appearances ever, averaging over 30 points a game in the playoffs this year.

The Raptors kept their foot on the gas over the Warriors, leading in 10 of 12 quarters thus far in the NBA Finals. Remarkably, they’ve trailed in only two quarters through the first three games against the Warriors.

Danny Green came up big in Game 3 and is finally starting to look like the clutch three-point shooter he’s been all along.

After being held off the board from the three-point line in the final three games of the Eastern Conference Finals, Green drained six three-pointers and now has 11 total three-pointers during this NBA Finals run.

While the Warriors’ offense was mostly a one-man show, the Raptors spread their scoring around, with all five starters scoring double-digit points. Even Fred VanVleet came off the bench to contribute 11 points and 3 assists.

The Raptors shot 52.4 percent as a team from the floor, while the Warriors shot 39.6 as a team. Toronto got many open looks during the game and they often didn’t miss. Exhibit A below.

As the NBA Finals shifted to the Bay Area, the Golden State Warriors were back on home court for the first time since Game 5 of the Western Conference Finals. The Warriors went 20 days in between home games at Oracle Arena.

Curry was omnipresent on the floor, but the rest of his teammates seemed to fade into the background. Draymond Green chipped in 17, Andre Iguodala contributed 11, while every other Golden State starter was limited to single-digit points.

The Raps were nothing but net from the arc in the first half, shooting 38.9 percent. Three-pointers like this one from Kyle Lowry were a big reason why the Raps fended off the Warriors in the first half.

The Raptors arguably let Game 2 get away, so to come back and snatch Game 3 away from the Warriors on their home turf was a colossal win. If there’s any solace, they can rest easy knowing they have Game 5 (and 7 if they need it) at home at Scotiabank Arena.

It might be hard to believe, but the Raptors are now two wins away from an NBA Championship and have home-court advantage through the rest of this series. Game 4 goes Friday at Oracle Arena once again before the series turns to Toronto on Monday for Game 5.