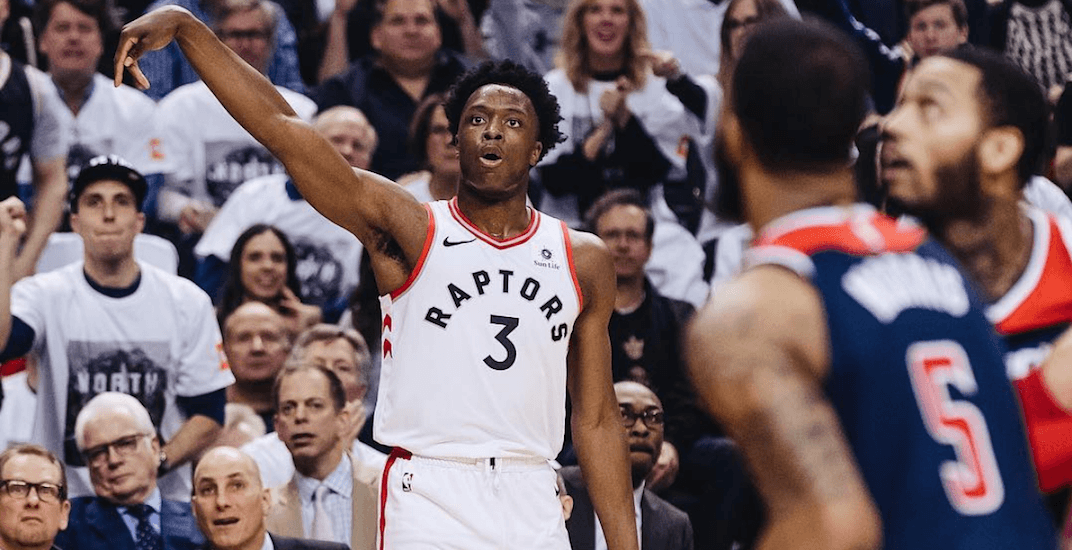 The last time the Toronto Raptors won a Game 1 in the playoffs, Vince Carter was the team’s highest scorer and Jean Chretien was the prime minister.

On Saturday, #Raptors will try and avoid extending the record for consecutive Game 1 losses in NBA history pic.twitter.com/TSlYcn1fDp

Having never won a Game 1 of a first-round series, the Raptors made team history on Saturday, beating the Washington Wizards 114-106.

The Wizards gave Toronto a good test, holding a four-point lead over the home team at the half. DeMar DeRozan scored 12 points in the third, giving the Raptors a one-point lead heading into the final quarter.

That’s when the Raptors took control.

After Mike Scott fouled Kyle Lowry with a flagrant foul early in the fourth quarter, the Raptors went on a 7-0 run. They wound up outscoring Washington 26-15 after the foul.

Toronto’s team-game was once again on display on offence – six players finished in double digits in points – but it was their fourth-quarter defence that was most impressive.

Wizards guard John Wall was shut down by Toronto in the fourth quarter, unable to score a field goal until the final minute.

Serge Ibaka led the way offensively, scoring 23 points and grabbing 12 rebounds. With Fred VanVleet out of the lineup with an injury, Delon Wright stepped up with 18 points off the bench.

OG Anunoby scored 12 points in his first-ever playoff game, while CJ Miles went 4-7 from three point range, knocking down a pair of big shots in the fourth quarter.