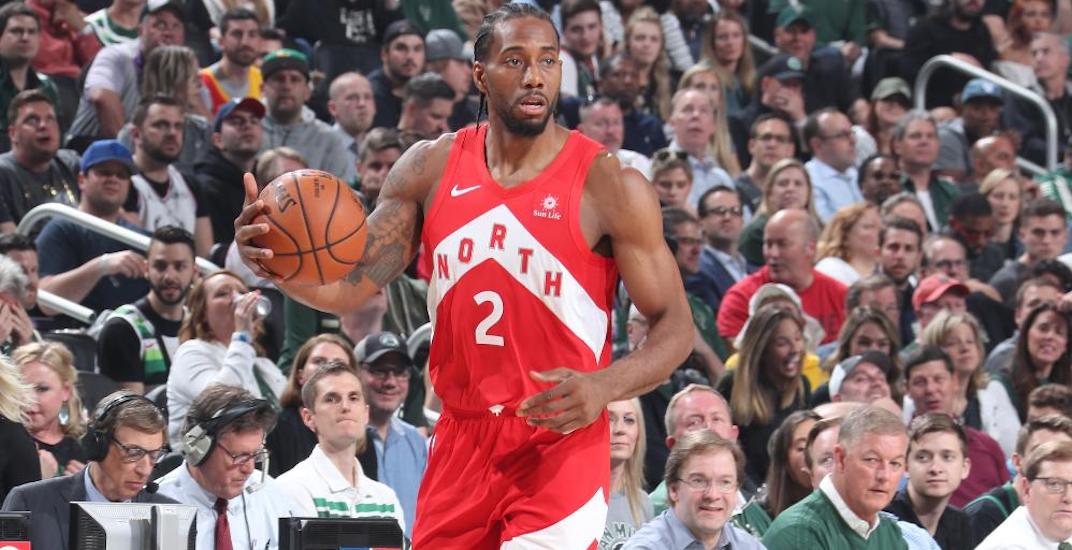 The Milwaukee Bucks hadn’t lost three games in a row the entire season. That was until Game 5 of the Eastern Finals. The Toronto Raptors handed the Bucks their third consecutive loss on Thursday and now lead the series 3-2.

The Raptors overcame a 14-point deficit in Game 5 and now they’re one win away from a berth in the NBA Finals. The Raps can finish the series with a win at home in Toronto on Saturday night.

With 16 seconds left in the game, a two-handed slam by Pascal Siakam sealed the deal for Toronto en route to a 105-99 victory.

The Raptors stunned Milwaukee on their home court, even though the Bucks leapt out to an 18-4 lead with 7:17 to play in the first quarter. No matter for the resilient Raptors who chipped away at the lead and went ahead for good in the fourth quarter.

Kawhi Leonard continues to be a force of nature and is beefing up his resume for the best playoff performance by a Raptors player ever.  Leonard scored 35 points, contributed seven rebounds, and shot 8-for-9 at the free throw line.

Kawhi dropped 30-plus points for the 11th time during this postseason run for the Raptors.

The Raptors as a team looked shaky in the first half, shooting 35.7% from the field with Leonard leading all Raptors shooters with 13 points and three rebounds. They flipped the script in the second half, turning it on after halftime, thanks in part to 15 points in the fourth quarter from Kawhi alone.

The Bucks shot out to a double-digit lead in the third quarter, building back the double-digit lead they started with in the first quarter. Heading into the fourth, the Bucks clung to a three-point lead with the Raptors breathing down their neck.

Along the way, Kyle Lowry set a new Raptors franchise record for postseason points. He surpassed the previous leader, DeMar DeRozan, who held the record with 1,117 playoff points for the Raptors. Lowry contributed 17 points and seven rebounds in his 66th postseason game with the Raptors.

Fred VanVleet came alive in Game 5, scoring 21 and sinking seven three-pointers. The 21 points in Game 5 were by far the most of his playoff career in a single game. After scoring a combined 23 points through Games 1 to 4 against the Bucks, VanVleet found his footing in Buck country and shot an insane 77.8% beyond the arc.

Two of the Raptors’ starters — Marc Gasol and Danny Green — were held off the board for most of the game. Green came up empty yet again, contributing zero points with 15:30 of playing time. It’s the third time in this series that Green has been held pointless.

At this point in the playoffs, Green’s essentially switched bodies with VanVleet, a la Freaky Friday. Where Green can’t make a three to save his life, VanVleet has stepped up and is contributing starter minutes and starter points off the bench.

Gasol didn’t score his first point of the game until 4:54 left in the game, but it was a big three-pointer and at least he contributed on defence for the Raptors.

Credit to the Raptors who played a fairly tight game for 48 minutes, surrendering only eight turnovers to the Bucks. That’s one of the main reasons why the Raps were able to keep the game so close, despite shooting 36.9% as a team from the floor.

Now that they’ve won three straight against the Bucks, the Raptors will go for a fourth straight win and a series victory at home in Toronto on Saturday night. This is the closest the Raptors have ever come to an NBA Finals in franchise history.

Game 6 on Saturday (8:30 pm ET / 5:30 pm PT) is the most crucial game in franchise history and Raptors fans will be on pins and needles.

Back in 2016, Toronto lost the first two games of the Eastern Final to LeBron James and the Cleveland Cavaliers. The Raps rallied to tie the series at 2-2, only to fizzle out and eventually lost the series 4-2 to the Cavs.

This time, the Raps can rewrite history and punch their ticket to the Finals with one more win over the Bucks.