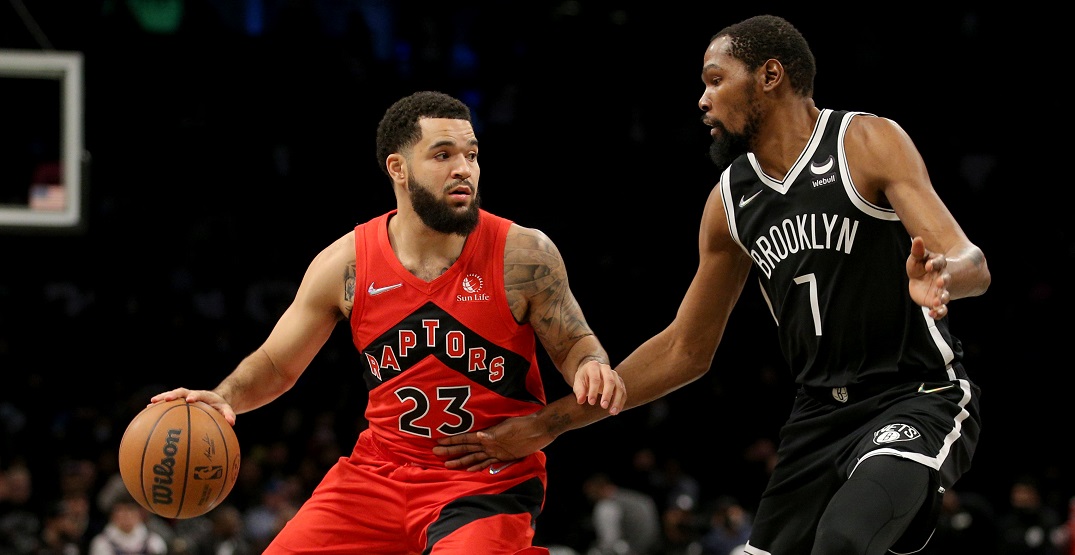 The likelihood of Kevin Durant ever playing for the Toronto Raptors shot up exponentially on Thursday afternoon.

The Athletic’s Shams Charania reported that amid an already chaotic offseason in Brooklyn, star forward Durant has requested a trade away from the Nets.

Kevin Durant has requested a trade out of Brooklyn, sources tell @TheAthletic @Stadium.

The news comes following Kyrie Irving opting to return to the Nets on a $36.5 million player option for next season.

The Athletic’s Sam Amick added that the Nets are “expected to keep” three-time All-Star Ben Simmons, who was traded as part of a multi-player deal in exchange for James Harden last season, but has yet to suit up for Brooklyn.

Source close to the situation tells @TheAthletic that the Nets are expected to keep Ben Simmons. Some had rightfully wondered if there would be a ripple effect here on the 25-year-old's Nets future. https://t.co/2TnO6n71xI

At age 33, Durant has a massive contract: four years left at a total of $189 million, which carries him through to the 2026 season.

But he’s also still shown to be one of the NBA’s premier talents, making his 12th All-Star game this past season, finishing 10th in MVP voting, and averaging 29.9 points per game.

Raptors fans have been all over this one for a while though, having spent the last week dreaming up trade possibilities for Durant.

Raptors forward Scottie Barnes had his own take on the news (or so it seems!), via his Instagram story.

And to top it all off, he’s got a major fan in one of the newest Raptors. 2022 second-round draft selection Christian Koloko, who’s teased a #35 jersey on his Instagram, said he grew up as a big Durant fan and that is the reason why he picked that number.

While we don’t quite know KD’s destination yet, it at least appears possible that the Raptors could be a suitor, with a plethora of young assets on next season’s roster. Fire up the trade machine.