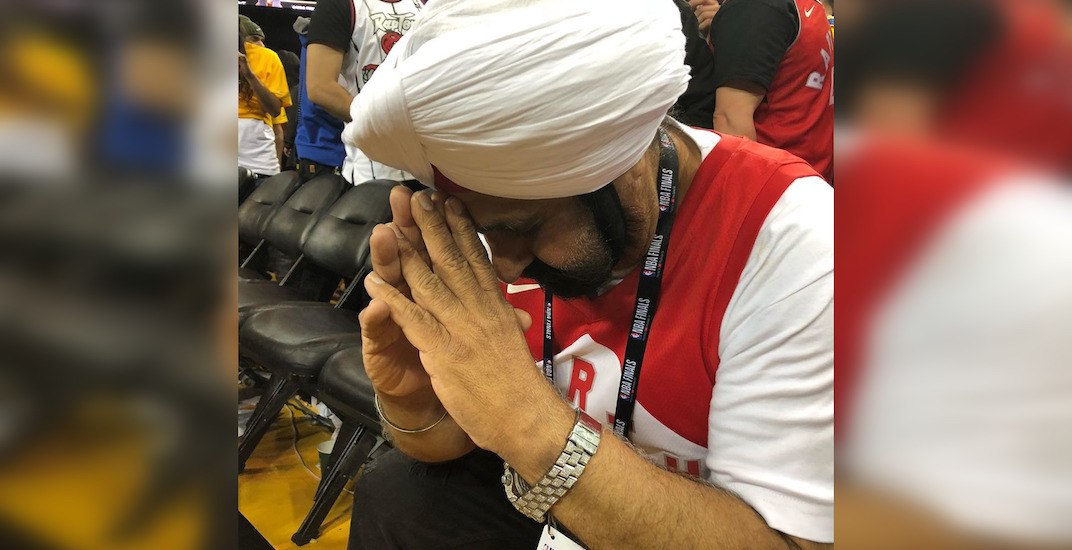 That’s the message from Superfan Nav Bhatia after Toronto Raptors fans conducted themselves shamefully during and after Game 5 of the NBA Finals.

Raptors fans cheered when Kevin Durant suffered a serious injury, were caught on camera punching a Warriors fan on the street, and were heard hurling abuse towards Steph Curry’s parents.

It’s been a rough couple of days for fans since, as many have felt ashamed about what transpired.

Bhatia owned the incident on behalf of Raptors fans, and apologized. Making no excuse for what happened, he called the actions of Raptors fans ‘un-Canadian’ and urged his fellow supporters to be better in the future.

His words – both written and in the video – were wise and inspiring.

“I spent some time today reflecting on Game 5. On what transpired,” Bhatia wrote in an Instagram post. “I read and heard a lot of the same stuff.”

“I can tell you I have NEVER cheered when a player has gone down.”

“Believe me I want this ring more than anyone but I want it knowing we competed at the highest level for it.

“I want it knowing we respected our competition and their fans.

“That’s how I hope to get that ring.

“And even more so than the ring I want Kevin Durant to be healthy.

“I hope you will join me in wishing our fallen brother the best.”

Here’s the transcript from the video:

This is a tough video to make. It is such an exciting time for us in Toronto and across Canada. Our Raptors are one game away from the championship.

We are proud. We are passionate. We let our emotions get the best of us.

And I say ‘us’ because whether you cheered or not (for Durant’s injury), it makes no difference to me. We stand together in the good and the bad.

Instead, we acted un-Canadian as I have seen.

I would like to apologize to KD, the Golden State Warriors, and all the Warriors fans. We acted in the wrong. We got overzealous.

Now it’s time to show the world we are not that. We are passionate and compassionate. We should not wish bad health on anyone. Playing, or not.

We love our team, but we have respect for any athlete, coach, or referee who is a part of this amazing NBA.

It doesn’t matter who they play for. They are all our brothers.

When they are down, we got to pick them up.

So I’m asking all Raptors fans to join me and wish KD a speedy recovery. An NBA without KD is not a better NBA.