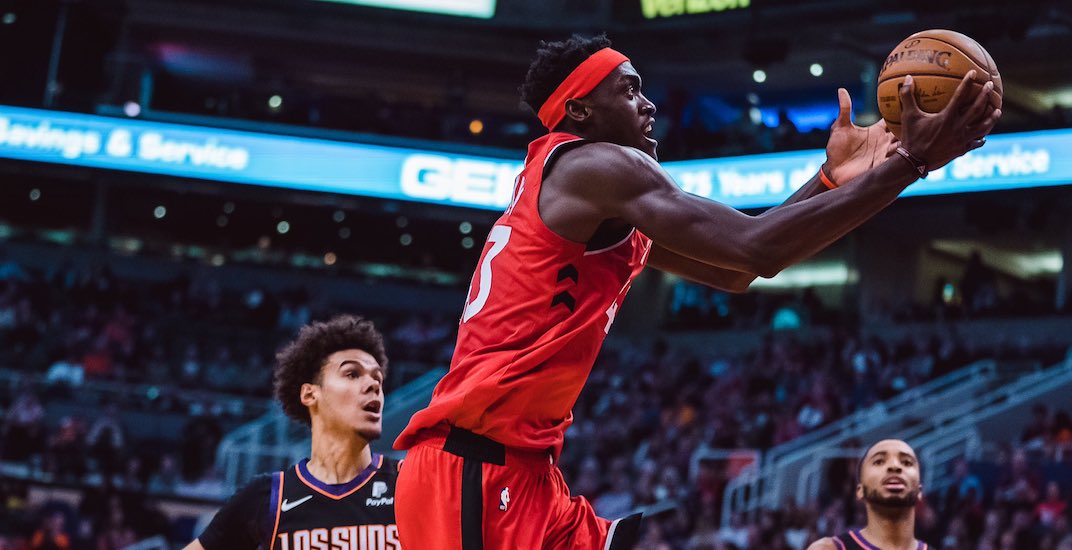 Last summer Pascal Siakam earned plenty of hardware to sit atop his mantle.

He deservedly won the Most Improved Player (MIP) award, along with bringing the Larry O’Brien trophy north of the border. It was an ascension so rapid that it has few parallels in the history of the league.

From picking up a basketball for the first time to becoming an NBA champion in under a decade, the Cameroon native’s growth read like something from a fairytale.

Entering the 2019-20 season, Siakam became the focal point of Toronto’s offence, no longer taking opponents by surprise with his jarring speed and teleporting spin-moves.

Despite the extra attention, Siakam’s growth has not flattened out. Instead, he has taken the toughest jump of all… the leap towards superstardom.

Typically Most Improved Player recipients are third- or fourth-year players that ascend into the All-Star conversation, just as Siakam did last season. It makes sense; players that were previously afterthoughts are the new, shiny objects that suddenly become household names.

No player has ever won the award twice, let alone in back-to-back seasons.

However, Siakam should not be docked points to repeat because his talent is established. He should be firmly in the discussion as the first repeat winner.

Siakam is the biggest reason that Toronto remains a viable title contender despite losing Kawhi Leonard. He continues to develop his offensive game, expanding the difficulty and distance of his shots which will become crucial in the playoffs.

Opponents’ game plans now revolve around stopping Siakam. Even after hitting the occasional snag given all of the extra defensive attention, it is nearly always followed up by another dominant display.

On Friday, Siakam endured one of his worst games of the season only to rebound with an impressive 33-point performance in Phoenix.

Denver coach Mike Malone on Siakam: “Has anybody ever won the most improved two years in a row. This guy just continues to amaze.” Malone says you always root for guys like Siakam.

There is no doubt that Siakam should be in the thick of the MIP discussion again, but there is also plenty of competition.

This sophomore triumvirate is the face of the league’s bright future. Trae Young and Luka Doncic have matched Siakam’s feat of earning starting honours in the All-Star game, the latter even forcing himself into the MVP discussion. Shai Gilgeous-Alexander is a cornerstone for Oklahoma City and Canadian basketball for years to come.

🚨 @luka7doncic & @TheTraeYoung each beat the buzzer from distance this weekend! pic.twitter.com/3tQRGYqP7A

But can you really award the MIP to players who are just in the second year of their careers?

Granted, the leap that all three of Doncic, Gilgeous-Alexander, and Young have made is astonishing, but it is also an expectation that players will improve with one professional season under their belts. Doncic’s generational talent has put me on the brink of my self-imposed ‘two-year rule’, but it was established that he had superstar potential before he even played a minute in the NBA.

From out of nowhere

Devonte Graham has made a case similar to 2015-16 winner C.J. McCollum, emerging from the end of the bench into a fringe All-Star.

The former second-round pick has taken the reigns as Charlotte’s leader in the wake of Kemba Walker’s departure. The jump in Graham’s scoring and passing numbers is eye-popping and puts him as a dark horse candidate, although his production has slowly tailed off.

Unfortunately, Graham is also doing all of this for a moribund franchise that garners little attention and will not be in the playoffs come April. A leap like this should be appreciated, but the pool is far too crowded with top end talent this year.

The three freshly minted All-Stars fit the typical mould of an MIP winner. Four of the past five recipients of the award were also first-time All-Star inclusions.

Brandon Ingram has been the odds-on favourite for much of the season, putting up a gaudy 24.7 points, 6.3 rebounds, and 4.3 assists per game in his first year with New Orleans since the blockbuster Anthony Davis trade. However, Ingram’s statistical jumps aren’t actually much more impressive than Siakam.

When you factor in Ingram’s lack of impact on a porous Pelicans defence and his team’s inferior record, Siakam’s comparative case strengthens.

Instead, two-way dynamos Jayson Tatum and Bam Adebayo should be Siakam’s biggest threat for the award. Both are defensive stalwarts and linchpins to their team’s success in the Eastern Conference playoff race.

Adebayo is a do-it-all Swiss army knife with an unquantifiable grittiness that translates into wins.

However, if Tatum maintains his month-long superlative offensive stretch for the rest of the season, then another Toronto-Boston rivalry may be brewing. The third-year wing hasn’t been as consistently impressive as Siakam, but has now seemingly turned a corner to an All-NBA level and could bring the MIP trophy to Boston for the first time ever. The Raptors and Celtics are jostling for the crucial second-seed position in the Eastern Conference, and whichever team’s All-Star wing shines brightest will determine the winner of that race.

Numbers and history suggest that Siakam is unlikely to repeat as MIP this season. Voters often get blinded by recency bias with the fun new star, but his continued growth towards superstardom on a title contender should merit some serious discussion.