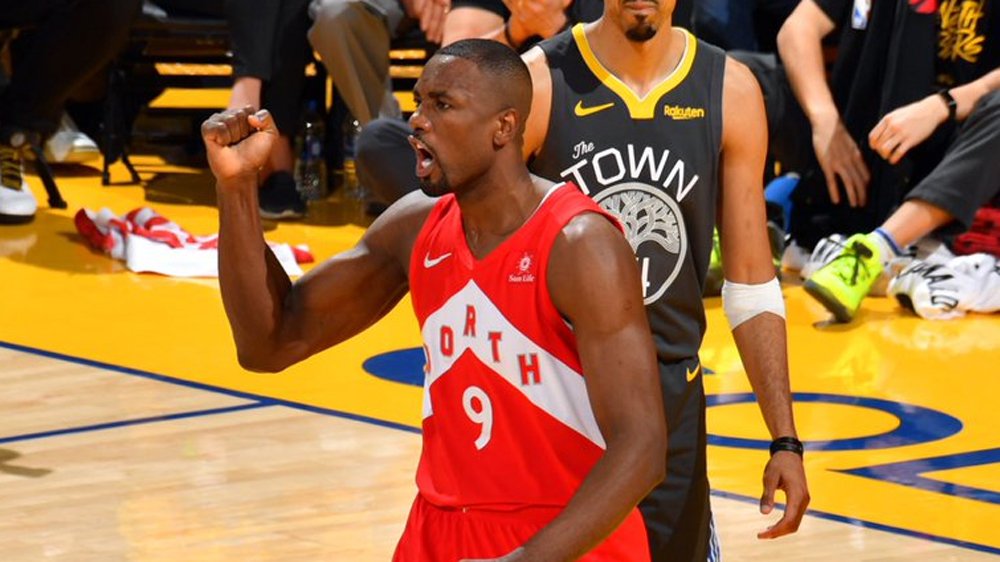 After defeating the Golden State Warriors 105-92 and winning consecutive games at Oracle Arena, not only do the Raptors have home court advantage for the rest of the series, they could close things out as early as Monday.

By game’s end, the home crowd at Oracle Arena were left stunned as many flooded for the exits before the final buzzer blew. As “LET’S GO RAPTORS” chants erupted from the stands, the visitors put the finishing touches on Game 4 and have all the momentum as the series turns to Toronto.

Once again, the story for the Raptors was all about Kawhi Leonard. The man was money in the bank, scoring 36 points and surging past the 30-point mark for the 14th time during this Raptors playoff drive.

He joins some exclusive company among LeBron James, Kobe Bryant and Allen Iverson as the only players since 2000-2001 to record 30-plus points in 13 or more games during a single playoff run.

After missing Game 3 with a hamstring injury, Klay Thompson returned for the Warriors and was typical Klay Thompson, scoring 26 points and going 6 for 10 in three-point attempts. The man must’ve been running on pure adrenaline because he didn’t look the least amount hobbled on the court.

At half, the Raptors miraculously trailed by only four points, despite shooting 34.1 percent from the floor and going 2 for 17 from three-point range. The Raps couldn’t make a shot to save their life in the second quarter and still somehow kept the game close.

Leonard drained this three-pointer to start the third quarter to give the Raptors their first lead of the game in the second half. For most of the third quarter, it was punch-counterpunch between Toronto and Golden State, but the Raps eventually pulled away.

Who would’ve guessed that Serge Ibaka would score the second-most points for the Raptors in Game 4? Ibaka came up with a big block on Steph Curry here and the big man responded by delivering a clutch three on the other side of the court.

After chipping away for the better part of two quarters, the Raps finally expanded their lead to double digits and led Golden State 79-67 heading into the final quarter. After trailing by 11 early in the game, Toronto stormed back in the third like a team possessed.

Fred VanVleet has been one of the Cinderella stories for the Raptors during this playoff run, but there was a scary moment in the fourth quarter as he battled for the ball near the bucket and took a nasty elbow to the head.

This man is the definition of “putting it all out on the court”.

VanVleet went back to the trainer’s room and received seven stitches and also lost a tooth in the process. Yes, a tooth. Any chance he can stuff this thing under his pillow tonight and the tooth fairy will reciprocate with a Larry O’Brien trophy?

In the end, the Raptors overpowered the Warriors as Toronto handed Golden State their second consecutive defeat at home. Including the regular season, the Raps tally their third win this season on the road at Oracle Arena, which is unheard of.

One more win, that’s all the Raptors need to take the Larry O’Brien trophy. They’ll have three more opportunities to do it, but they’d love to have this thing wrapped up in five games in front of the home crowd.

History could be made on Monday. Buckle in, Raptors fans … and maybe put a bottle of bubbly on ice, just in case.