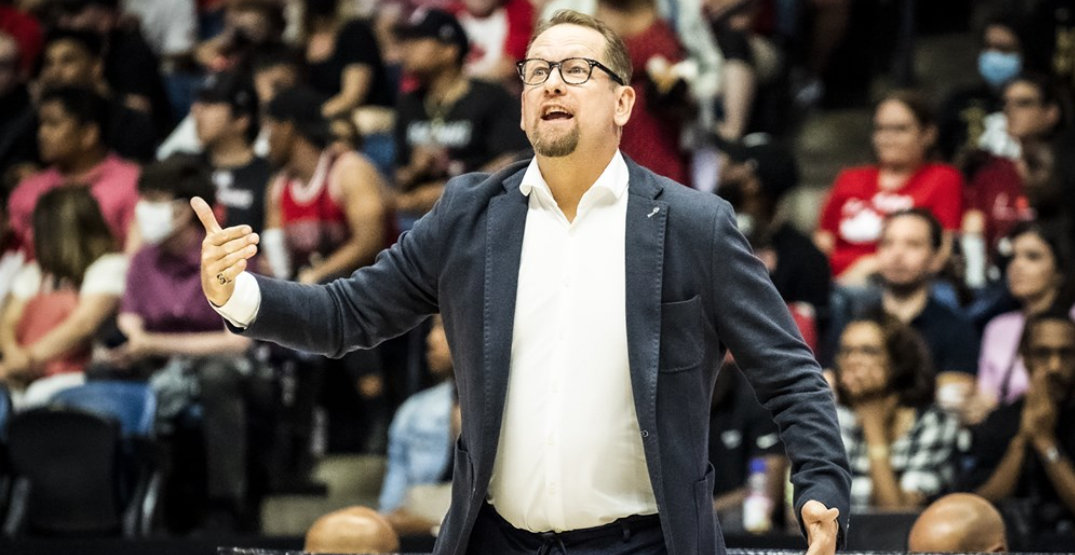 It might only be a part-time job for Toronto Raptors coach Nick Nurse, but it’s clear he understands the gravity of taking the reins of the Canada men’s national team.

Nurse took over as the Canadian men’s team coach in June 2019, less than two weeks after claiming the Raptors’ first NBA title. He’s spent nine years in Toronto since joining the Raptors organization as an assistant in 2013, before being promoted to the head coaching role in 2018.

“I did not grow up here but I’m coming up on 10 years [living in Canada],” the Iowa-born Nurse said. “I’ve been here a long time now, I certainly consider it home.”

Asked Nick Nurse about what it’s like coaching the Canadian national team as someone who grew up in Iowa.
“He’s Canadian,” SGA interrupts. pic.twitter.com/GX5l6HvRMK

While he’s had success at the NBA level — three playoff appearances in four seasons, an NBA coach of the year award, and yes, an NBA title —  it hasn’t always been a pretty ride for Nick Nurse as part of the Canada Basketball contingent. Canada missed out on qualifying for the Tokyo 2020 Olympics (played in 2021 due to a COVID-19 related postponement).

“I got my wheels in my brain turning about how to make this program better,” Nurse said.

On Friday, Canada took to the floor in Hamilton, downing Dominican Republic 95-75 in a 2023 FIBA World Cup qualifying match. Canada is 5-0 through their first five matches in the first round of qualifying, as they have advanced to the second stage with one match remaining.

The full roster features 12 NBA players, with four suiting up on Friday.

The game also served as a homecoming for Oklahoma City Thunder star, Shai Gilgeous-Alexander, who hadn’t played in Hamilton since his time playing high school basketball in the region from 2013-16.

“It was so fun, knowing that all the people who have seen me grow from when I was in high school to see me play today, it’s something I can’t describe,” Gilgeous-Alexander said. “It went just how I wanted to.”

The man they call ‘SGA’ led Canada in scoring with 32 points, including a team-high 16 in the 10-min third quarter alone. It also offered the chance for him to play with his cousin, Utah Jazz guard Nickeil Alexander-Walker.

Canada plays in their next on Monday on the road to the Virgin Islands to close out the first round of FIBA Americas qualifying, with the second round being played in three separate windows in August, November, and a final round in February.