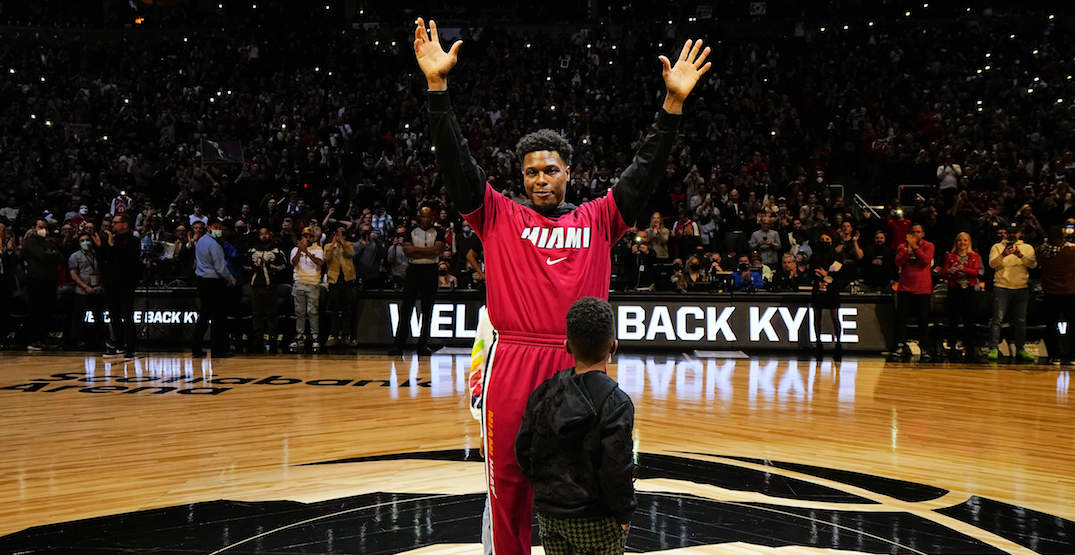 Not that there was ever any doubt about the connection Kyle Lowry had with Toronto Raptors fans, but his latest ovation pushed that relationship to the next level.

Following a tribute video that Lowry watched alongside his sons, Raptors fans gave Lowry a lengthy standing ovation prior to Sunday’s game against the Miami Heat.

A standing ovation for Kyle Lowry as the @MiamiHEAT come out to warm up. 👏#WeTheNorth | @Raptors pic.twitter.com/6en615dyKP

Lowry had missed three prior Miami-Toronto matchups earlier in the season due to personal issues.

He averaged 17.5 points, 7.1 assists and 4.9 rebounds in 601 games for the Raptors in his career across nine seasons.

Of course, the pinnacle of his Toronto career came when Lowry served as the team’s starting point guard on Toronto’s 2019 championship roster, the team’s first NBA title in franchise history.

Last summer, Lowry left Toronto to join the Miami Heat, in a sign-and-trade deal that brought Goran Dragic and Precious Achiuwa to Toronto.

“There’s never a moment where these guys feel that they can’t win a game,” Lowry said pregame of this year’s Raptors’ team. “It reminds me a lot of [my Raptors teams], that when we were down 15 in the fourth quarter, we’d find ways to win games.”